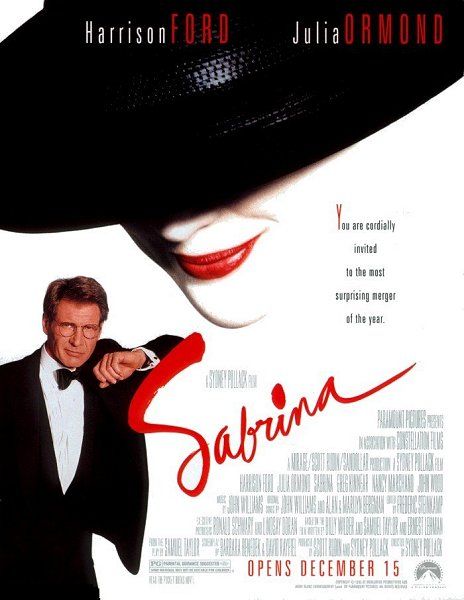 SABRINA is the perennial fairy tale of a humble chauffeur's daughter who gets invited to the ball. While infatuated with one brother, she falls in love with another. Witty and romantic, it has no sex, nudity or violence, but a few obscenities. Resolving its dilemmas within a moral framework, the film might just steal your heart away.

SABRINA Fairchild (Julia Ormond) is a pretty but plain chauffeur’s daughter, living on the wealthy Larrabee family estate. The Larrabee family includes corporate workaholic Linus (Harrison Ford) and debonair David who plays tennis instead of going to the office. Sabrina is infatuated with David and in awe of Linus. When she returns after a year in Paris, she is sleek, poised and stunning. Although David is engaged to the daughter of a wealthy tycoon whose business the Larrabees want, he turns his attentions to the new Sabrina. Linus steps in to save David’s pending marriage and the merger, but, in the process, Linus manipulates Sabrina into falling for him instead and succeeds all too well.

This modern Cinderella fairy tale is a remake of the 1954 classic. A witty screenplay energized with contemporary observations, puts new charm into an old-fashioned and whimsical story. The characters are colorful and likeable. This is a delightful and moral film in many ways, and promiscuity is merely implied. Some exclamatory profanities, themes of materialistic greed and romantic love serve as major themes, though all is resolved morally in the end. On the whole, SABRINA provides a refreshing breath of fresh air to the torrid tumble of today’s film offerings.