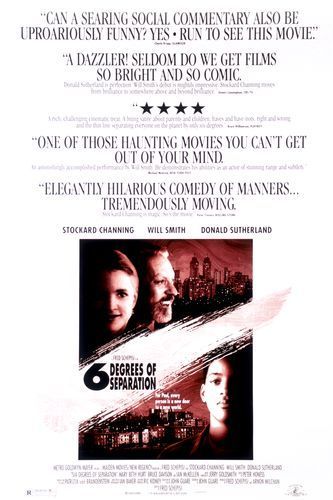 In SIX DEGREES OF SEPARATION, a charming young man who claims to be Sidney Poitier's son, talks his way into the lives and the pocketbooks of several wealthy New Yorkers. With excellent dialogue, acting and art, the movie is a delight to watch.

Perhaps the most exciting and beautiful part of SIX DEGREES OF SEPARATION is the superb artwork decorating the home of art dealers Flan and Ouisa Kittredge. Everything about their home is aesthetically perfect, but their lives are the direct opposite. A charming young man who claims to be Sidney Poitier’s son, Paul, and who claims to know their children at Harvard, comes to stay with them. He also gets acquainted with three other couples whose children are at Harvard. In time, he exposes the dysfunction in the parents’ and children’s relationships. The exposition scene is hilarious, but underneath lies the sad truth that these parents and their children have no relationship.

The dialogue and acting are excellent. Donald Sutherland and Stockard Channing in their lead roles are a treat to watch. Also, Will Smith, who plays Paul Poitier, exudes charm and wit. One CAN imagine how these intelligent people were drawn into believing his fabrications. He is electric. The film hits a nerve as it so specifically pinpoints the void in these unhappy lives. It subtly teaches that money can’t buy happiness. Sadly, it does not offer an alternative. God is not mentioned. The audience is left with an empty, introspective feeling.