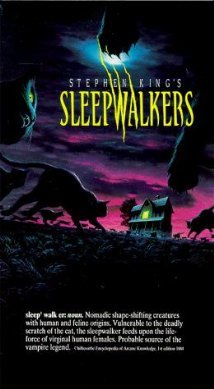 In SLEEPWALKERS, a cat-human teenager attempts to drain the "life force" from a virgin classmate and feed it to his mother by having sex with her. While some may delight in this sick pix, its message perverts biblical parenting, Jesus' virgin birth, communion, and atoning Blood of Christ. SLEEPWALKERS is an evil movie because it exchanges God's truth for a lie.

In SLEEPWALKERS, a cat-human teenager attempts to drain the “life force” from a virgin classmate and feed it to his mother by fornicating with her. The story focuses on Charles Brady, 17, and his mother, Mary. At school, Charles’ teacher discovers his fraudulent transcripts, so to silence him, Charles transforms into a sleepwalker and gnaws on his flesh. When the police arrive, a little magical thinking renders his red Trans Am invisible. Once home, Charles passionately kisses his mother and carries her into the bedroom. Later, Charles befriends Tanya. At the cemetery, a brief kiss mesmerizes Charles into a sleepwalker. Having a slimy, fetal, cat-like appearance, Charles breathes fire into her mouth. The mindlessness continues as Tanya escapes. The final showdown involves police squads and hordes of starving cats.

Aside from being repulsive, SLEEPWALKERS is poorly constructed, with many elements left unexplained or dangling. Of greater concern is the incest, virgin sacrifice, cannibalism, and drinking of blood to sustain life–all condemned by God and all perversions of the biblical models of parenting, Jesus’ virgin birth, communion, and the atoning Blood of Christ.