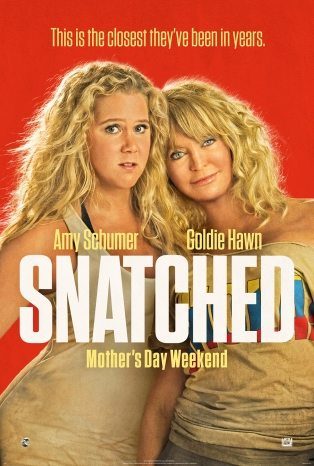 In SNATCHED, Emily, is a young woman whose bad attitude gets her fired from her minimum-wage job. Her plans for a romantic vacation in Ecuador with her boyfriend crash when he unexpectedly breaks up with her. The trip is non-refundable. So, with no one else to accompany her, Emily asks her overly-cautious mother, Linda, to go. In Ecuador, Emily meets a handsome Englishman who promises to sweep her off her feet, but instead leads Emily and her mother into a kidnapping plot. Suddenly, mother and daughter must escape and travel to the U.S. embassy in Columbia in one piece.

SNATCHED has the tone, structure and feel of a classic screwball comedy. It’s fun and never boring, and the humor is genuinely laugh-out-loud funny. That’s why it’s so disappointing the movie goes out of its way to be lewd. Not only is there a copious foul language, but the sexual references are done in a bold style. That said, the main plot in SNATCHED is an old-fashioned good versus evil battle where good eventually wins, although the characters don’t have many moral standards.

Worldview: Light, mixed pagan worldview where characters having no personal moral standards pursue their own pleasures, mixed with a plot where good wins out over evil, plus some feminist elements that make points about the oppression of women, and male characters make what are construed as misogynistic comments, and a few homosexual jokes. Language: At least 81 obscenities and six profanities, plus the middle finger gesture is used, and a character is depicted as urinating on the side of a road.
Violence:
Strong and light violence includes a man getting kicked in the head, man is killed by a shovel to his head, a man is killed by a spear stabbing his throat, guns being drawn, a prison cell with blood stains on the walls, prisoners are threatened to be killed or tortured in several scenes, rape and sexual slavery are mentioned, a dog attacks a man, a car wreck, two women are kidnapped.
Sex:
Lots of sexual content and references include an unmarried couple is implied to be sleeping together, a character talks about the potential of hooking up in several scenes, a boyfriend breaks up with his girlfriend because he wants more sexual partners, a woman is depicted cleaning her private area in the bathroom in preparation for sex, some homosexual jokes, and whale sperm and semen are mentioned.
Nudity:
One scene depicts an exposed female breast.
Other Content:
Several depict drinking alcohol at meals or parties, one scene shows a drunk woman; no smoking, but use of illegal drugs is referenced; and, strong miscellaneous immorality includes a woman disrespects her boss and is fired, a mother and daughter say some hurtful things to each other, a man tricks two women in order to kidnap them, a brother and sister fight, two women are kidnapped for ransom, and a couple is divorced.

SNATCHED is a comedy starring Goldie Hawn and Amy Schumer as a mother and daughter who get kidnapped during a vacation trip to Ecuador. SNATCHED is a solid comedy reminiscent of some classics, but it’s excessively marred by lots of foul language, brief nudity and some crude off-color jokes and situations.

Emily, a financially and life-challenged young woman, braggadociously banters over the clothing racks of a discount retail store about the romantic Ecuador vacation she’s taking with her boyfriend, an upcoming rock star on the New York band scene. After insulting a customer and mouthing off to her boss (who never received a request for vacation time), Emily is promptly fired. Devastated by the sudden loss of income, Emily perks up at the thought of her imminent departure to South America. Over lunch, however, her boyfriend announces that he’s breaking up with her, partially due to her life being a directionless mess, but mostly because he wants to fornicate with a lot of groupies on his upcoming rock tour. Emily does her best to convince him to remain monogamous and rescue her from her misfortunes, but he has his mind on one thing, and it’s not her.

Later, Emily posts her new single status to Facebook, which catches the attention of Emily’s overly-protective mother, Linda. She’s called home for the weekend, where she’s reunited with her thirtysomething agoraphobic brother Jeffrey, who still refers to their mother as his “Mama.” Linda overindulges them in home-cooked food and her herd of indoor cats.

When Emily needs some extra clothes, she pokes around in a closet and finds an old photo album of her mother traveling the world. She realizes what a fun person her mother had once been, so she invites Linda on her Ecuador trip. Linda, who makes sure the doors and windows are firmly bolted at night, declines. Age, experience and divorce have soured her on ever venturing far from home. Despite her mother’s reluctance, Emily eventually manages to persuade her to come on the trip.

Poolside in Ecuador, Linda and Emily are approached by a pair of American women, one a former special ops commander, who cut out her own tongue to keep from being interrogated. They warn the mother-daughter duo of the dangerous conditions outside of the American tourist zone.

However, Emily all but ignores this advice when she meets a handsome Englishman who promises her and Linda adventure as a tour guide through authentic Ecuador. As expected, Linda has her reservations, but agrees to go along.

In the middle of a rural village, their jeep collides with a nefarious-looking van full of hooded men. The women wake up in a jail cell with blood-stained walls, and a notorious Ecuadorian criminal, who threatens death if Jeffrey doesn’t deliver a ransom within 24 hours. The U.S. State Department is of no help, telling them that they’re on their own until they can get to the nearest American embassy in neighboring Columbia.

SNATCHED has the tone, structure and feel of a classic screwball comedy – the type Hollywood almost never makes anymore. It’s fun and never boring, and the humor is genuine laugh-out-loud fodder. The expectations are set high at the very beginning when text appears over black, promising mayhem and destruction.

The movie makes no bones about making fun of melodramatic scenes and has its actors perform them with a sarcastic wink to the viewers. Wanda Sykes and Joan Cusack as Ruth and Barb, the two that warn Emily and Linda of danger, are hidden gems in SNATCHED. Joan’s antics as an overzealous retired special ops officer, and Wanda’s candid sidekick ways provide a perfect comedic out when the kidnappers chase down their escaped prisoners. Another funny part is when Emily and Linda happen upon an American guide in the Amazon jungle, who assures them he can get them to safety. Their hopes sink when they find out he’s only been in South America for three weeks, having just quit his job as a manager at Trader Joe’s.

Despite that, it’s frankly disappointing to know just how good this movie could have been if it had stuck to a clean program instead of going out of its way to be as controversial as comedy will allow in terms of content. Not only is there a copious amount of foul language, but the sexual references are done in a bold, in-your-face style. This is how Amy Schumer generally approaches comedy. She often uses realism and no filter to get her jokes across. Whereas some comedians might hem and haw at inappropriate behavior, Schumer just lets it all out…literally. That said, the main plot is an old-fashioned good versus evil battle where good eventually wins, although the characters don’t seem to have much personal awareness of any moral standards.