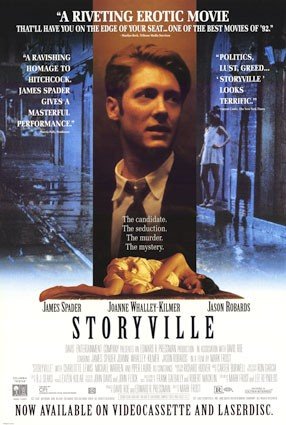 STORYVILLE hearkens back to a number of potboiler films of the 1950s and 60s which dredged up all sorts of nasty goings-on beneath a veneer of gentility in the Old South. Here the subjects are Louisiana politics, sexual misadventures, crooked deals, and skeletons galore rattling in family closets, dished upon with style but needless foul language, nudity and bloodshed.

STORYVILLE hearkens back to the potboilers of the 1950s which dredged up all sorts of nasty goings-on beneath a veneer of gentility in the Old South. Herein, the subject is Louisiana politics, complicated with lots of perversions and skeletons rattling in family closets. Cray Fowler is an ex-public defender running for Congress. Cray’s ambition for public office pales in comparison with his concerns over his father’s suicide three years earlier, and Cray won’t rest until he finds out what really happened. Unfortunately, his hormones interfere both with campaigning and truth seeking. The story continues with truck-sized plot holes, enough to confuse anyone without a scorecard. For what its worth, Cray actually develops a spine and a sense of social responsibility in his determination to offer restitution for some of the problems he’s caused.

To its credit, STORYVILLE has plenty of visual style and competent acting performances, and would have been far more entertaining without the usual 90’s overkill: foul language, nudity, sexual anarchy, and bloodshed. Add to this the generally unredeemable quasi-resolution of several nasty family secrets, and you have good reason to stay home with a good book. Of course, there was plenty of intrigue and betrayal amongst the patriarches and the royalty in the old Testament– but the stories are told with a clear moral compass, and a far better ultimate outcome.