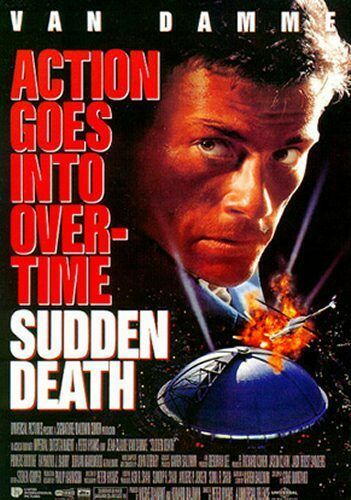 SUDDEN DEATH takes all the conventions of the action-adventure genre and plays them out in a by-the-numbers DIE HARD-like setting. Jean-Claude Van Damme tries to get the bad guys at the Stanley Cup NHL Hockey Championships. It is ultra-violent and ultra-predictable.

In SUDDEN DEATH, Darren McCord, played of course by Jean-Claude Van Damme, is a security guard at the final game of the Stanley Cup, NHL hockey championships. Facing off are the Pittsburgh Penguins and the Chicago Blackhawks. Attending the game is Darren with his two kids. Also attending is the Vice President of the United States and a group of bad security men who are greedy for money. The bad guys, led by Joshua Foss, make their way into the Vice President’s box and lay down their demands: money or death for all in the whole arena. The Vice President, sets his companions at ease as best he can, but Foss starts killing people. McCord inadvertently discovers the diabolical plan and must come to the rescue. McCord defuses bombs and shoots out Foss’s goons. At the final showdown, McCord swings around on some wires to the Vice President’s box, saves the survivors and avoids being crushed by a helicopter that actually falls into the arena.

This may be Jean-Claude Van Damme’s most accessible and best movie. However, that isn’t saying much. He is still just a set of muscles. This movie does not have an obscene amount of obscenities and is somewhat family friendly, showing McCord as a concerned father. This movie does showcase, however, many different ways to die and delights in shocking its audience.