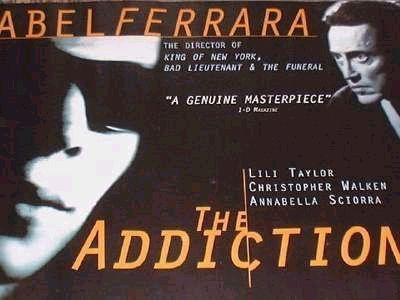 THE ADDICTION is another tale of a blood-sucking vampire in New York. She is post graduate student named Kathleen Conklin, who philosophizes as she drinks the life-blood out of her victims. She finally recognizes she can only overcome the evil within her through redemption. Stylish and sophisticated, the film regrettably labors with self-indulgence, pretentions and gross bloodletting.

(C, B, O, LL, VVV, N, D, C, M) Christian theme of salvation combined with a biblical wordlview marred by the occultic device of vampirism; 13 obscenities & vulgarities & 3 profanities; 10 incidences of vampirism -- biting humans and drinking their blood, & gory & bloody scenes especially one where vampires mob a party; naturalistic nudity of dead victims in actual footages of the My Lai massacre in Vietnam & the Holocaust; positive portrait of street preacher; and, substance abuse through addiction to human blood, some smoking of drugs & cigarettes & rap song describing getting high

Director Abel Ferrara’s latest self-styled celluloid chic is THE ADDICTION, another story about a vampire roaming New York City. Vampire protagonist, Kathleen, in her deepening addiction to human blood, attacks people to satisfy her thirst. She attacks the homeless, students, lecturers, and even party guests. She tells her victims that all they have to do is say “no,” but they are all too weak to confront evil. She gains knowledge of how to manage her evil ways by an experienced vampire played by Christopher Walken. Kathleen falls further in her evil chasm, until she seeks redemption through God’s grace.

The film, shot in black and white, has the artful touch. Yet, it is more pretentious than provoking, more tiresome than taut. The self-indulgent attempts at philosophizing are both superfluous and superficial. Kathleen irritates with her whispering tones which at times are almost inaudible. The theme of the story correctly states that men and women are inherently sinful; therefore, the addiction to evil is inevitable and irresistible. The movie concludes with redemption through God’s forgiveness. Regrettably, the film does not go further to convey that, subsequent to salvation, evil is overcome through reliance on God’s prevailing grace. The film also has some violent scenes with fair bit of bloody-gore.