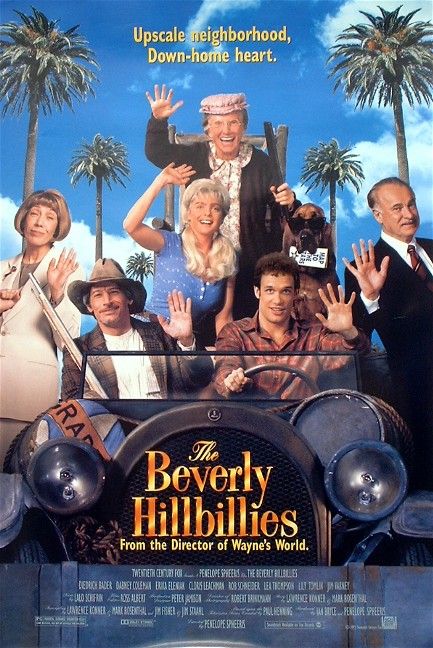 In the screen debut of THE BEVERLY HILLBILLIES, a gold-digging couple attempt to swindle the nouveau-riche Clampetts out of their millions. Although the film contains considerable sexual innuendo and lacks the punch of the 60's hit TV series, the casting is perfect, particularly in the choice of Cloris Leachman as Granny and Lily Tomlin as Jane Hathaway.

The screen debut of THE BEVERLY HILLBILLIES lacks the punch of the hit 60’s TV series, although it is somewhat amusing. The amusement comes from watching those outside mainstream American culture spoof many of our beliefs and rituals. The film also affords an interesting commentary on the American “way of success.” When Jed strikes oil on his Ozark farm, he and his family decide to move to Beverly Hills. Arriving there, Mr. Drysdale, a local banker, and his associate, Miss Hathaway, help them move into a huge mansion but are scarcely prepared for the hillbilly family, and their complete ignorance of societal manners. Jethro tries to find a bride for Uncle Jed, and Jed wants Elly May to become a lady. These twin desires combine in the person of Laura Jackson (Lea Thompson) who disguises herself as a French tutor to Elly May, but in reality, is the mistress of villanous Woodrow Tyler (Rob Schneider). An assistant to Mr. Drysdale, Tyler and Laura conspire to steal the Clampett millions.

This film is perfectly cast especially in the likes of Cloris Leachman as Granny and Lily Tomlin as Jane Hathaway, although the others turn in excellent performances as well. Unfortunately, the considerable sexual innuendo that runs through the movie, and the coming out of character near the end of the film, take away from an otherwise enjoyable film.