"Two Movies for the Price of One" 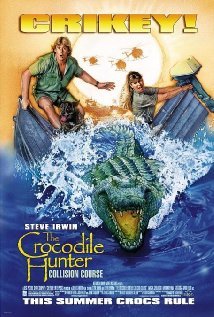 THE CROCODILE HUNTER: COLLISION COURSE stars TV wildlife expert Steve Irwin as he and his wife, Terri, try to save a crocodile while being chased by U.S. government spies after a recording device swallowed by the croc. Steve and Terri get up close and personal with the crocodile, a snake, a lizard, a spider, and a wide-eyed baby kangaroo. Complicating this plot is a feisty widow, who wants to kill the crocodile to stop him from eating the cows on her ranch.

CROCODILE HUNTER: COLLISION COURSE is a schizophrenic movie. All of the shots featuring the Irwins are projected on a mostly rectangular screen, while the shots without them are in widescreen. This makes the movie a weird experience at times, but it doesn’t lessen all the fun. As usual, Steve Irwin is funny and a little bit crazy as the passionate wildlife expert. His wife brings a warm, stable presence to the proceedings. Younger children may get a little bit scared by some of the encounters with the wild, dangerous animals. Despite the movie’s lightweight Romantic, environmentalist worldview, however, CROCODILE HUNTER is good family-friendly entertainment. It’s one wild, fun ride

(Ro, E, BB, L, V, M) Light Romantic worldview with some Environmentalism, but pro-family, moral elements make for mostly wholesome family entertainment; about five light obscenities, Australians say, “Crikey!” a lot, woman says “nuts” several times, plus brief talk of animal “poo” and several shots of lizard and crocodile manure; some scary violence with handling and capturing snakes, a spider and crocodiles that may scare young children or people with phobias, plus some action violence such as crocodile attached to rope pulls people on boat, spies chase people on boat, explosions, use of dynamite, gunshots, and man fires gun at spider; no sex but man pats wife on behind during affectionate moment; no nudity but female cleavage in one scene and sexy spy, but nothing really revealing shown; no alcohol use; no smoking; and, stealing and man leaves people who tried to kill him in river with crocodile who might be nearby, but people swim safely to shore.

Those who don’t get the Animal Planet channel on Cable-TV or satellite may be unfamiliar with one of that channel’s star attractions, THE CROCODILE HUNTER. Starring Steve Irwin of Australia Zoo Wildlife Reserve and his nature-loving wife, Terri, the show mostly features Steve chasing and handling wild animals, especially deadly snakes and hungry, territorial crocodiles. Terri, who started her own wildlife rehab facility near her hometown of Eugene, Ore. before meeting Steve, appears to lend support to her husband and provide narration for THE CROCODILE HUNTER and other TV shows, including CROC FILES for children and documentary specials. The Irwins’ primary goal in all of these shows is to educate people about wildlife conservation.

What makes their shows fun to watch is the child-like enthusiasm that Steve displays for getting up close and personal with the animals, many of them very dangerous ones that could harm him or even kill him. His passion for animals can be traced back to his parents, Bob and Lyn Irwin, the conservationists who founded Australia Zoo. As a young boy, Steve helped his father rescue and relocate crocodiles in the rivers of North Queensland in Australia.

This summer Steve and Terri have taken their popular show onto the big screen, in a movie directed by their long-time associate, television director John Stainton. The movie combines their documentary-style television shows with a plot involving a hunt by the government of the United States for the cone-shaped recording device of a fallen satellite, which has been eaten by a crocodile.

The crocodile has been harassing a feisty widow who runs a ranch full of cows and guard dogs, played by the woman who starred as the farmer’s wife in the BABE movies, another popular export from the Land of Down Under. Naturally, the widow wants to shoot the crocodile dead, so the local government ranger calls in the Irwins to rescue the crocodile. When government agents come to retrieve the recording device, they and their bosses think that the Irwins, who have traveled across the globe in search of wild animals to photograph, are themselves secret spies. Thus, a comedy of errors ensues.

CROCODILE HUNTER: COLLISION COURSE is a schizophrenic movie. All of the shots featuring the Irwins are projected on a traditional, mostly rectangular screen, while the shots without them are shot in widescreen.

“I never wanted Steve to enter the movie world,” says director Stainton. “I always wanted him to stay within the smaller screen.”

“I wasn’t allowed to read the script, and I couldn’t go ‘round rehearsing my lines,” adds Steve.

In one sense, this means that viewers almost get two movies for the price of one, but it also makes for a little bit of a disconnect between the scenes with Steve and Terri and the scenes without them. This makes the movie a weird experience at times, but it doesn’t lessen all the fun. Some moviegoers, however, might want to sit closer to the screen than usual to get a better theatrical experience.

As usual, Steve Irwin is funny and a little bit crazy as the passionate wildlife expert. Some people may be turned off by that, but many will be amused and entertained. Not only that, but it also looks like he and Terri get much closer to the wild animals, including a snake, the crocodile, a spider, a lizard, and a baby kangaroo, than they ever have before on their television shows. Both Steve and Terri get to wrestle the crocodile who’s been causing so much trouble in the area. Their adventures make for one wild, fun ride!

Of course, the stories involving the spy satellite and the rancher and the ranger are not as compelling as the one with Steve, Terri and the animals. They have their own entertaining moments, however.

Younger children may get a bit too scared with the scenes involving the crocodile, snake and spider, but they will enjoy the baby kangaroo and perhaps even the chase with the lizard. Parents should also be cautious about the movie’s Romantic worldview, which includes the mild environmentalist message that comes with everything the Irwins do. Such a worldview can lead to a disregard for human life, and, at one point in the movie, Steve does indeed show a slight disregard for the people who are chasing him, though their own irresponsible, mean behavior has led to his attitude. At another point, Steve says, “I’d rather deal with this (poisonous) snake than a lot of people I know.”

In this light, it is interesting to note that, before the big press screening in Los Angeles, Steve Irwin told the audience that a recent family tragedy has made him realize, “The most important thing in the world is human life.” This was a wonderful, unexpected message. MOVIEGUIDE® prays the people who saw the screening will take it to heart.

Offsetting CROCODILE HUNTER’s Romantic, environmentalist worldview is the close relationship between Steve and Terri and the movie’s genial, family-friendly attitude. THE CROCODILE HUNTER is good family entertainment, with plenty of fascinating scenes showing animals living in the harsh Australian landscape. If parents have properly explained to their children the truth about the biblical worldview, the evangelical message of Jesus Christ and the dangers of putting animal lives above the lives of human beings, then they may want to allow their older children and teenagers see CROCODILE HUNTER: COLLISION COURSE.