THE GIANT OF THUNDER MOUNTAIN 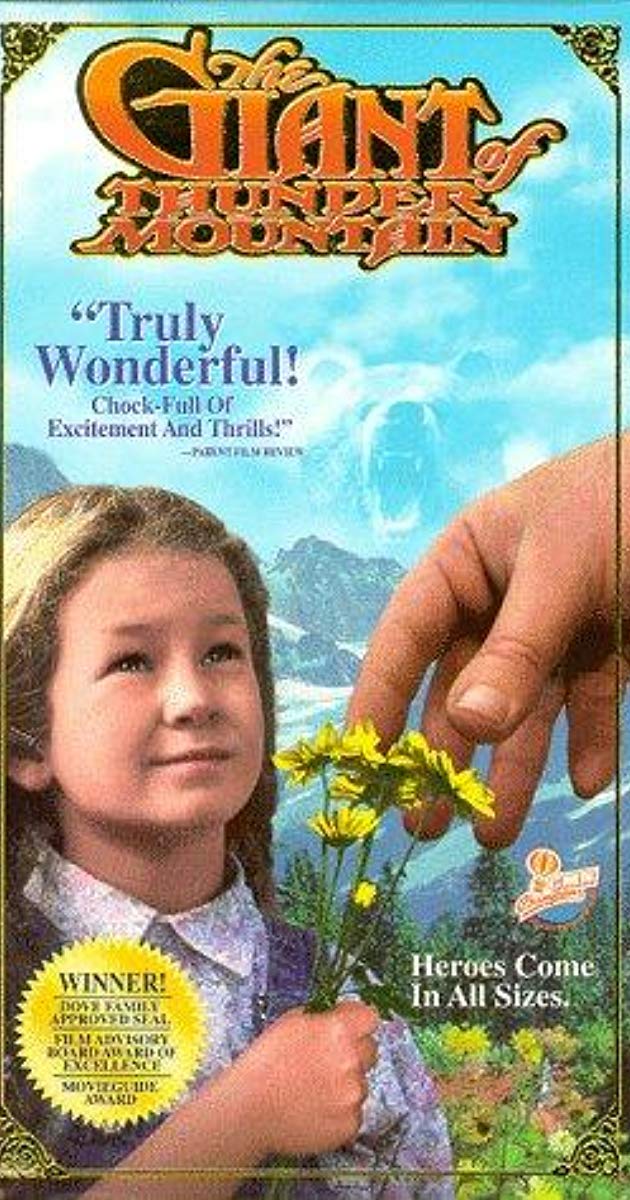 A little girl befriends a hulking and reclusive mountain fellow and is touched by the giant's love. For rip-roaring family entertainment, movies can't get much better than THE GIANT OF THUNDER MOUNTAIN.

Rip-roaring family entertainment and exquisite photography characterize THE GIANT OF THUNDER MOUNTAIN, the story of a little girl who befriends a hulking and reclusive mountain giant.

Set in the late 1800s during northern California’s post-gold rush era, a huge mountain man lives a hermit-like existence atop Thunder Mountain. Orphaned when a marauding grizzly bear killed his parents, Eli Weaver has shunned the townspeople for making fun of his hulking, brutish size and has remained in the mountains hoping to come across the bear that killed his parents.

In the town below, a group of boys tell stories about the evil giant of Thunder Mountain. For initiation, Ben and his older brother Tommy are told they must prove their bravery by finding the giant’s lair. Feigning fearlessness, the two climb the mountain, invade Eli the giant’s wilderness cabin and run off with one of his wood carvings.

The next day, feeling constrained, they set out to return the stolen item and are followed by their little sister, Amy. When Tommy and Ben lack the courage to approach Eli, Amy walks directly towards the giant. She finds Eli is warm and friendly, and he appreciates the return of his carving.

While Amy is making friends with Eli, Tommy and Ben discover in his cabin what appears to be a bag of gold nuggets. Intending to find out if they’re real, they take a few small ones. The youngsters depart, with Amy inviting Eli into town for a just-arrived carnival.

This particular traveling show has its downside, though, in Hezekiah Crow, a dishonest and conniving owner/operator, who manages to learn from Amy where she got her gold nugget. Eli later joins Amy at the carnival, but the townspeople ridicule him once more, so he retreats to his mountain cabin.

The children go up the next day to see him. Amy and Eli go off to view the huge sequoia trees just as Hezekiah and his brood come looking for Eli’s gold. They knock Tommy unconscious, put Ben in a gunnysack and search the cabin for the nugget gold stash.

Meanwhile, the children’s mother discovers them missing, learns they’ve been taken to the giant’s cabin and fears the worst. A vigilante posse, armed to the teeth, forms for a rescue mission. As this is happening, Amy and Eli find themselves in another part of the forest being stalked by the killer grizzly!

So the stage is set for the exciting and touching ending. What will happen to Eli and Amy when the vicious grizzly catches up with them? How will the vigilantes respond when they find Tommy unconscious and Amy missing? If Eli escapes the grizzly, will he escape the wrath of the mob?

Families will enjoy the movie. The music is excellent, the children are terrific actors, and the story tells an important message: we need to love our neighbor as ourselves. THE GIANT OF THUNDER MOUNTAIN is chockfull of other moral points well, including Eli’s teaching of the Bible to Amy, and the fact that we should not judge people by their physical appearance.

Richard Kiel, who plays the giant and is most identifiable to audiences as the villainous, steel-mouthed “Jaws” in two of the James Bond pictures, says humorously, “It was the first time I’ve ever been in a film in which another performer was bigger than me.” Kiel is 7′ 2″, weighs 320 lbs and fully fills size 17EEE shoes, but Bart the bear stands nearly 10 feet and weighs 2,000 pounds.

THE GIANT OF THUNDER MOUNTAIN is one of the few films which MOVIEGUIDE recommends wholeheartedly for the whole family.