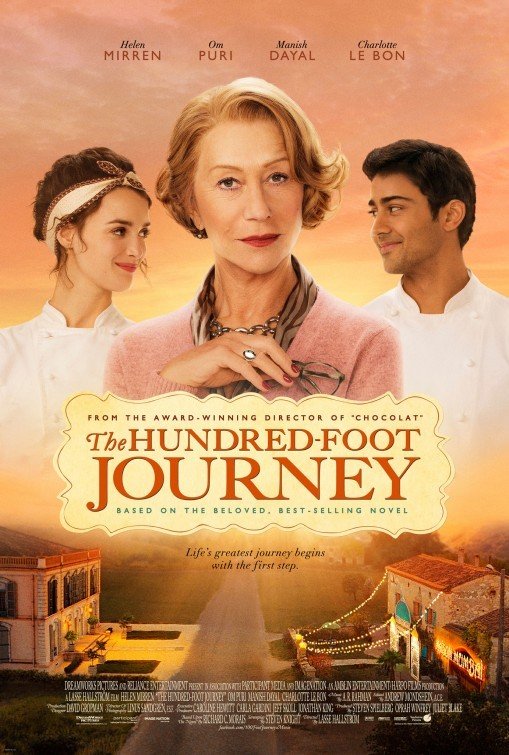 In THE HUNDRED-FOOT JOURNEY, the Kadam family must build up their new Indian restaurant in France while facing stiff competition. Young Hassan loves to learn cooking from his mother. During an attack, his family’s restaurant is burned to the ground and his mother dies in the fire. The family decides to go to France and restart their lives there. When Papa Kadam decides on a restaurant in a small village, the Kadam family must compete with a thriving restaurant well established. Meanwhile, the son has the desire to learn more than just Indian cuisine. Can he become a great chef?

(BB, CapCap, O, L, V, S, A, M) Strong moral pro-family worldview with strong capitalist elements, including characters say “bless you”, but an occult element where one character is said to speak to a dead person; three light profanities, two obscenities; large fire burns down building and family’s home, women is burned in fire; characters walk out of closet, with hair frazzled and clothing not buttoned up; no nudity; light drinking; no smoking or drug use; and, children talk back to father.

Young Hassan Haji Kadam loves to learn cooking from his mother. During an attack, his family’s restaurant is burned to the ground. Sadly, his mother was trapped in the fire and dies. Saddened, the family moves to London to start over. Years later they decide to move to France to start a restaurant.

After their car breaks down in a small French city, Hassan’s father, Papa Kadam, stumbles on a dilapidated restaurant building up for sale. Papa gets in his mind to buy the restaurant, even though his children show him there’s another, award winning restaurant literally steps away from the building. Kadam doesn’t let this fact stand in his way. He buys the building and the family starts to prepare it for their Indian cuisine.

As the Kadam family is preparing the new restaurant, the neighboring restaurant’s owner, Madame Mallory, tries to compete. The family is against great odds because Madame Mallory’s restaurant has a Michelin star, but Papa thinks his son Hassan has what it takes to be a great cook.

Hassan starts to talk with a female chef, Marguerite, from Madame Mallory’s restaurant. Hassan has only ever cooked Indian food, but Marguerite gives advice to Hassan about cooking certain French cuisine. He becomes excited about the possibilities of becoming a real chef.

When the Kadam family first opens their doors, the French start trickling into the restaurant. Eventually, with some persuasion, the restaurant is full. Though this is the case, Hassan Kadam still has the desire to learn more than just Indian cuisine. Can he become a great chef?

THE HUNDRED-FOOT JOURNEY is a pro family movie with some pro capitalist elements. The Kadam family works together to build a successful restaurant. Ultimately, their love for each other is what ties everything together. There are some times, though, that the characters talk back to their father. Though this is the cause, the children recognize their father builds the family and is the decision maker. There is one instance of implied fornication outside of marriage, but the scene is handled discretely. Also, the father talks to the dead mother, but this is more like a social convention showing how much they cared for one another.

THE HUNDRED-FOOT JOURNEY is an entertaining movie. The movie is based on a book, so the writers may have veered from their premise at times to add extra story lines. The movie could have ended at several points. Though this is the case, the movie is entertaining throughout and has a great heart to it. The use of real film gives the movie a wonderful visual quality, with vibrant colors. Helen Miren does a wonderful acting job playing Madame Mallory, as does Om Puri as the Indian father. Some of the other actors, however, are clearly less experienced.