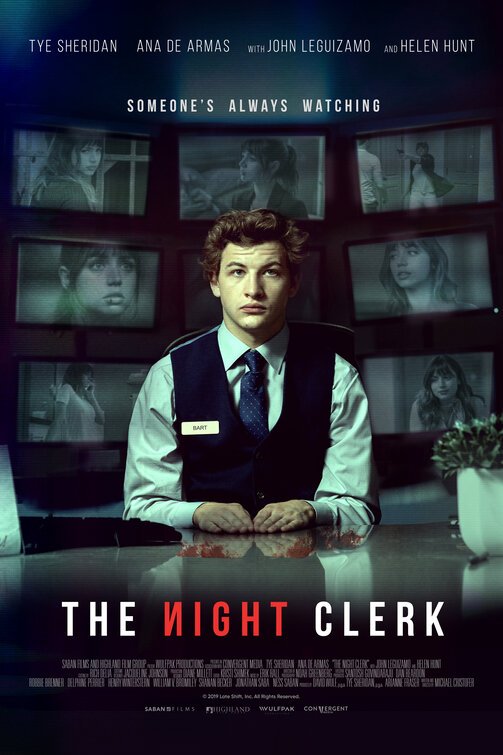 THE NIGHT CLERK begins as Bart Bromley reports to his nightly shift at a hotel where he’s worked for a couple years. Afflicted with Asperger’s Syndrome, Bart learns to interact and communicate with people by watching them. He has placed cameras in convenient places around his home and in different rooms at the hotel, so he can watch and mimic the people he sees. However, one night right after he gets off work, he sees on his cameras that a woman is getting severely beaten, and he rushes to her rescue. However, when his coworker hears a gunshot and rushes into the room, he finds Bart sitting over a woman’s dead body.

THE NIGHT CLERK is primarily carried by the performances of Tye Sheridan and Ana de Armas as Bart and Bart’s love interest. Though generally entertaining, the movie is a bit slow in places and lacks the major action that might be expected in a thriller like this. THE NIGHT CLERK also has a strong Romantic worldview with lots of foul language, some lewd content and brief nudity. So, MOVIEGUIDE® advises extreme caution.

(RoRo, LLL, VV, S, NN, AA, D, M):
Dominant Worldview and Other Worldview Content/Elements:
Strong Romantic worldview as the driving motivation is in pursuit of a romantic relationship and getting the truth to the person of interest of the protagonist
Foul Language:
About 36 obscenities (including 13 or so “f” words), one GD, and 11 light profanities
Violence:
Moderate amount of violence throughout including being rough with and hitting two different women, a woman is shown after being shot with some blood, and a man murders his wife after she learns of his unfaithfulness
Sex:
Implied fornication, a man is known to be cheating on his wife, and a police investigator asks some sexual questions
Nudity:
Upper female nudity shown briefly as a woman comes out of a pool while swimming nude and is surprised by someone, immediately covering herself, upper male nudity in implied sexual situations, and a woman is shown wearing bra and underwear
Alcohol Use:
Some alcohol use throughout including wine and other alcoholic beverages and one example of drunkenness when a young woman admits to drinking too much
Smoking and/or Drug Use and Abuse:
Smoking on a few occasions, but no drugs; and,
Miscellaneous Immorality:
Lead male character with Asperger’s Syndrome spies on people in hotel where he works so he can practice how to interact with people, and a brief instance of stealing as a tape is stolen in order to avoid being convicted of a crime.

THE NIGHT CLERK begins as Bart Bromley gears up for another night shift at the hotel that he has worked at for a few years now. He has an elaborate system set up in his living space, with many TVs that show footage from different places. He is watching what seems to be security footage, except it’s his own personal collection. He sees his mother cooking dinner in the kitchen and watches her every move. He watches footage from people who have stayed in rooms at the hotel and sees the way they interact with each other from inside of the hotel room, mimicking their words and voice inflections. Bart has Asperger’s Syndrome and refers to himself as an “Aspie.” He is fully aware of his nuances and the reasons why he is the way he is. He has learned to live his life by watching others and copying what they say and do. He can comment on the weather and give little anecdotes that he has heard before.

One night, a pretty woman checks into a room, and he gives her one that he knows he can watch. He sees her in the room and is watching her movements when his coworkers suddenly surprises him. Jack arrived 15 minutes early and Bart was not expecting him so soon. Jack has seen a glimpse of what Bart was watching and notes that it looks like one of their hotel rooms. Bart slams his laptop shut and leaves to go home immediately. He stops at a small store on the way home, buying a few pints of ice cream before settling in for the night. He has his TVs all set up to see every angle of the hotel room, and he begins practicing as usual. However, a man has entered into this woman’s room and things don’t seem to be going very well. He begins hitting her. and as he throws her around, a small gun falls out of her purse.

Bart begins to panic, and rushes back to the hotel as quickly as possible. Not long after he rushes through the side door, his coworker, Jack, hears a loud bang. Opening the door to the occupied room, Jack finds Bart sitting on the bed over a woman’s dead body. Bart tells him that he believes this person is dead, and after Jack leaves, Bart rushes around grabbing the memory cards from all of the hidden cameras in the room.

The police and private investigators have surrounded the hotel and are beginning to ask questions. Bart quickly tells the officer that he forgot his wallet, and that’s why he came back to work. However, he already has a hole in his story. The detective points out that if he forgot his wallet, he couldn’t have bought ice cream, like he said he did. Bart’s boss moves him to a different hotel location while they get everything sorted out, but Bart still sees the detective following him.

At Bart’s new location, a young woman named Andrea has checked in for an indefinite amount of time, and Bart has quickly become mildly obsessed with her. He thinks she’s the most beautiful thing he’s ever seen, but as he watches her, he sees that she’s involved with someone else. As he looks closer, he sees the man has a familiar tattoo. When he goes back to his footage of the night of the murder, he notices the exact same tattoo on the man who was beating the dead woman that night.

Bart tries to convince Andrea that this guy is bad news, but she is hooked on him, even though she knows he’s married. Bart wants to find a way to win Andrea’s heart, convince her of the truth, and still not reveal to the authorities how he got the information about her married lover, because it could lead Bart into some serious trouble.

Tye Sheridan as Bart and Ana de Armas as Andrea mainly carry THE NIGHT CLERK. Their performances are the most compelling thing in the movie. Otherwise, this movie won’t satisfy viewers looking for a thrilling murder mystery. Nothing too momentous occurs, and the movie sometimes feels too slow. It is overall entertaining, however, as long as viewers go into it without demanding too much from it. The story is mostly Romantic. The driving motivation is winning the affections of an attractive young woman. THE NIGHT CLERK also contains some sexual situations and lewd dialogue, brief nudity and an excessive number of obscenities. So, MOVIEGUIDE® advises extreme caution.