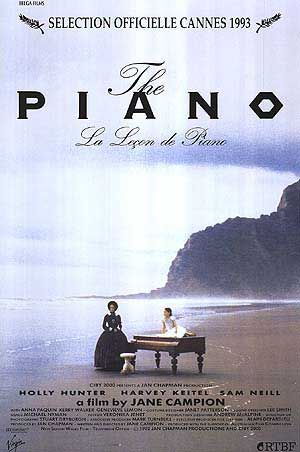 THE PIANO, directed by Jane Campion, tells the story of a mute widow whose father arranges a marriage to a man in New Zealand. Because of his increasing cruelty, their marriage is never consummated. This is a visually breath-taking movie that incorporates the theme of forgiveness. However, its case for infidelity, even under the adverse circumstances, contradicts God's word.

THE PIANO, an epic-type of film, focuses on a Scottish woman nnamed Ada (Holly Hunter), who has been mute since the father of her daughter was killed. Her only communication with the world is through her piano. Playing her piano gives her a “voice” with which to express herself. The film commences in Scotland when she learns that her father has married her to Stewart, a man in New Zealand (Sam Neill). She and her six-year-old daughter are sent by boat for the difficult voyage. When they meet, he wants to leave the piano behind because it is too heavy. The couple never consummate their marriage, and Ada’s relationship with her husband escalates to cruelty. However, a love relationship develops between Ada and a kind neighbor who barters the piano for land from Ada’s husband and for piano lessons.

Although THE PIANO does incorporate the theme of forgiveness, its case for infidelity, even under the circumstances of cruelty and a never-consumated marriage, clearly contradicts God’s word. Even so, it is a visually breathtaking movie, filmed sensitively in the New Zealand wilderness. Jane Campion’s direction is excellent, and each performance, particularly Holly Hunter’s is flawless. At Cannes, the film was awarded the Palme D’or prize for best film, and Hunter received the Best Actress award.