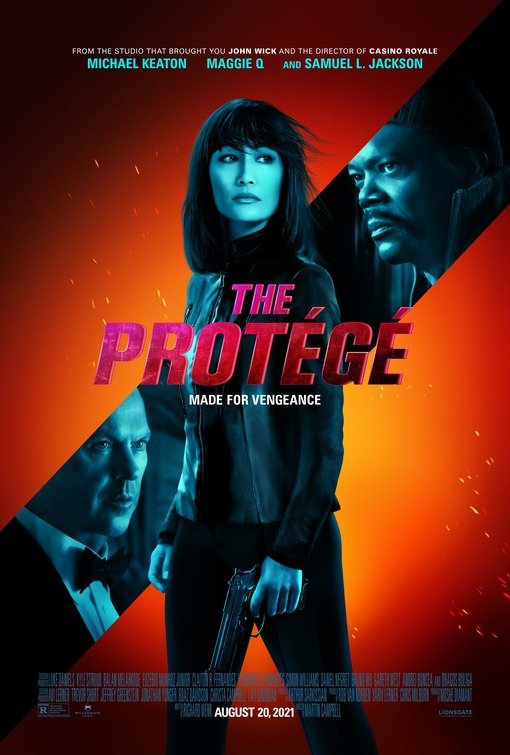 THE PROTÉGÉ follows the adventures of a female assassin who must confront her past in order to avenge the murder of her mentor. Orphaned at an early age in Vietnam 30 years ago, Anna is a trained assassin who lives with her mentor, Moody, who’s a father figure to her. Moody wants to return to Vietnam to search for a boy missing for 30 years, but Anna doesn’t want to return to her native land. Before Moody can leave, however, Anna finds him murdered in the bathtub. She decides she must return to figure out who killed Moody and avenge his death.

THE PROTÉGÉ has an impressive lead trio of actors and some snappy dialogue. Its action is impressive and fun in the beginning, but the plot eventually becomes too convoluted, murky and bloody for its own good. Also, the ending is unsatisfying and open ended, setting viewers up for a sequel. THE PROTÉGÉ has lots of foul language, a casual attitude toward sex and frequent bloody depictions of violence. The average moviegoer probably would find THE PROTÉGÉ not worth their time.

(PaPaPa, B, C, LLL, VVV, S, NN, A, MM):
Dominant Worldview and Other Worldview Content/Elements:
Very strong, slightly mixed pagan worldview with some lightly positive moral and Christian elements where the lead character is a hitwoman seeking to find out who killed her mentor and solve a crime, but everyone here is ruthless and a killer, and an implied sex scene is super-casual sex, but a few lines of dialogue make it clear that the heroes believe in an afterlife, with a male hitman talking about the souls of those he killed facing him in the afterlife “when I go up,” and the heroine teasing him, saying, “You think you’re going up?,” and Catholic nuns are portrayed nicely in a quick scene where the movie shows them caring for deeply sick and mentally ill people, and it’s noted that they help people without cost
Foul Language:
More than 20 uses of “f” words and 10 uses of “s” words
Violence:
Numerous brutal hand-to-hand combat fights that include stabbings and slicings with knives that are extremely bloody, several shootouts that destroy lots of property and kill dozens of people, a young girl witnesses her mother being killed with a sword and then shot point blank although the camera cuts away each time at the exact moment of violence, the girl then kills her mother’s attackers, and it’s implied that she’s trained throughout childhood to be an assassin, various bad guys are choked, hung or have their skulls crushed by blunt objects, one man has his head impaled on a sharp spike, heroine is waterboarded in a long scene and then later waterboards and drowns her attacker, and heroine electrocutes bad guys who walk into a wet floor
Sex:
The heroine and her main antagonist have a huge fight that turns into sexual foreplay as she wraps her legs around him, and they slam into walls, the man finally says you have to kill me or sleep with me, and they are next shown in bed after having fornicated
Nudity:
Upper female nudity when two women are briefly forced to jump out of a bed where they’ve been sleeping naked, a man is seen shirtless while swimming, and it is implied that the heroine is naked under her sheets, her bare shoulders showing while the man next to her is shirtless
Alcohol Use:
A couple of scenes feature casual social drinking
Smoking and/or Drug Use and Abuse:
No smoking or drugs; and,
Miscellaneous Immorality:
Characters are duplicitous and backstab each other throughout the movie.

THE PROTÉGÉ follows the adventures of a female assassin who must confront her past in order to avenge the murder of her mentor. THE PROTÉGÉ has some impressive action sequences and better-than-average acting and dialogue for a B-movie thriller, but ultimately it devolves into too much bloody mayhem and murky plotting, resulting in an unsatisfying ending.

The movie opens in 1991 in Vietnam and shows an assassin named Moody (Samuel L. Jackson) who finds a young girl with blood streaked on her face and holding a gun in her hands. Eventually, viewers see in other flashbacks that she grabbed the gun after watching a group of evil men kill her mother before her eyes. Moody takes her under his wing to a new life in London. Cut to her as an adult (Maggie Q) getting involved in the kidnapping of a crime boss’ son, which is really a ruse to get to the boss and kill him ruthlessly for a paid assignment.

Anna lives with Moody in a spacious home and maintains a cover image working in a rare bookstore. When Moody gets a tip that a missing boy named Lucas Hayes for whom he’s been searching for 30 years is alive as a grown man in Vietnam, he asks her to join him on his quest to find him. However, Anna swears she’ll never go back to her native land.

Before he can leave, however, Moody’s home is invaded, and Anna finds him dead in the bathtub. As she searches his computer to find out more of what he was doing in Vietnam, she decides she must return to Vietnam to figure out who killed him and avenge his death. Meanwhile, a man named Michael Rembrandt (Michael Keaton) has mysterious intentions of his own. He and Anna wind up in a cat-and-mouse relationship as they alternate between wanting to kill each other and make love together.

THE PROTÉGÉ has an impressive lead trio of actors and some snappy dialogue. Its action is impressive and fun to watch in the beginning, but eventually the plot becomes too convoluted for its own good. As a result, it’s easy to get lost among all the twists of who wants to kill whom and why. As the plot gets murkier, the violence gets more extreme to the point of being highly unpleasant.

The movie’s ending has a ridiculous plot twist about Anna’s mentor. Hat is followed by a confrontation between Anna and her lover that cuts away at the climax to leave viewers wondering just what happened; all in the service of setting up a sequel that’s highly unlikely to ever be made.

THE PROTÉGÉ has lots of foul language, a casual attitude toward sex and frequent bloodbath depictions of violence. Thus, THE PROTÉGÉ is clearly only appropriate for adults, with extreme caution. However, viewers of any age probably will want to spend their precious two hours watching something better.