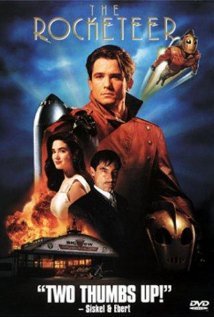 Strapping a flame-spewing, wing-tipped metallic gizmo to his back, ROCKETEER takes off flying when envious goons and Nazi's attempt to steal his futuristic equipment with a secret plan to rule the world. This well-crafted adventure film's only detraction is considerable violence, which makes it off limits for pre-teen audiences and offensive to some adults.

Strapping a flame-spewing, wing-tipped, metallic gizmo to his back, the ROCKETEER takes off flying when envious goons and Nazis attempt to steal his futuristic equipment with a secret plan to rule the world.

It all begins in 1938, when Cliff Seacord, a daring stunt pilot, and “Peevy,” his inventive mentor, find an experimental rocket pack and test-run it on a wooden mannequin late at night. Using its ultra-modern remote control (oddly mysterious to them before the age of television), the mannequin zooms into the starry sky and returns with its head burnt off. Peevy decides to take it back to his workshop, hoping that someday the rocket will be worn by man.

Meanwhile, gangsters as well as Feds search for “the package” which contains the rocket. Cliff goes to the local Cafe with his actress-girlfriend, Jenny Blake. Between his burger and her soup, Jenny tells Cliff about being cast for a minor role in “The Laughing Bandit.”

Cliff, however, has other things on his mind. When Jenny prods him about not listening, a few locals congratulate Cliff on “making the (stunt flying) Nationals” and the sparks he is making just preparing for it. (Actually, they caught glimpses of the test-run). Jenny storms off, insisting that “they know more about your personal life than I do!”

Later, on the set of “The Laughing Bandit,” Cliff shows up hoping to talk to Jenny. He accidentally knocks down a prop wall on top of Neville Sinclair, the lead actor in the production and one of the gangsters looking for the rocket. Consequently, Neville overhears Cliff talking about the rocket, and decides to serenade Jenny to get it. Neville, who previously hired gangsters to steal the rocket, asks Jenny to dinner at a posh restaurant.

At Cliff’s airfield, a clown’s flying plane takes a nose dive, and it is ROCKETEER to the rescue! “It’s not ready yet; we haven’t tested it on man,” warns Peevy. “There’s no time for that!” replies Cliff, donning the rocket and a copper wedge-tapered Gladiator helmet that Peevy created.

With people in the airfield stands watching, the ROCKETEER soars through billowy clouds to swoop the clown out of his seat just seconds before his plane crashes and explodes. As a result, the “unknown hero” is named ROCKETEER by the press, making him an overnight sensation. Unfortunately, Cliff also becomes hunted by the Feds and Neville’s Mafia goons, both of whom want the rocket.

ROCKETEER is a beautifully made film, with endearing characters, colorful scenery and awesome special effects. The cinematography and sensitive portrayal of Cliff Seacord is unique in that it enables the viewer to experience much of the wonder, excitement, fear, and suspense that he does. Watching the rocketeer fly, we become children again, actually soaring with him and feeling the wind brush against our clothes and tingle our skin.

Actually, watching ROCKETEER quickly becomes a vicarious experience. For a few hours, we are absorbed into a make-believe microcosm that allows us to escape our present circumstances. Also intriguing are the clever transitions from one scene to another. For example, we see the golden explosion of barn fading to a tranquil image of a shiny, gold tone trumpet playing a jazzy tune. In another scene, a cloudy pearl sky mistily fades to an attractive woman in a white dress awakening upon ivory satin sheets.

Based on the comic book series by the same name, ROCKETEER is also humorous in that many characters personalities reflect their names. (e.g., “Peevy” acts peevish and “Neville” is nebulous) Also funny is “Valentine,” a Mafia goon who has a change of heart about his criminal activities: “I may be a two-bit thug but I’m (also) 100% American and won’t work for a two-bit Nazi!”

ROCKETEER’s only detraction is considerable graphic violence, which makes this film off-limits for pre-teen audiences and offensive to some adults. It is noteworthy, however, that ROCKETEER contains very few obscenities and no nudity.

Rent or Buy THE ROCKETEER: