"How NOT To Win Friends While Influencing People" 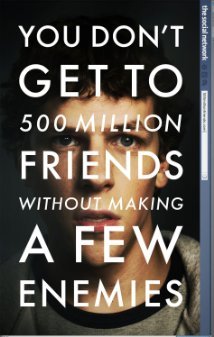 THE SOCIAL NETWORK is an absorbing, sometimes funny, drama about Mark Zuckerberg and Eduardo Saverin. They are the two young guys from Harvard who started Facebook, the social networking website that is reportedly now worth about $25 billion. Mark is a computer programmer whose idea for Facebook is funded by Eduardo, for 30% of the company. The problem is, Mark stole some of his idea from two other Harvard students, who are now considering suing him. Then, Mark gets involved business-wise with another clever, but sleazy, young Internet guru. This drives a wedge between Mark and his best friend, Eduardo. It also leads to another lawsuit.

THE SOCIAL NETWORK is a fascinating, impressive, behind-the-scenes look at one of the biggest phenomenons on the Internet. The acting is superb, and the direction is brilliant. Thematically, the movie delivers a penetrating, stimulating morality tale, without coming across as an anti-capitalist diatribe. However, the Facebook owner disputes some of the movie’s negative portrayal. Also, THE SOCIAL NETWORK contains suggestive scenes, brief homosexual and drug references, and plenty of strong foul language. Thus, extreme caution is warranted. Go to movieguide.org for the full review.

(B, CapCap, RH, Pa, Ho, LLL, V, S, N, AA, DD, MM) Light morality tale with pro-capitalist content, though one of the movie’s messages is against mistreating one’s business partners and friends, which happens a lot in this business story, plus some history may have been revised and some hedonistic pagan behavior show, including brief homosexual content when two female coeds are shown kissing at a wild college party; about 37 obscenities (including up to three “f” words), six strong profanities, four light profanities, and an obscene gesture; some sexual comments, implied fornication in one scene, suggestive dancing between two girls in underwear and one guy and two girls in underwear at college party, college students shown playing strip poker at college party with one female co-ed in bra, and two unknown female coeds shown kissing during a college party; no graphic salacious nudity but some upper male nudity and female coeds in underwear while playing strip poker and suggestively dancing; alcohol use and drunkenness in a college party atmosphere, plus drinking in nightclub; girl smokes marijuana bong and people snort cocaine off girl’s bare stomach (she’s in a bra); and, stealing intellectual property, treating close friend badly, deceit, envy, and revenge ends in a couple lawsuits, plus story told where a man was accused of “animal cannibalism” by animal rights activists when he unthinkingly feeds a live chicken some chicken meat.

THE SOCIAL NETWORK is one of those movies that does live up to some of its hype. It is definitely one of the best movies of the year, with some thought-provoking themes that capture the spirit of our age. That said, it also has some gratuitous lewd content, brief drug references and plenty of gratuitous foul language. It also contains controversial depictions of historical events.

Basically, the movie is about Mark Zuckerberg and Eduardo Saverin, the two young guys from Harvard who started Facebook, the social networking site on the Internet that is reportedly now worth about $25 billion. That’s billion with a “b.”

Told partly in flashback, the movie opens with an argument in 2003. Mark Zuckerberg is arguing with his girlfriend, Erica, about the social cliques at Harvard. Mark obviously wants to find a way into the upper crust there, but Erica is not as concerned about it. At one point during the argument, Mark personally insults Erica. He awkwardly tries to apologize but just makes things worse. Erica storms off, effectively calling Mark a jerk, but in an obscene way.

Now angry at Erica, Mark storms back to his dorm room. With help from his close friend, Eduardo Saverin, Mark takes all the photos of the coeds on campus and sets up a website where the guys on campus can judge which of two females is the “hottest.” Many of the students are partying because it’s Friday night, so the website, which Mark deems “Facemash,” becomes so popular that it completely shuts down Harvard’s computer system within four hours.

Two members of Harvard’s elite rowing team, Cameron and Tyler Winklevoss, are impressed by Mark’s Internet prank. They approach Mark with an idea for a social networking website for all the students at Harvard. They need Mark’s frenetic genius as a computer programmer to create the final code for the website, which they want to call Harvard Connect. Mark agrees, but, behind their back, he and Eduardo create their own website, which they call TheFacebook. Eduardo doesn’t know, however, that Mark stole the idea, but he provides the seed money for it, for a 30% interest in the company.

As the new website spreads like wildfire to other campuses in the U.S. and England, Mark and Eduardo start developing the website into a social networking site for everyone. Into the mix steps Sean Parker, the allegedly sleazy founder of Napster, who has some ideas of his own about how to market Facebook. This drives a wedge between Mark and Eduardo, however, that eventually leads to a lawsuit. Meanwhile, the Winklevoss brothers also finally decide to sue Mark for stealing their idea.

THE SOCIAL NETWORK is a fascinating, impressive behind-the-scenes look at one of the biggest phenomenon on the Internet in the past 10 years. The acting is superb, and the direction is brilliant.

Thematically, the movie delivers a penetrating, stimulating morality tale, without coming across as an anti-capitalist diatribe. However, the real Facebook guru disputes some of the events and conflicts in the movie, but his partner and former friend did reportedly reach a settlement with Zuckerberg and signed an agreement of silence for it. In the end, the movie shows that people who don’t treat their friends and business partners correctly may wind up with no friends at all.

Regrettably, the movie’s first scenes open with some shots of Harvard students partying. Those scenes include students drinking, playing strip poker, suggestive dancing, female students in their underwear, and a tracking shot of a party showing two female coeds kissing. Also, the protagonist’s new friend, Sean Parker, seems to have a similar hedonistic attitude. Scenes with him later in the movie include smoking marijuana and snorting cocaine. The movie itself is noncommittal about those scenes, but it does show that Sean Parker turns out to be a worse villain than the protagonist, though some of Sean’s business suggestions are sound. Finally, there is lots of strong foul language throughout THE SOCIAL NETWORK, including a couple “f” words and several strong profanities.

All in all, therefore, despite the movie’s accomplishments as an incisive morality tale, THE SOCIAL NETWORK warrants extreme caution. In fact, despite the movie’s overall positive message, some viewers may find its party scenes too inviting. After all, the protagonist’s company is indeed now worth $25 billion. With that kind of money, maybe Facebook’s Mark Zuckerberg doesn’t need any real friends, even though his company is built on the concept of making friends.

Of course, that’s the main irony of this award-worthy piece. And, in the last scene, the protagonist seems to be pondering whether what he’s done to his friends, including the girl he left behind, has been worth it. Don’t cry too much for Zuckerberg’s friend, Eduardo, however, because he still reportedly owns more than 6% of that $25 billion company.