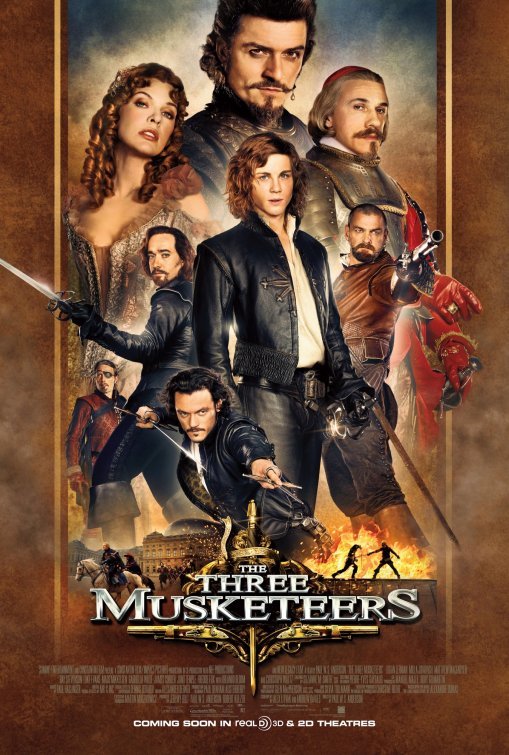 In the new THREE MUSKETEERS movie, the leader of the three musketeers, Athos, is betrayed by the Lady De Winter. In cahoots with the Duke of Buckingham, she steals Leonardo DaVinci’s plans for a military airship away from Athos. Cut to young D’Artagnan traveling to Paris to join the king’s musketeers, like his father before him. He meets a dejected Athos, Porthos, and Aramis. Eventually, they uncover a plot by Cardinal Richelieu and Lady De Winter to embarrass the strong-willed Queen of France and eliminate her. D’Artagnan and his new friends go on a big adventure to stop them.

THE THREE MUSKETEERS is more like a comic book adventure. However, the acting and some exciting, if sometimes unbelievable, action scenes save the day. The sword fighting is fun, and so are most of the characters. There’s little reason to see the 3D version, but THE THREE MUSKETEERS still celebrates the heroics and morality of the original story. Though the Christian Cardinal is a bad guy, the good musketeer Aramis honors Christianity several times. THE THREE MUSKETEERS has some foul language and brief innuendo, so caution’s advised for older children.

(BB, PP, C, Ab, LL, VV, S, A, M) Strong moral, patriotic worldview, with one of the three heroic, good-guy musketeers honoring his Christian faith two or three times, but a power hungry Cardinal is one of the bad guys and a carving on one of the other villains’ airship is of a menacing skeleton carrying a crucifix of Jesus Christ in one of its bony hands, so there could be some theological confusion; 14 obscenities and two light exclamatory profanities; lots of action violence includes many sword fights with people being stabbed, canon balls rip apart ships and building, people fire old guns and muskets at one another, people fall from great heights, people kick and punch one another during swordfights, etc.; no sex scenes but man makes a comment with light sexual innuendo and villains concoct false story of an illicit love affair with the young Queen of France; no nudity but woman strips down to her old fashioned corset to sneak around the French palace and other dresses worn by women reveal some cleavage; alcohol use and celebration favoring wine drinking; no smoking or drugs, though female villain drops a sleeping or knockout potion into the drinks of the three musketeers; and, deceit, betrayal, lying, manipulation but they are mostly rebuked.

Summit Entertainment didn’t provide an advanced screening for the new THREE MUSKETEERS movie, which is being released in a 3D version. Although the 3D visuals are just okay, the movie turns out to be an unexpectedly entertaining piece of eye candy, despite some over-the-top action.

THE THREE MUSKETEERS converts the beloved story into a comic book action adventure with a few modern-day jumps and other acrobatics familiar to fans of martial arts thrillers and movies like THE MATRIX. The movie also opens with the theft of Leonardo DaVinci’s plans for a military airship, called a war machine in the movie. The characters actually end up building two of these fanciful airships.

Athos, Porthos, and Aramis, the three musketeers, steal the plans from a fancy locked vault in Venice. They are betrayed, however, by the Lady De Winter, who was made a better offer by England’s Duke of Buckingham. Athos is particularly upset by this betrayal, because he loved her, and he thought she loved him.

Cut to young D’Artagnan making his way to Paris to join the king’s musketeers, like his father before him. He meets up with a dejected Athos, Porthos, and Aramis, who’ve been stripped of their military profession because of their failure in Venice. After an encounter with the devious Cardinal Richelieu’s men, D’Artagnan and the three musketeers are rewarded by the young king, Louis XIII, who’s influenced by his queen, Anne. This upsets Richelieu, because he wanted them punished.

To get rid of the queen, Richelieu hatches a plot with Lady De Winter to invent a love affair between Queen Anne and the Duke of Buckingham. D’Artagnan and his new buddies get wind of the plot and are asked to stop it. They have to go to England to retrieve one of the queen’s fancy necklaces that Lady De Winter stole and secretly placed in Buckingham’s vault without his knowledge. However, Richelieu sends Lady De Winter and his right-hand man, Rochefort, after them to make sure they don’t succeed.

The acting and some spectacular and exciting, if sometimes unbelievable, action scenes save THE THREE MUSKETEERS from being a misfire. The sword fighting is fun, and so are most of the characters. There’s little reason, however, to see the 3D version.

That said, THE THREE MUSKETEERS is like a comic book adaptation of the classic story by Alexander Dumas. Literary purists may be upset, but there’s no denying the power of these familiar characters, especially as played by this spirited cast. Matthew Macfadyen is particularly good as the brooding Athos. Tasteful viewers will want to see this actor with the magnetically powerful deep voice in more action movies. Also, Milla Jovovich plays the villainous Lady De Winter with complete relish, though some of her derring-do is clearly over the top. Logan Lerman makes a good, if not great, D’Artagnan. And, Christoph Waltz as the devious Cardinal Richelieu, and Luke Evans and Ray Stevenson as the other two musketeers, round out the main cast in fine fashion.

THE THREE MUSKETEERS still celebrates the heroics and morality of the original story. Though the Christian Cardinal is one of the bad guys, the good musketeer Aramis honors Christianity several times in the movie. However, the front of the Duke of Buckingham’s airship has a large carving of a menacing skeleton carrying a Catholic crucifix of Jesus in its bony hand. This could result in some theological confusion. THE THREE MUSKETEERS also has some foul language and brief innuendo. Thus, MOVIEGUIDE® recommends caution for older children.

Of course, like the 1973 version featuring Charlton Heston, Faye Dunaway, and Michael York (which was actually supposed to be a three and one-half hour movie), the new THREE MUSKETEERS only tells the first half of the famous story. Thus, there’s a last scene in the new movie that leaves plenty of room open for a rousing sequel.