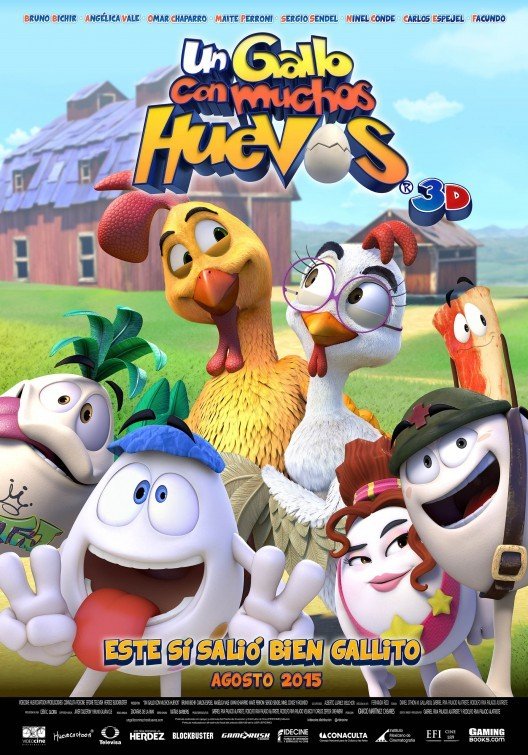 UN GALLO CON MUCHOS HUEVOS is an animated Mexican movie. A small Mexican farm has gone bankrupt. The animals are about to lose the only home they’ve known. They decide to bet the farm on a cockfight to save it. Toto, a young, timid rooster, volunteers to challenge the undefeated champion. He has no training and is too scrawny to be taken seriously. With help from his friends, however, Toto gets into shape. Despite the odds, Toto must learn to face his fears and become the hero to save the farm.

Although it’s no Pixar, this movie has its cute, clever, positive moments. It pays homage to well-known movies such as ROCKY, THE KARATE KID and THE GODFATHER. Much of the humor is rooted in Mexican culture and might be strange to Non-Mexicans. A major problem is that the plot revolves around the illegal sport of cockfighting. It also endorses betting and gambling. For an animated movie aimed at children, UN GALLO CON MUCHOS HUEVOS has a fair amount of sexual references, risqué content and cartoon violence. So, caution is advised.

(PaPa, FR, B, C, Ho, VV, S, A, MM) Strong mixed pagan worldview with some false religion, moral and redemptive elements such as a promotion of cockfighting and gambling to save a family farm, a very brief line about praying to a confetti god, a brief line about chickens possibly going to Heaven or “wherever chickens go,” a willingness to sacrifice in order help others in need, an egg jokes about a chicken being demon possessed and tries to get rid of the demon, and a homosexual egg character makes a brief appearance; no foul language; strong cartoon violence includes multiple scenes showing roosters in a cockfighting ring boxing and kicking each other, some roosters are beaten to unconsciousness during a cockfight, a bird slaps a rooster in the face, a bird randomly explodes in the air, vultures attack the farm and try to kidnap hens, a woman in a fictitious story appears to be demon possessed and tries to fry eggs who are alive, a rooster and a duck fight, it’s implied a duck was killed and eaten by a crocodile, a man shoots a gun into the air and tries to threaten a group of people with it after his rooster loses a cockfight; some sexual references or innuendo such as an egg points out to a rooster that a hen wants to “go all the way” with him, many double-entendres are made regarding sex or male private parts, a chicken M.C. asks his audience if they’re ready to see some chicken breasts before a sexy hen comes out to perform, a woman in a bikini is animated to show off her big breasts, another woman is animated to draw attention to her breasts, eggs sloppily kiss using their tongues; no explicit nudity, but female cleavage when woman appears in a bikini and another woman is dressed provocatively; a drunk chicken harasses another group of chickens in a nightclub; no smoking or drugs; and, chickens steal a motorcycle, animal cruelty and gambling are endorsed through the use of cockfighting, a owner loses his hens in a bet when his rooster loses a cockfight, and an entire farm is bet in a cockfight.

UN GALLO CON MUCHOS HUEVOS is an animated Mexican movie about a young rooster who challenges an undefeated champion in a cockfight to save the family farm where he and his friends have lived all their lives. Though it has some cute moments and positive elements, this movie contains some inappropriate content and messages for children, so caution is advised.

A small Mexican farm is home to a grandmother, her grandson, a bunch of hen eggs, and a slew of animals who have spent their entire lives living there. Confi, an overly zealous egg, tells the little eggs a story of the Avenger Rooster who once saved him from being fried. The “children” are in awe of his tall tale and wish to meet this hero. Enter Toto, a young and scrawny rooster, who is humorously identified as the fictitious savior. Although Toto plays along, he knows he’s far from being the tough and brave rooster that Confi made him out to be.

Despite his size and timidity, Toto dreams about what it’s like to be a champion boxer. Every week, the grandson on the farm listens to a radio broadcast of the big cockfight to see if anyone can beat Bankivoide, the undefeated champion rooster. Unable to even properly crow yet, Toto knows he’s not made for such dreams.

One day, word comes to the animals that the farm has gone bankrupt, and they’re in danger of losing their home if enough money isn’t raised to pay off the debts. They quickly devise a plan to help the grandmother. One of the other roosters had been a champion boxer in his younger days, and he decides to bet the farm in a cockfight.

When they go to see the Godfather-like bookie, who will arrange the bet, he only agrees to do so if Toto fights Bankivoide. With no other option, Toto reluctantly agrees. Immediately, he begins training with the help of his friends. They all learn that years ago a duck disguised as a chicken beat the once-upon-a-time champion. So, they set out to find a duck to teach Toto some uncharacteristic moves that would throw off any rooster.

Toto bumbles his way through learning how to swim and fly, which would allow him to outmaneuver Bankivoide in the ring. However, when the day of the fight comes, Toto’s fears get the best of him, and he chickens out. With his home and friends on the line, he must summon the courage to become the heroic Avenger Rooster, this time for real.

UN GALLO CON MUCHOS HUEVOS is the first widely released Mexican animated movie in the U.S. It’s actually a sequel to two previous 2D animated films featuring the same characters. This time they have been brought to life in 3D, although there is a clever use of 2D animation during nightmare sequences to distinguish between what it is imagination, and what is reality. The movie makes heavy use of homages to other pop-culture hits such as ROCKY, THE GODFATHER and KARATE KID, as well as musicians like Snoop Dog and L.L. Cool J. Most of these references go over the heads of children, but adults would be more appreciative of them. Some of the subtitles go by so fast that it’s nearly impossible for an adult to read them quickly enough, never mind a child. Also, much of the humor is rooted in Mexican culture, which doesn’t always translate to other audiences the way it’s intended. That said, the story stresses some positive moral, redemptive values such as courage and sacrifice.

The most obvious issue with UN GALLO CON MUCHOS HUEVOS is that the plot is centered on the illegal sport of cockfighting. While it’s still legal in Mexico and an integral part of their culture, it is eyebrow-raising in the U.S. for a children’s movie to be about what is considered animal cruelty. Because it’s an animated children’s movie, the cockfighting is mild by comparison to the realities of it. Here, it resembles more of a kickboxing match with the contenders wearing boxing gloves. There’s no blood or any fights to the death, but a few roosters do get beaten up to the point of unconsciousness. Along with the cockfights is a whole lot of betting and gambling. Owners of the roosters lose money or hens in the fights.

Also disturbing for a children’s movie is the amount of sexual content. A lot of risqué jokes are made about sex or private parts. Much of this will go over the heads of younger children, but it’s easy for older children and adults to pick up on it. Also, a couple human females are animated to show off their well-endowed chests.

Finally, UN GALLO CON MUCHOS HUEVOS has a brief line about praying to a confetti god. Also, an egg jokes about a chicken being demon possessed and tries to get rid of the demon, and a homosexual egg character makes a brief appearance

All in all, therefore, this rooster warrants some caution for parents and their children.