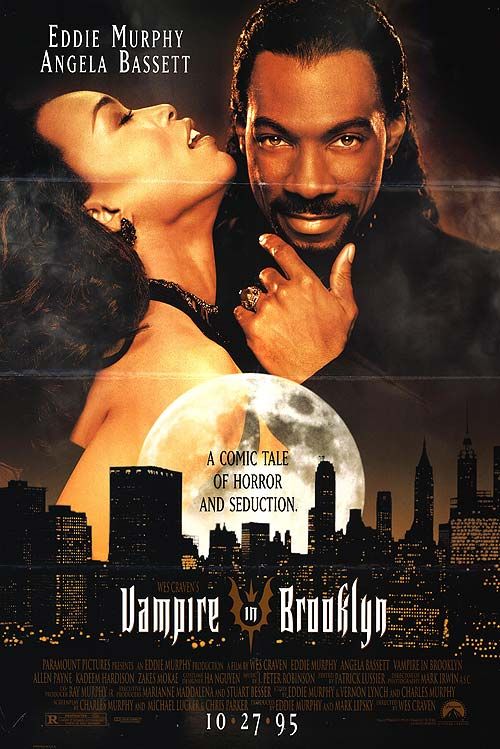 Take some urban comedy, apply the DRACULA storyline, refer to the cheesy BLACKULA and you have a formulaic but winsome VAMPIRE IN BROOKLYN. Eddie Murphy and Angela Bassett add street smarts and professionalism to a tired story and come up with a hip, contemporary comedy that values Jesus Christ, but serves up a plateful of gore and foul language.

Like NOSFERATU and DRACULA, VAMPIRE IN BROOKLYN starts with a ship filled with corpses. Hidden inside is the vampire, Maximillian, played by Eddie Murphy. Policemen Rita and Justice come on the scene and investigate the cause of the deceased crew. The evil-doer is indeed Maximillian, a black vampire from the Caribbean. He has come to Brooklyn to look for Rita, a woman who is half-human and half-vampire to turn her into a vampire and take her as his wife. Max employs a slacker named Julius to be his ghoul. When things begin to overwhelm Rita, she pays a visit to church. Through his evil ways, Max seduces her and bites her neck. She is now a vampire and will remain one forever after her first meal of blood. Justice arrives to put a stake through Max’s heart.

This movie will attract both Murphy and Wes Craven horror fans. Like many horror movies, this movie doesn’t scrimp on the blood and gore and is not for the squeamish. It will drive others away by its constant use of obscenities. Remarkably, however, this vampire movie hasn’t forgotten Jesus Christ. Rita is a churchgoer and recites the Lord’s prayer as a desperate plea for help. Thus, in this movie like the novel DRACULA, evil is overcome by the power of Christ, but the emphasis is on laughs, foul talk and gore.