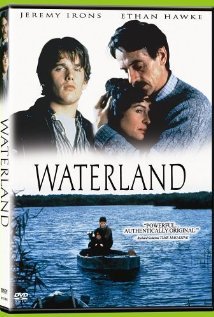 In WATERLAND, Tom, a tormented high school teacher re-visits his teenage sexploits in East Anglia. As Tom recalls his past, the class hops on an allegorical ride where they peek at teenage Tom fornicating with Mary and witness Tom's anguish as a witch cuts out Mary's insides and hands Tom the fetus. Evidently, sharing his testimony with the students helps him "undo" past mistakes. The film is confusing as well as perverse.

In WATERLAND, a tormented high school teacher re-visits his teenage sexploits. The nightmare begins when Tom Crick reaches a crisis in his marriage and teaching career. Overcome by his past, Tom drifts in and out of his childhood sexual experiences and envisions his students naked. As Tom recalls growing up during WWII in the marshlands of East Anglia, the class hops on an allegorical amusement park ride. They peek at 16-year-old Tom fornicating with sweetheart Mary and witness Tom’s anguish as a witch leads Mary into a dark room where she cuts out Mary’s insides and hands Tom the fetus to throw into the river. At times, students de-board the ride and ask questions.

All of this is confusing as we flicker in and out of Tom’s past and present, feeling nauseated at the perversion and the time jumps. As an adult, Tom weds Mary, who wrestles with trauma of having had the abortion. She kidnaps a baby from the Shop-N-Save, insisting that “God gave me this baby.” Of course, WATERLAND shows the horror of immorality without making moral judgements. Tom comes to the conclusion that life is meaningless, but fails to realize that his failure to distinguish between right and wrong made life appear meaningless.