YOU SHOULD HAVE LEFT

"The Devil’s House Will Find You Sooner or Later" 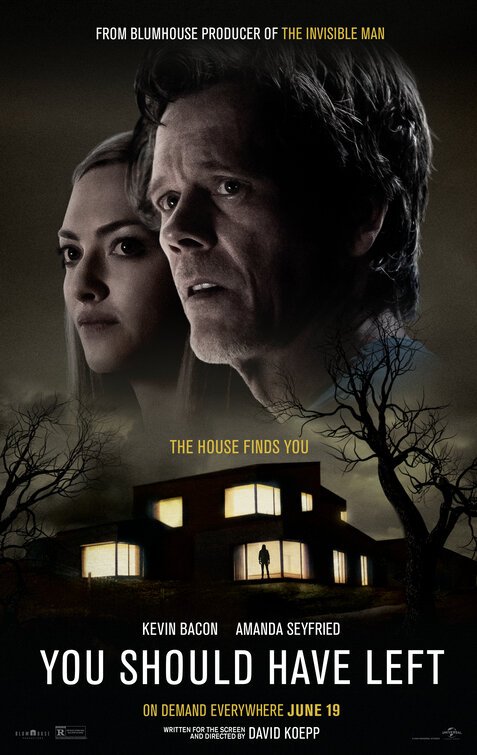 YOU SHOULD HAVE LEFT is a horror movie that’s more metaphorical than other horror movies. Theo, a wealthy, middle aged banker who temporarily moves his young wife, Susanna, and their daughter, Ella, to an isolated country house in Wales. They intend to spend a quiet family vacation there before Susanna, who’s an actress, spends eight weeks on a film shoot in London. Unknown to them, the house is said to be haunted by the Devil. The family is also haunted by a past sin that Theo’s hiding.

The spiritual metaphors and symbols in YOU SHOULD HAVE LEFT are more profound than most horror movies. Not only is Theo’s past sin catching up with him, the Devil is trying to bring Theo into his demonic fold. YOU SHOULD HAVE LEFT relies more on scary scenes of menace and entrapment rather than blood and gore. That said, there’s no redemption or Christian salvation. The movie also contains some “f” words and other foul language, plus occasional crude sexual content. YOU SHOULD HAVE LEFT may not be totally abhorrent, but it’s still excessive and unacceptable.

(C, B, OO, AbAb, LLL, VV, SS, N, A, MM):
Dominant Worldview and Other Worldview Content/Elements:
Light but undeveloped Christian, moral worldview where a sacrifice saves a man’s family from the Devi,l and a man guilty of hiding a past sin asks forgiveness in a climactic scene, but the man doesn’t escape the Devil and isn’t redeemed, so there’s no redemption or overt Christian salvation/deliverance from sin, and the Devil still wins something at the end, and belief in Heaven and the Catholic Church are mocked in a couple scenes
Foul Language:
14 obscenities (including several about eight “f” words), five strong profanities and 12 light exclamatory profanities
Violence:
Strong as well as sometimes light scenes of scary menace include a shadowy figure that sometimes turns into a man who haunts and menaces a man and his daughter, this man grabs them a couple times, scenes where a strange devilish house haunts and menaces the man and his daughter, the man and his daughter get trapped several times in an older house that seems to exist under the newer house, man and girl disappear through doors and passages linking the new house to the older house, images of a menacing shadows from a stairway, girl disobeys mother and climbs higher on a large tree limb but then falls from the tree limb into mother’s arms, woman’s dead body is shown lying in a tub of water two or three times, and a scene of murder is shown, but it doesn’t involve an actual physical attack
Sex:
Partially depicted marital sex in a car, several other crude references to sex and even adultery, and sounds of a woman moaning on a movie set during an apparent sex scene being filmed
Nudity:
Upper male nudity and image from behind of a woman taking off her top to take a bath
Alcohol Use:
Brief alcohol use
Smoking and/or Drug Use and Abuse:
No smoking or drugs, but a reference to use of medications that sometimes result in accidental deaths; and,
Miscellaneous Immorality:
Strong miscellaneous immorality includes jealousy, anger, man hasn’t dealt positively with a terrible past sin, but the man eventually confesses, and the movie implies a cautionary moral message about this, man keeps a terrible secret from his wife, and wife has a secret second cellphone that lets her keep in contact with a former lover.

YOU SHOULD HAVE LEFT is a horror movie about a middle-aged wealthy man who unknowingly moves his young wife, an actress, and their child to a devilish haunted house in Wales for a short vacation before the wife starts a long film shoot in London. YOU SHOULD HAVE LEFT is built more on scary scenes of satanic menace and entrapment rather than blood and gore, with an interesting story about being haunted by past sins and paying an ultimate sacrifice, but there’s some strong foul language, sexual content and no redemption.

In the story, Theo Conroy, a wealthy middle-aged banker businessman, who’s retired, moves his young Hollywood wife, Susanna, and their daughter, Ella, to an isolated country house in Wales. They’re planning a short vacation together before Susanna travels to London to shoot a movie for eight weeks. While Susanna shoots her movie, Theo and Ella will return to America, except for a visit halfway through Susanna’s film shoot.

The movie opens with Ella sleeping in her bed in the large Wales house and being visited by a strange scary man with a cane. The experience turns out to be a nightmare, but was it really?

The movie flashes back to Susanna’s previous film shoot in America. There’s some tension between Theo and Susanna because of Theo’s jealousy about a sex scene Susanna is shooting for the movie. Also, it’s revealed that other people don’t trust Theo because of some past trouble. This mistrust also bothers Theo, but he’s shown listening to a therapy tape that includes some psychological meditation techniques and writing a daily journal.

The family arrives at the isolated, modern looking country house in Wales. Strangely, the house looks bigger on the inside than it does on the outside. The first night the family lives in the house, Theo goes downstairs at 10:30 to shut off the lights in the rooms there while Susanna waits for him in bed. Downstairs, viewers see Theo being haunted by a shadowy figure that seems to be the man who haunted Ella’s nightmare. Also, some of the lights seem reluctant to be turned off, and Theo discovers some hidden rooms with more lights lit by someone. By the time Theo returns to the bedroom upstairs, Susanna’s fallen asleep, and the clock says it’s after 3 a.m. Theo doesn’t notice the time on the clock, however.

The second day arrives, and the movie reveals that Theo was married once before Susanna. His first wife was found drowned in the bathtub, apparently after taking one too many sleeping pills. Theo was tried for her homicide but was acquitted.

In the afternoon, Theo writes in his journal while Susanna and Ella play outside. The writing ends with Theo’s pen running out of ink, and Theo throwing the pen across the room. Before that happens, he’s shown writing some words of anger and frustration about being shunned by other people. When will it end,” he writes, before the pen suddenly runs out of ink.

Theo drives to the small nearby village to shop for food at the little grocery there. The grocer asks him some strange questions about the house and gives him a plastic triangle. He tells Theo to pay attention to the angles in the house.

More strange haunted moments and nightmares occur. The house seems to have another older house hidden below the current house. Both houses have similar rooms and long hallways, but the hallways in the older house seem twice as long. Using the triangle and a measuring tape, Theo discovers that the dining room next to the kitchen is five feet wider on the inside than it is on the outside. He also discovers that, according to a local legend, the Devil once built a tower on the same location to trap, entice or capture sinners, and that subsequent houses built over the demolished tower serve the same purpose. Theo’s told that it’s undecided whether people find the Devil’s house, or the Devil’s house finds them.

The movie’s second half shows Theo and his daughter being menaced by the mysterious supernatural powers in the house. In one scene, they try to escape the house by walking four miles to the village, but they end up right back at the house. So, the question becomes, can they and Ella’s mother, Susanna, ever escape the evil of the Devil’s house?

YOU SHOULD HAVE LEFT is more overtly metaphorical and symbolic than other horror movies of its kind. It relies more on scary scenes of satanic menace and entrapment rather than blood and gore. These qualities are to the movie’s credit. Also, the movie’s spiritual, moral metaphors and symbols have a profound nature, more so than usual. Though we never see the Devil or his demonic minions, the movie implies that the Devil preys on our sinful nature, and that our past sins have a way of still haunting us as we grow older. The movie also shows Theo in a battle against himself. This battle becomes quite literal at the end in a nice twist. Eventually, only a sacrifice can save Theo’s family from the Devil’s house.

That said, there’s no real redemption or Christian salvation in YOU SHOULD HAVE LEFT. Also, at one point Theo and Susanna mock the Catholic Church. At another point, Theo tells Susanna he doesn’t believe in Heaven. However, when Ella asks them about dying, Susanna encourages Theo to tell Ella that, although everyone eventually dies, they will all be together in heaven. This conversation is interrupted when Ella then asks Theo if all people go to Heaven. Theo never gets to answer this final question about death, but the movie’s ending implies that no, not everyone goes to Heaven. In fact, the ending also implies there will be no redemption for Theo.

Of course, Christianity teaches us that there is redemption through Jesus Christ, who died for our sins and delivers and saves us from the Devil and our sins. [POSSIBLE SPOILER FOLLOWS] At the end of YOU SHOULD HAVE LEFT, however, although Theo helps Susanna and Ella escape the Devil’s house, he cannot escape, because his sins are too great, and, apparently, his remorse and repentance, if they exist, are too small.

YOU SHOULD HAVE LEFT also contains some “f” words and other foul language, as well as a scene of partially depicted marital sex and other crude sexual references. This content was unnecessarily crude.

So, while YOU SHOULD HAVE LEFT may not be totally abhorrent, MOVIEGUIDE® has decided it’s still excessive and unacceptable. A stronger, more positive Christian presentation might have said this movie from itself.