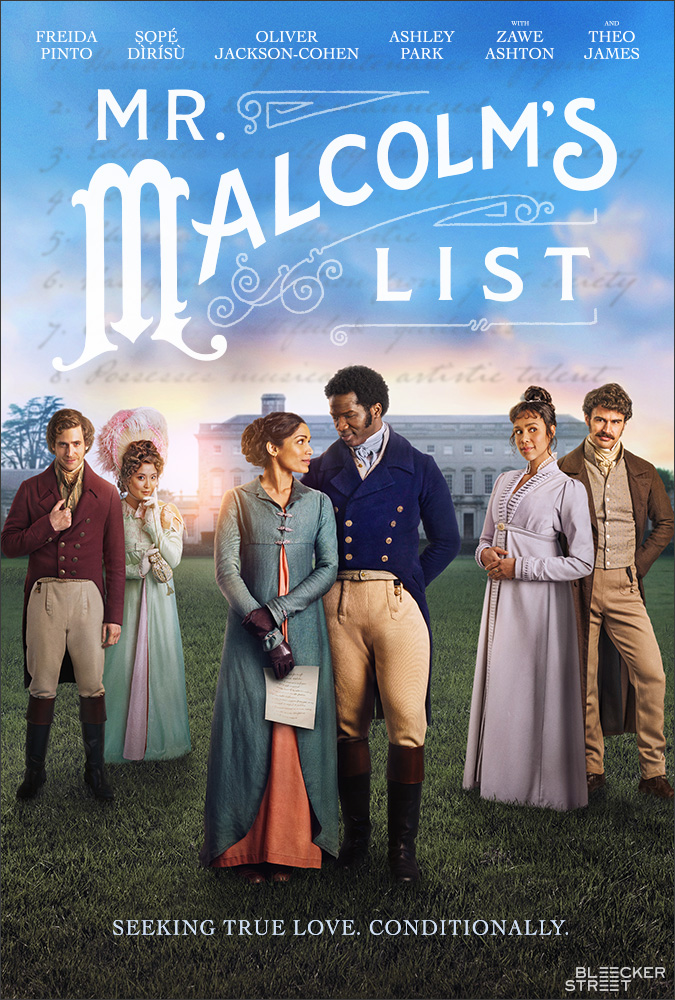 MR. MALCOLM’S LIST is a period piece set in Victorian England that conflates the plots of several Jane Austen novels. Mr. Jeremy Malcolm, a charming, rich bachelor in London, creates a list of qualities that any prospective woman he may wed must possess. Julia, one of his rejected prospects, finds out about his list. She persuades her cousin, Selina, to aid her in a revenge plot to treat Malcolm as badly as he has seemed to mistreat so many. However, Selina begins to disagree with Julia about Mr. Malcolm’s character. She develops serious feelings for him.

MR. MALCOLM’S LIST is well made, with fine performances and a joyful, rewarding resolution. It has a strong Christian, moral worldview. Mr. Malcolm creates his list in a genuine pursuit of prudence, although it becomes the catalyst for the movie’s conflict. Eventually, Julia comes to see her reaction to him as more unjust than what she endured. Meanwhile, Selina refuses to go along with Julia’s revenge plot. Finally, all the major ethical issues in MR. MALCOLM’S LIST are resolved with a clear observance of biblical values.

(CC, BB, L, V, A, D, M):
Dominant Worldview and Other Worldview Content/Elements:
Strong Christian, moral worldview includes female lead displays a genuine Christian faith and lives and acts from that framework and has positive redemptive, morally uplifting themes
Foul Language:
Two “d” obscenities or two light profanities
Violence:
Two people shoot some game birds, and there’s one scene with two characters yelling
Sex:
No sex scenes or sexual immorality, but there is some passionate kissing
Nudity:
No nudity, but there is some light female cleavage
Alcohol Use:
Characters drink wine, port and other period alcoholic beverages
Smoking and/or Drug Use and Abuse:
Brief smoking of cigars and a pipe, but no drugs; and,
Miscellaneous Immorality:
Some lying, misleading and revenge, but it’s rebuked and/or resolved positively.

MR. MALCOLM’S LIST is a period drama set in with a not-so-subtle origin in the novels of Jane Austen. A reader of Victorian Literature will quickly detect that the screenwriter’s Mr. Malcolm and his List are cut from the same cloth as Mr. Darcy’s perceived Pride and Prejudice in Austen’s famous novel, and that the ill-conceived rejection of Persuasion inspires the revenge plot in the movie.

Jeremy Malcolm, a very charming, rich bachelor in London, creates a list of desired qualities that any prospective woman he may wed must possess. Despite his attempt at prudence in pursuit of one of life’s most serious relationships, his list becomes the catalyst for much of the story’s conflict.

Julia Thistlewaite, one of Mr. Malcolm’s formerly rejected prospects, finds out about his list and becomes convinced that only a man of unmitigated pride and arrogance would create such a set of requirements. She persuades her cousin, Selina Dalton, to aid her in a revenge plot to treat Mr. Malcolm as badly as he has seemed to mistreat so many women. However, Selina begins to disagree with Julia about Mr. Malcolm’s character. She develops serious feelings for him and refuses to reject his overtures of love. So, the question becomes, Is Mr. Malcolm’s List a work of pride, prudence or a bit of both?

MR. MALCOLM’S LIST is a fairly clearcut conflation of the plots of several Jane Austen novels. The movie does manage to distinguish itself, however, by its quality performances. The two romantic leads turn in the most engaging and effective performances, but they get good support from the rest of the cast. Also, the main characters are crisply drawn and developed, the period costumes are excellent, and the movie has a strong Victorian feel.

One departure from the movie’s Victorian source material is found in the marked manipulative selfishness of Julia. Her vindictive conduct reflects more of a postmodern femme fatale than any of Austen’s heroines. Also, the movie uses modern notions of diversity to include black actors in its cast, when, historically, all the people in the movie’s English setting would have been white. These revisionist departures are annoying, but they don’t strongly detract from the movie’s overall good quality.

Despite its derivative foundation, the homage to Jane Austen in MR. MALCOLM’S LIST is, in some ways, the sincerest form of flattery. Happily, other than the “diverse” casting and the antagonist’s personality, the movie largely retains the traditional religious and cultural assumptions of the story’s time and setting. It also manages to show growth in multiple characters, and ends with a rewarding, appropriate, joyful conclusion.

MR. MALCOLM’S LIST presents a fairly straightforward biblical/moral worldview. Malcolm creates his list in the genuine pursuit of the virtue of prudence though it becomes the catalyst for much of the film’s conflict; Julia reacts against injustice and comes to see her reaction as more unjust than what she has endured; Selina refuses on many levels to go along with her cousin’s revenge plot and comes to truly understand the man she has come to love; and, gentlemen treat the ladies with the honor and respect that British Christendom upheld from the Age of Chivalry to the Victorian and Edwardian Eras. All the story’s major ethical issues are resolved with a clear observance of biblical charity.