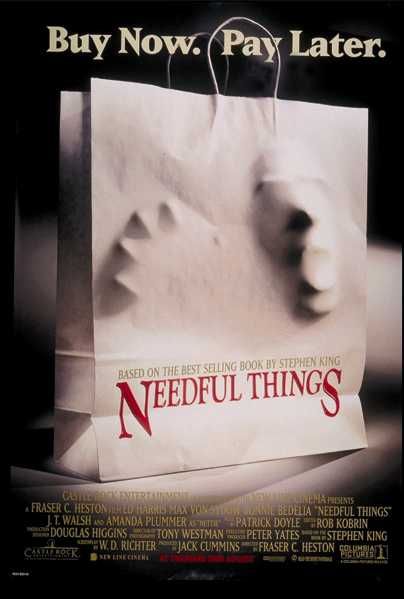 When a quaint seaside village in Maine erupts in violence, the only connection is newcomer Leland Gaunt and his antique shop in the horror film NEEDFUL THINGS. NEEDFUL THINGS is an exceptionally well-made movie fatally marred by graphic violence, an abundance of offensive language, including profanity and blasphemy, and a negative portrayal of the Church as a whole. The ending, however, is right on target: there are consequences to sin.

When the quaint and quiet seaside village of Castle Rock, Maine mysteriously erupts in violence, the only connection seems to be newcomer Leland Gaunt, played expertly by Max von Sydow, and his unusual antique shop in Columbia Pictures’ new horror film NEEDFUL THINGS. Ed Harris, as Sheriff Alan Pangborn, finds himself engulfed in chaos in a small town gone mad where residents turn on each other seeking revenge for some very hateful pranks. BASED ON the novel by Stephen King, NEEDFUL THINGS is an exceptionally well-made movie. The plot itself has great promise, which is nipped in the bud by the graphic depictions of some of the more evil pranks and the resulting harm (plus the abundance of offensive language–profanity in particular). Regrettably, the content is too graphic and offensive to be recommended. Christians will be offended by a blasphemous remark about Jesus Christ and a negative portrayal of the Church as a whole. Unfortunately, in this story the Church offers no remedy for the problems confronting the townspeople. The message in the ending, however, is right on target: there are consequences to sin. Individuals have a choice in every decision and action they take and are responsible for the outcome. No one has to be a slave to their desires, the choice remains their own.

Writer: W.D. Richter BASED ON THE NOVEL BY: Stephen King