NORM OF THE NORTH 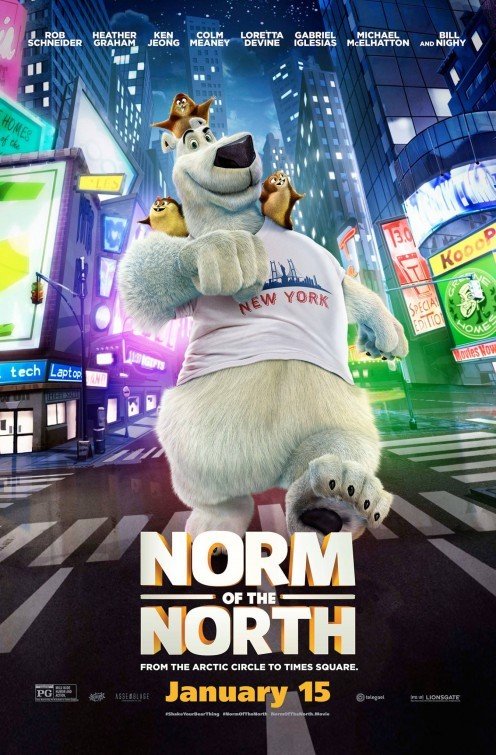 NORM OF THE NORTH is an animated family comedy about a polar bear able to communicate with humans which the other polar bears can’t do. When humans threaten to build condos in the Arctic Circle, Norm knows he must use his gift to save his family and home. He hitches a ride on a boat and travels to New York with a plan to stop the construction. Mr. Greene, who owns the condo company, doesn’t care about the environment or anyone but himself. He doesn’t care who gets in his way as long as he gets rich by building condos in the Arctic. Will Norm be able to stop Mr. Greene from building in the Arctic?

NORM OF THE NORTH is a mediocre animated movie with some cheesy dialogue and unimpressive animation. It has a strong pagan, environmentalist worldview with the entire plot being about saving the polar bears and the Arctic. There is, however, some underlying moral, redemptive elements about selflessness and helping your friends and family. Caution is advised because of some crude humor and the unbiblical, questionable worldview elements.

NORM OF THE NORTH is an animated movie about a polar bear that contains some questionable elements and scatological humor, but is mixed with some strong moral elements.

Norm is a polar bear who lives in the Arctic Circle, but he’s unlike all of the other bears. Norm is in line to be King of the Arctic, but he can’t even hunt for himself. There is something special about Norm, however. He has the ability to communicate with the human tourists constantly visiting the Arctic Circle. Norm’s grandfather tells him that he’s special, and someday he will be able to use his gift to help his family and friends, but Norm doesn’t believe him until the humans decide to build condos in the Arctic.

When Norm and his friends find out about the plans to build condos in their home, they devise a plan to stop the humans. Norm hitches a ride on a boat to New York City where Mr. Greene is planning the condo construction. When Norm gets to New York, he pretends to be an actor and becomes the mascot for Greene Homes. The public loves Norm, which he tries to use to his advantage to encourage everyone that the Arctic Circle should be left alone. Mr. Greene, however, has different plans and is on to Norm and his schemes to stop him from making a fortune.

Will Norm be able to stop Mr. Greene from building in the Arctic? Will he be able to convince his friends and family that he will make a good King of the Arctic?

NORM OF THE NORTH is a mediocre movie at best. It has some unimpressive animation, plot clichés and easy to write but unpleasant scatological humor.

Throughout the movie, Norm is kind and encouraging to everyone around him, but he really learns how special he is. He’s always looking out for others instead of himself. In the beginning, instead of eating a seal he has hunted and finally cornered, Norm lets the seal go because he feels compassion for the animal. Norm is the good moral voice of the story while Mr. Greene is the rich capitalist full of greed, who only wants to be powerful without regard for anyone else’s feelings.

However, NORM OF THE NORTH is full of false and politically correct environmentalist, anti-capitalist messages. The movie’s entire plot is about saving the polar bears from humans who are destroying the environment. The villain is a greedy businessman. Also, the dialogue is filled with jokes and references to global warming and environmental disaster, including jokes about ocean levels rising, humans destroying the Arctic and the Arctic melting.

Although Norm is seen as the hero in the story, he has some moments where he doesn’t choose the moral option. He breaks into someone’s office and steals something out of his desk, as well as lies about who he is and asks other people to lie for him. NORM OF THE NORTH does, however, have good messages about helping others and taking care of your family above yourself.

All in all, however, most media-wise families will want to skip NORM OF THE NORTH.

Watch NORM OF THE NORTH: