"How Not to Win Friends and Influence People" 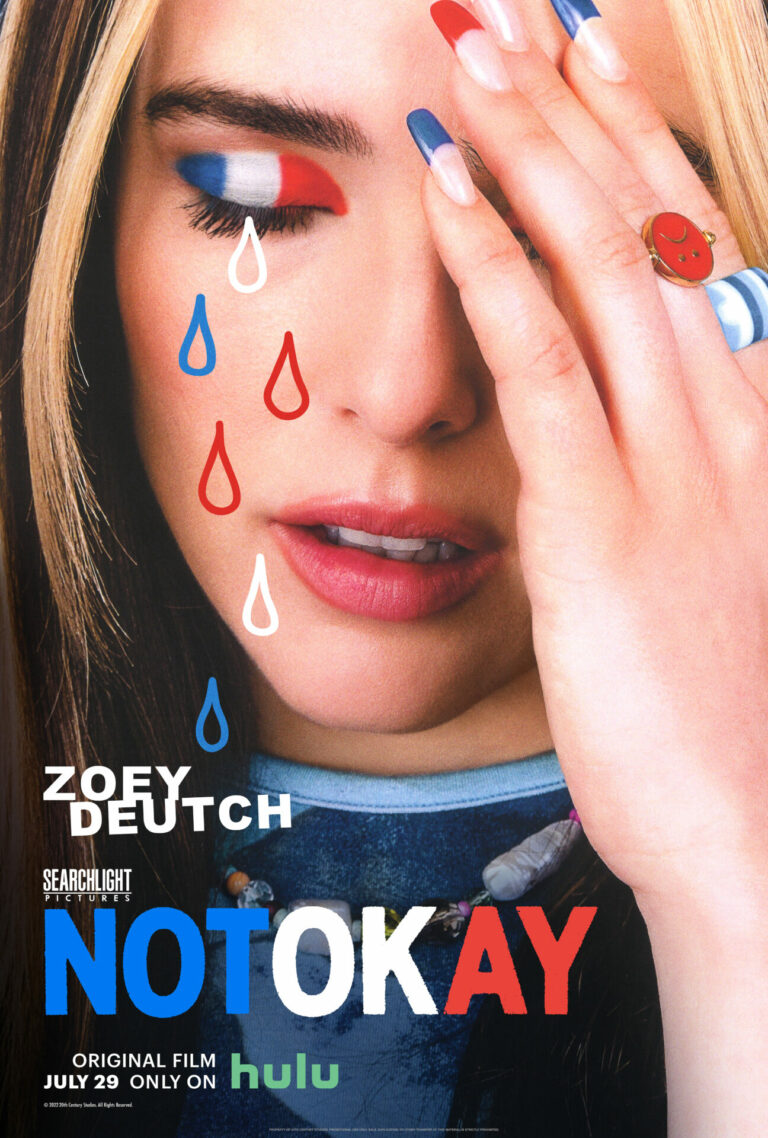 NOT OKAY is a satirical comedy on Hulu about a vain photo editor at a pop culture magazine called “Depravity.” No one on staff is Danni’s friend, though she enters the office each day with an insane level of confidence. Inspired by vacation photos of another person on social media, she concocts a lavish imaginary vacation for herself in Paris. When a terrorist attack happens at the same time, Danni devises fake posts about the attack’s effect on her. She also exploits a traumatized young victim of a school shooting. Will Danni’s lies be exposed?

NOT OKAY is a brilliant satire about the ways in which youthful obsession with social media can have disastrous consequences. As Danni, Zoey Deutch nails a performance that turns on a dime, going from comical to serious and back again. It’s refreshing to see a movie take a bold stand against the youth culture pushed so much by the media. Sadly, NOT OKAY has lots of strong foul language, a gratuitous sex scene, substance abuse, homosexual references, and a politically correct antigun message. So, extreme caution is advised.

(BB, C, PCPC, HoHo, LLL, V, SS, AA, DD, MM):
Dominant Worldview and Other Worldview Content/Elements:
Strong moral worldview satirizes young people’s narcissistic obsession with self and social media and then takes a surprise serious turn that teaches a lesson about the importance of honesty and consequences for the main girl’s rampant deceit, lead female wants to apologize for her wrongs even though no one wants to hear it, there’s a strong message against lying and vanity/pride, and movie also satirizes self-important young people in daring and hilarious fashion, but there’s a politically correct antigun subplot and lead character works at a place where other workers identify as homosexual, but they are shown to be overly mean and vapid, especially when she confesses to lying
Foul Language:
44 obscenities (mostly “f” words), one Jesus profanity and seven light God profanities
Violence:
Firecrackers go off to disrupt an antigun rally, traumatizing the main girl speakers who runs away crying in dismay, woman slaps a man, and some threats of violence, plus occasional brief news footage of a terrorist attack aftermath
Sex:
A fully clothed heterosexual couple is shown having torrid sex while standing up in a public bathroom (the woman later callously ignores the guy), and overt homosexual references
Nudity:
No nudity
Alcohol Use:
Alcohol use and drunkenness
Smoking and/or Drug Use and Abuse:
A young man constantly vapes in the multiple scenes, the vaping is shown satirically as an obnoxious habit and isn’t glamorized, the young man promotes marijuana use, marijuana use occurs, and lead character mixes a prescription pill with alcohol in one scene;
Miscellaneous Immorality:
An extremely vain young woman is self-obsessed to the point of lacking any care or concern for others (although this ultimately changes, making a powerful final lesson), woman lies about being in Paris on vacation to achieve social media stardom and then is forced to lie much more when a terrorist act hits that city and family and friends are concerned about her, woman lies to achieve and maintain fame and exploits an antigun activist and becomes very close to the activist and winds up getting on national TV with her at a rally, woman learns her lesson and wants to apologize and make amends with people but finds herself still vilified and eventually finds that the main girl she exploited won’t ever give her the chance to make peace.

NOT OKAY is a satirical comedy on Hulu about a vain and self-absorbed photo editor at a pop culture magazine called “Depravity” who invents fake photo stories to increase her popularity at work and her social media following online. NOT OKAY is a wise, brilliant satire about the many ways in which youthful obsession with social media can have disastrous consequences, but it features lots of strong foul language, a depicted sex scene, substance abuse, homosexual references, and a politically correct antigun subtext.

The movie follows the story of Danni Sanders (Zoey Deutch), who opens the movie tearing up while scouring the Internet and social media to find countless hateful, negative messages against her. After saying, “Be careful what you wish for,” the movie jumps back in time to reveal what led to this opening distraught moment.

Danni is a photo editor at a pop culture magazine called “Depravity” (which in itself is a spot-on critique of the garbage that’s spewed to young people as news these days). She is unbelievably vain and self-absorbed, and no one on staff is her friend even though she walks into the office each day with an insane level of confidence.

The reality is that Danni has a low-level job stylizing photos for the visual spreads in the magazine, and lives in a small, sparsely appointed apartment in New York City. Inspired by the vacation photos of another person on social media, she decides to concoct a lavish imaginary vacation for herself – a glamorous jaunt through Paris, crated solely to get attention.

Using her Photoshop manipulation skills, Danni serves up the trip of a lifetime online and quickly builds a following while also impressing her parents, who live across town. All seems to be going splendidly, until one morning she wakes up to find CNN featuring the breaking news that a series of terrorist bombs exploded across Paris.

Suddenly, Danni realizes she’s in deep trouble, as everyone will ask her for proof of her experiences from witnessing the bombings and their aftermath. Her parents are terrified for her well-being and even her coworkers are concerned about her for the first time.

Danni has to plan a way to get “back” from Paris while devising the stories and images she’ll share from the bombings’ aftermath. Remarkably, her ability to be totally dishonest pays off, a skill Danni’s developed by seeing her daily life through a delusional mindset of grandeur.

Danni’s parents worship her return, her coworkers applaud her, and her boss tells her to feel free to take days off or leave early anytime she wants to “help the healing.” Danni also sweet-talks her boss into letting her write a first-person essay about her experiences and the life lessons she supposedly learned.

That essay explodes her online popularity, as she starts the hit hashtag #notokay, and people of all types apply the tag to share their own tales of resilience. Danni even joins a trauma support group, just to soak up the attention of actually traumatized people and perfect how to sell her fake grief.

Danni finds out that a high school girl named Rowan (Mia Isaac) is in the group. Rowan’s a nationally acclaimed antigun rally leader who’s caught up in her cause because her own sister was the victim of a school shooting. Danni immediately thrusts herself into Rowan’s life, both to have a good friend for the first time ever, and, it turns out, to feed off her fame by insinuating herself into Rowan’s rallies.

Trouble awaits, however, as a fellow writer and colleague is upset at Danni’s suddenly plum assignments and so decides to investigate her suspicions that Danni never actually was in Paris.

Will Danni be able to survive her lies and deceit, and not get caught? Can she also continue to successfully manipulate Rowan?

The way those questions are answered are inventive and funny at first, before writer-director Quinn Shepherd deftly turns the movie’s tone and message into a serious direction that surprises all the way to the end. Both her screenplay and her direction are brilliant, and she manages to keep the antigun rally and discussion scenes from being heavy-handed, and instead uses them to lend humanity to the issue of school shootings.

Zoey Deutch is a revelation in the role of Danni, as she nails a performance that turns on a dime constantly from comical to serious and back again. It’s one of the sharpest acting turns in many years.

Bonus points to Deutch and Shepherd for their stunningly sharp satire on trash pop culture, vaping, millennial self-absorption, social media, and so much more. It’s truly refreshing to see a movie take a bold stand against the youth culture pushed by so much of the media. Incredibly, Shepherd had to add a sarcastic warning card at the start warning viewers of an Unlikeable Female Protagonist because, in test audiences, young women reportedly were triggered by seeing a female villain as the lead.

Sadly, there are frequent obscenities (about 30 F words and a few others) and a brief sex scene in NOT OKAY. Tone can affect how badly the foul language comes across. Here, it’s part of the vapid lingo of the young adult characters and matches the airheaded usage of it in which many millennials engage. NOT OKAY also has come substance abuse, homosexual references, and a politically correct antigun message.