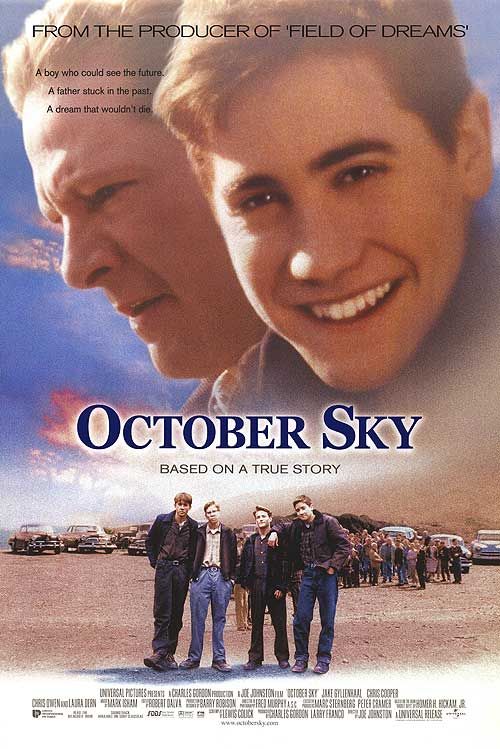 Based on a true story, the movie tells how a West Virginia teenager named Homer in 1957 starts building home-made rockets with his friends so that they can eventually win a prize at the state science fair. Homer's father is the major obstacle the "rocket boys" face in their goal to escape the confined world of their mining hometown. The movie's pro-family, moral worldview is marred by more than 30 obscenities and one line of dialogue about teenage premarital sex that is not rebuked.

Moderately moral, pro-family worldview with one brief shot of people closing a prayer with "in Christ's name" & one "Thank God" uttered; 32 obscenities & 3 profanities, plus a couple minor vulgarities; mild violence with rockets exploding & a couple chasing people or hitting building, man shoves other man away from minor coal cave-in, & man dies from major off-screen cave-in, plus father & son argue; no sex but boy tells another boy he'll now have trouble losing his virginity & teenage couple sits in park car in one brief shot but are interrupted; upper male nudity; alcohol use & boys use moonshine to keep rockets from exploding; smoking; some pagan elements; and, labor unrest & father shows favoritism toward one son over another but disfavored son shows rebellious character that is not really rebuked, though the movie argues in favor of reconciliation and mutual support among family members.

Joe Johnston, the director of ROCKETEER and JUMANJI, has a knack for filming old-fashioned adventure stories. His new movie, OCTOBER SKY, displays the same talent, but Johnston adds to this ability a knack for old-fashioned family drama as well. The only modern aspect to this movie seems to be the amount and kind of foul language.

Based on the autobiography of Homer Hickam, OCTOBER SKY begins with the residents of Coalfield, a mining town in West Virginia, filled with awe like the rest of the world when the Soviet Union launches the first satellite, Sputnik, in 1957. No one is more fascinated by the event than Homer Hickam, the young teenage son of John Hickam, the foreman of the local mine. An aimless youth who is not good enough to get a football scholarship like his brother, Homer decides to start making his own rockets. He enlists the help of his two friends, O’Dell and Roy Lee, but they only manage to damage his mom’s beautiful white picket fence.

Homer decides to enlist the help of the class nerdy intellectual, Quentin, much to the chagrin of his buddies. Homer’s enthusiasm is infectious, however, and the boys begin a rocket building program, egged on by their teacher Miss Riley, who thinks the boys have a shot at winning a prize at the state science fair. Homer even manages to enlist the help of a couple of the local mining engineers. The only person who is not enthusiastic about Homer’s hobby is Homer’s father, who longs for his boy to someday follow in his footsteps and become foreman of the mine, a leader among the local townspeople.

Gradually, the “rocket boys” begin to have some success with their contraptions. They even set up a special launching pad at the local slag heap, complete with a small blockhouse. Trouble ensues, however, when the local authorities believe that one of their rockets started a small forest fire. Their chances of going to the state science fair begin to dim. Furthermore, Homer’s relationship with his father takes a turn for the worst until the movie’s heartwarming finish.

For pure entertainment value, there are few American directors working today who can match the talent of Joe Johnston. With OCTOBER SKY, Johnston’s talent has matured to include realistic human drama in a family setting. He gets marvelous performances from his cast, especially Jake Gyllenhaal as Homer and Chris Cooper as Homer’s father, John. Gyllenhaal is perfectly cast as the West Virginia boy determined to pursue his crazy dreams. Cooper gives solid dignity to the character of Homer’s father, even when he’s mad at Homer or yelling at him. Although the ending to the movie is drawn out a little too much, the resolution of the conflict between this stubborn father and equally stubborn son should retain the interest of most people who go see this movie. Johnston and his team succeed in creating a wonderful, vivid depiction of an historic time and place.

Many family dramas rely on conflict between parents and children. Naturally, this leads such dramas to sometimes show rebelliousness of children against parents and mistreatment of children by parents. This is the case with OCTOBER SKY, but the movie also argues in favor of reconciliation and mutual support and respect among its family members. This wholesome quality to the movie is marred, however, by too much foul-language and a line of dialogue about teenage premarital sex that is not rebuked.