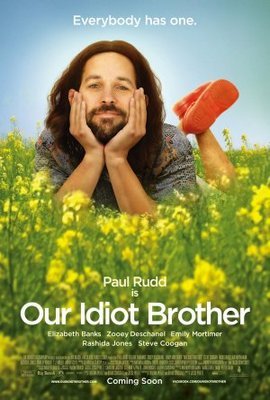 OUR IDIOT BROTHER stars Paul Rudd as the perennially upbeat Ned. Ned is an organic farmer whose willingness to rely on the honesty and goodwill of humankind is a less-than-optimal strategy for a trouble-free life. When he’s released from jail after being convicted of selling marijuana to a police officer, his girlfriend, who’s found a new beau, keeps the dog and kicks him off the farm. Homeless, jobless and dogless, Ned heads to his childhood home on Long Island. There, he gets help and advice from his alcoholic mother and three sisters. His sisters tell him family comes first and their doors are always open. Ned takes them at their word, but his idealism brings to light the many dysfunctions in the lives of his sisters, who are blame Ned when things go wrong.

(RoRoRo, B, HoHoHo, Pa, EE, FeFe, LLL, V, SS, NN, AA, DDD, MMM) Very strong Romantic with some light moral content about family coming first and the importance of weathering the challenges of life together, very strong homosexual content, including bisexual and lesbian couple passionately kiss, swingers and man kisses man on cheek while in bed with him and another woman after telling man he’s not into men, plus New Age healing with guru, title character is an environmentalist into organic farming, and some strong feminist content regarding title character’s overbearing sisters; 70 obscenities and 20 profanities and some scatological content such as man pretends to urinate in child’s juice box; light action violence when man teaches boy martial arts and in playing boy breaks finger; strong sexual content includes graphic discussion, two women kiss, man in bed with woman and another man tries to joins them, unwed pregnancy, woman cheats on her lesbian girlfriend with man; upper female nudity in drawing of nude woman in an art class, upper male nudity when man poses nude for art class, married man covers private parts with his hand when he’s caught with another woman, rear male nudity, and other upper male nudity; widespread moderate drinking at family events overshadowed by alcoholic mother who’s never seen without a glass of wine and eventually passes out with one still in her hand; heavy illegal drug use, man sells illegal drugs to uniformed police officer and goes to jail, growing of illegal drugs on organic farm, man refers to smoking illegal drugs in violation of parole and with his neighbor’s child; and, hippie lifestyle on organic farm and recycling of wax in artisanal candle shop, dominating female characters, female journalist willing to violate ethics in order to get ahead in the working world, lying, deceit, thoughts of aborting love child so as to avoid confessing infidelity to lesbian partner, sister excuses adulterous brother-in-law because his wife doesn’t look as attractive after having their baby.

OUR IDIOT BROTHER wants to be a quirky comedy drama (in the vein of LITTLE MISS SUNSHINE) about a dysfunctional family and the idealist brother Ned who brings his sisters closer together.

The perennially upbeat Ned is a biodynamic farmer whose willingness to rely on the honesty and goodwill of humankind is a less-than-optimal strategy for a trouble-free existence. When he’s released from jail after being convicted of trying to sell marijuana to a police officer, he discovers that life as he knew it has passed him by. His girlfriend, Janet, has found a new beau and boots Ned off the farm. She even refuses to turn over Willie Nelson, the golden retriever with whom Ned shares a special bond.

Homeless, jobless and dogless, Ned heads to his childhood home on Long Island. There, his mom Ilene, estranged from her husband, has turned to alcohol and is never caught without a glass of wine in her hand (she passes out later in the movie with one still in hand). Nonetheless, Ilene looks forward every week to the meal she shares with her son Ned and her three daughters: uber-mom Liz married to wealthy documentary film maker Dylan, with whom she has a seven-year-old son and a baby daughter; the ambitious Miranda (a staff writer for Vanity Fair addicted to her Blackberry); and, the “free-spirited” Natalie, a bisexual recently committed to moving in with her girlfriend Cindy. The sisters are full of advice for how Ned can get back on his feet. They tell him that family comes first and their doors are always open to him.

Faced with the choice of staying at home with the mom who loves him but drinks constantly, or couch-surfing with his sisters until he has enough cash to get his own place, Ned takes Liz at her word and shows up at her Brooklyn brownstone. For a while, things seem to be looking up. Dylan gives Ned a job on his latest film, Natalie gets him hired as a nude model for a painter (who gets her pregnant behind her lesbian lover, Cindy’s, back), and Miranda pays him to drive her to an interview for Vanity Fair.

Soon enough, though, Ned’s idealism and good nature brings to light the many dysfunctions in the lives of his sisters, who are quick to blame Ned for destroying their happiness. Miranda faults Ned for refusing to support her unethical journalism practices. Liz hates him for finding her husband naked with another woman. Then, when Natalie misleads Ned into thinking her girlfriend is supportive about her having another man’s baby, he inadvertently reveals his sister’s infidelity to her lesbian lover.

Sadly, the importance of family as the bedrock of a meaningful life is eclipsed by a broken, flawed and depressing view of humanity. Instead of humorously drawing the viewer’s attention to the inevitable brokenness of human existence and suggesting a viable, hopeful alternative, OUR IDIOT BROTHER leaves us with the impression that the best we can do when the world kicks us down is to turn to family because there’s no other help coming. The movie’s lack of transcendental values is clearly expressed in a New Age-type scene wherein characters find release from their sufferings and meaningless existence by sharing recent successes with one another in the “win room,” a kind of sauna where devotees go bare their souls.

OUR IDIOT BROTHER is a really dysfunctional movie about a really dysfunctional family. It’s full of content that will offend even mature, media-wise viewers. OUR IDIOT BROTHER contains excessive foul language, off-color jokes and other lewd content, strong homosexual content, drug abuse, and excessive miscellaneous immorality – all at the expense of a weak storyline that fails to showcase the strengths of an all-star cast.