"A Queen Checks the Kings" 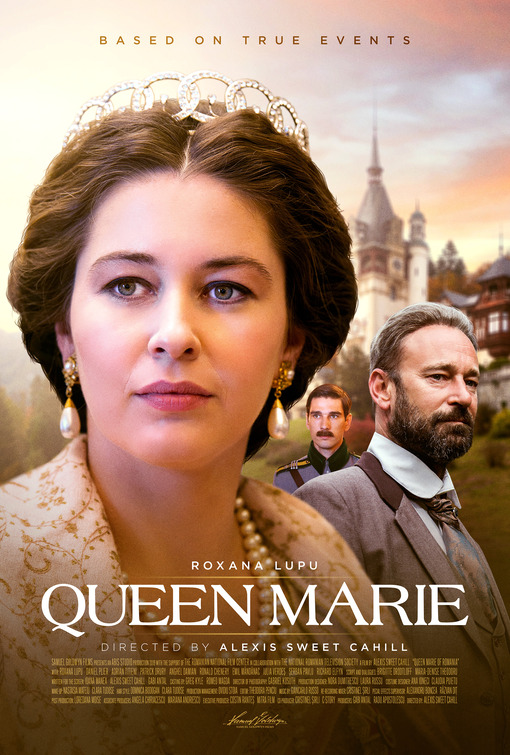 QUEEN MARIE is a Romanian movie about Romania fighting to retain control of what they call Greater Romania at the Paris Peace Talks after World War I. Queen Marie is the granddaughter of Queen Victoria in England and the cousin of King George, as well as the granddaughter of the Russian royal family. So, King Ferdinand decides to send her to the Paris Peace Talks to try to save Romania from being carved up by the Allies. However, her mission is opposed by a significant minority of the King’s pricy council and by their own son, Prince Carol.

QUEEN MARIE well-made but marred by an extraneous scene of fornication and a skewed nationalistic worldview. In fact, the Romanian people were only part of what is called Greater Romania, which includes Transylvania, Moldova and other nearby regions. Many of the people living there weren’t part of the Romanian people group, but were Germans, Hungarians, Slavs, Russians, and Turks, who were opposed to the concept of Greater Romania. QUEEN MARIE is an interesting movie, but not good enough or wholesome enough to demand a viewing.

(B, CC, PaPa, RHRH, V, SS, NN, A, D, MM):
Dominant Worldview and Other Worldview Content/Elements:
Moral worldview with lots of Christian content marred by a very explicit sex scene and a very nationalistic view of history from a Romanian point of view
Foul Language:
No foul language
Violence:
Newsreel footage of World War I in Romania which isn’t explicitly violent and discussions of the aftermath
Sex:
Very explicit sex scene of the son of Queen Marie and King Ferdinand of Romania having sex with his mistress where she’s on top of him with upper female nudity
Nudity:
Upper female nudity, upper male nudity, rear female nudity
Alcohol Use:
Alcohol use throughout
Smoking and/or Drug Use and Abuse:
Smoking throughout but no drugs; and,
Miscellaneous Immorality:
Partisan political perspective, Queen asserts her rights, opposition party and her son refutes the Queen with extreme anger, Romanian Prime Minister’s anger with the Paris peace talks, President Wilson’s dogmatic positions, Clemenceau and Lloyd George discount Queen Marie of Romania, Prince Carol of Romania refutes his father and mother, the King and Queen, and overlooking the extreme population disparity in greater Romania.

QUEEN MARIE is a elegant Romanian movie that tells the story of the King and Queen of Romania fighting diplomatically to control of what they call Greater Romania at the 1919 Paris Peace Talks ending World War I . QUEEN MARIE is a well-made, beautifully filmed historical movie marred by an extraneous scene of fornication and a narrow nationalistic worldview.

The movie opens with documentary footage from World War I showing Romania joining the Allies of France and England, but being conquered quickly by the Germans and forced to submit to a German treaty, which is a treaty that King Ferdinand of Romania never ratifies. The movie then moves to show Queen Marie taking ambulances full of bread and medicine to the impoverished, war-ravaged citizens of Romania on the outskirts of Bucharest.

Cut to the Paris Peace Talks, where the Romanian Prime Minister is frustrated by Prime Minister Clemenceau of France, Lloyd George of Britain and President Wilson’s refusal to listen to the claims of Romania to control what they call Greater Romania, which includes Transylvania, Moldova and other regions no longer in Romania. The allies hold the treaty that Germany forced on Romania against Romania.

When the talks break down, it’s decided to send Queen Marie, who’s the granddaughter of Queen Victoria in England and the cousin of King George, as well as the granddaughter of the royal family of Russia, to travel to Paris to try to save Romania from being carved up by the Allies. At the beginning of WW I, Romania was on the side of the Allies but Germany quickly occupied Romania and Germany imposed a treaty which turned England, France and America against Romania. A significant minority of King Ferdinand’s’ privy council objects to royalty, especially the Queen, acting as diplomats.

Meanwhile, Queen Marie and King Ferdinand’s son, Prince Carol, vehemently lashes out against the King and Queen to oppose her mission. Queen Marie at one point expresses concern that she’s trying to save Greater Romania while her family’s falling apart. Prince Carol married a commoner and believes the world has changed. The King and Queen have gotten the marriage annulled.

After a heated argument with the King, Marie goes to confront Prince Carol, interrupting him by have a maid knock on on Carol’s door while he is having sex with his mistress. Marie threatens Prince Carol that she and his father will designate his younger brother, Nicky, the next king; so, Carol submits, and they eventually command him to go to Transylvania.

Queen Marie takes a royal train to Paris only to find that the Romanian Prime Minister has filled her schedule with tea parties and garden parties to keep her from interfering in diplomacy. She confronts him, and then gets a meeting with Clemenceau of France, and challenges him with the fact that Romania lost many soldiers’ lives fighting Germany and needs to be supported by France. She meets with Prime Minister Lloyd George, who treats her as a foolish woman, but she outsmarts him.

Queen Marie then travels to London to meet her cousin, King George, and bends King George to her will, which turns Prime Minister Lloyd Gearge to her side. She meets with her son, Nicky, who doesn’t want to leave England and thinks Romania is just an impoverished third world country. She returns to Paris and gets a meeting with American President Woodrow Wilson’s wife, who sets up a lunch with President Wilson whom she also convinces to support Romania and warns him of the threat of Communism in Hungary.

When she returns to Romania, however, her son, Carol, gets the King and the privy council to dismiss her success, which sends her into a nosedive. She retreats to a country palace. However, the King comes to visit her, apologizes and tells her the news that they will rule a greater Romania thanks to her diplomacy.

QUEEN MARIE would be a powerful movie except for the very explicit sex scene. It is slightly tilted in its recreation of history, but costumes and staging are excellent.

For anyone who knows the history, the movie does point out that President Wilson was blind to the real situation in Europe and created the problems which precipitated the Second World War. The conservatives like Churchill understood the foolishness of Wilson and even the liberals like John Maynard Keynes got fed up and left the peace talks. The great historian Otto Scott has called Wilson one of the four great fools of history even though Wilson had the highest IQ, next to President Jimmy Carter, whom Scott most likely would have called a great fool if Scott had lived longer. Of course, IQ probably doesn’t measure political, diplomatic intelligence, and, in Wilson’s case, it just measured arrogance and academic ability.

Aside from the sex scene, there’s a deeper problem in the movie QUEEN MARIE. The Romanian people remnants of the Roman Province, from whence they take their name, were just one of many people groups in the territory claimed as Greater Romania. Many of the people weren’t part of the Romanian people group, but were Germans, Hungarians, Slavs, Russians, and Turks, who were opposed to the concept of Greater Romania. Transylvania has traditionally been Hungarian, and the most industrious people there were often the German tribes. In fact, both Ferdinand and Marie came from Germany ancestries and usually spoke German to each other. So, if you know history, the movie is extremely biased. If you don’t, you should read the book, DANUBIA, a book by Simon Winder about the Hapsburg family that ruled most of Central Europe, Austria and Germany for almost 500 years.

In any event, the Romanian monarchy lasted until the Soviet occupation, which brought on one of the most oppressive communist regimes in the world and ended in 1989. Now, many Romanians look lovingly back at the monarchy and have returned the royal properties to Ferdinand and Marie’s descendants.

Queen Marie was clearly an incredible woman. She spent much time nursing the victims of WW I, as did her daughters.

If you love historical movies and can put up with the sex scene, QUEEN MARIE is an interesting movie, but not good enough to demand a viewing.