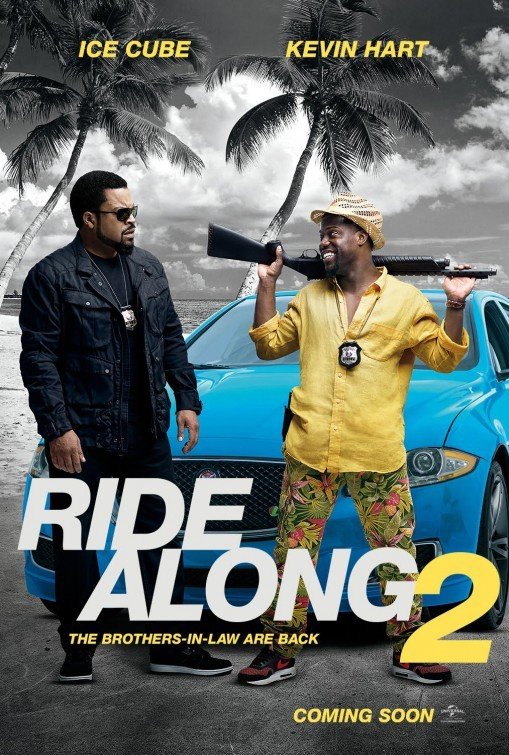 RIDE ALONG 2 reteams Ice Cube and Kevin Hart as the gruff hard-charging veteran police detective James and his sister’s fiancé, Ben, a rookie cop. The new movie takes place after Ben graduates from the police academy and is a rookie shadowing James on an undercover drug-sting operation to find the killer of Atlanta’s port commissioner. As usual, however, Ben’s over-enthusiasm for action again blows the operation. Now, the two men must work with a hacker and a tough-as-nails female cop to bring down the head of the smuggling operation who killed the port commissioner.

The plot in RIDE ALONG 2 is a simple one, but it works much better than anticipated. That’s because of the ace chemistry between Ice Cube and Kevin Hart as the two mismatched police detectives. The result of all this is a fast-moving, good-natured comedy. RIDE ALONG 2 has a strong moral worldview overall, with some brief but overt positive Christian content positively depicting a clergyman. However, there’s a significant amount of foul language and some other off-color, immoral content. So, MOVIEGUIDE® advises strong to extreme caution.

(BB, PP, CC, Pa, FR, LLL, VV, DD, MM) Strong moral worldview set in a comical world with a positive view of American police and a Christian wedding where the pastor comically but respectfully says, “All we can do is pray for them,” mitigated by some pagan, antinomian, immoral elements where two policemen believe they can do almost anything to stop the bad guys, and where there’s a significant amount of foul language and some implied sexual immorality and innuendo; about 25 obscenities and five profanities; fast-paced action violence with no blood involves multiple gunfights and car chases with reckless driving and car crashes resulting in explosions, police car gets bombed, some slapstick violence, and one cop threatened by an alligator and gets his foot caught in its mouth for a moment; implied fornication in one scene where policeman’s fiancée dresses like a naughty policewoman, showing her panties and bra as part of the costume, and waves some handcuffs at her fiancée before the scene cuts away, with man later shown shirtless and waking up with the cuffs on one wrist still, plus a computer hacker is shown talking slightly dirty for a few moments on Skype with a woman who’s flashing her cleavage at him alluringly, couple cohabitates before getting married, and a few other moments show women in bikinis, depicted lustfully; upper male nudity, female cleavage, woman in underwear, and women in bikinis; no alcohol use; no smoking but references to drug dealing by villains; and, weapons and other smuggling by villains, main villain plan even bigger smuggling operations, and cops disobey orders to stay out of further action and lie and use deception to trick their way into homes and offices and stop the bad guys.

The far superior sequel to the 2014 cop comedy smash hit RIDE ALONG, RIDE ALONG 2 follows the mismatched buddy cops travel from Atlanta to Miami to capture a computer hacker before a criminal can kill him, while one of the cops also has to endure comically stressful wedding preparations. RIDE ALONG 2 has a strong moral worldview with a brief Christian wedding ceremony featuring a positive depiction of a clergyman, mitigated by some light pagan, antinomian elements, including a significant amount of foul language and some innuendo.

The movie reteams hard-charging veteran police detective James, played by Ice Cube, with his sister’s fiancé Ben, played by Kevin Hart, who was a security guard at the start of the first movie before saving the day and becoming a cop. The new movie takes place after Ben graduates from the police academy and is a rookie cop shadowing James on an undercover drug-sting operation to find the killer of Atlanta’s port commissioner.

Ben’s over-enthusiasm for action once again blows the operation. The cops not only lose $100,000 in money designated for use in a drug deal sting, but also lose track of a computer hacker named AJ (Ken Jeong), who works for a businessman named Antonio Pope (Benjamin Bratt). AJ flees to Miami after transferring large amounts of money from Pope’s bank accounts to his own.

AJ also had heard Pope give the order to have a hitman shoot the port commissioner dead. So, he’s in double danger of being killed by the crime lord and his minions. The key to bringing Pope down for the murder and his smuggling plans is to find the decryption key for Pope’s records, but they are on his personal laptop deep within his mansion. The cops team up with AJ and a hard-charging female cop (Olivia Munn) to engage in a series of wild chases and disguises to find what they need.

The plot in RIDE ALONG 2 is a simple one. It also has all the by-the-numbers twists that anyone familiar with the police comedy genre can see coming. Yet, RIDE ALONG 2 works much better than anticipated. The reason for that is the ace comic chemistry between its stars, Ice Cube and Kevin Hart. They receive criticism from some African-Americans for being silly rather than serious movie heroes, but the humor has almost nothing to do with their race or anyone else’s. In fact, the interplay between them merely carries on the classic comedy tradition of Abbott and Costello and Dean Martin and Jerry Lewis. So, it’s frankly refreshing to see such good-natured comedy from African-American performers, when so much of that comedy scene is often reliant on coarse language and humor to succeed.

In addition, the characters of James and Ben are positive role models despite their bending the rules. They always are determined to stop criminals, and they are solidly middle-class. Also, one is about to get married, and the other is shy, rather than being a womanizer as some movie cops are in other movies.

Director Tim Story handles the action in bracing fashion, with a particularly funny foot chase and a spectacular car chase that writers Phil Hay and Matt Manfredi have given a clever spin. After Ben has been criticized for his obsession with fast-driving video games, he finally gets the chance to drive while pursued by criminals and winds up being an incredible stunt driver because he applies the tricks he learned in the games.

The result of all this is a fast-moving, good-natured comedy with a relative minimum of foul language when compared to most other movies in the action-comedy genre. The naughtier aspects are relatively quick onscreen and imply rather than show sex.

All in all, RIDE ALONG 2 is great fun, but strong to extreme caution should be applied to adult viewers and teenagers, including older teenagers because of the foul language and some dirty jokes and innuendo.