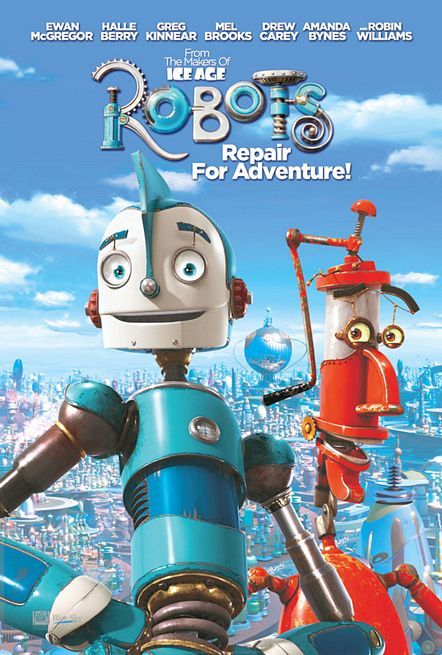 ROBOTS is a new animated comedy from the director of ICE AGE. Herb Copperbottom, a lowly dishwasher robot, raises his young son, Rodney, with a clear understanding that Rodney can do whatever he sets his mind to do. Rodney becomes an excellent inventor, so he heads for Robot City to meet Mr. Bigweld, who says that his door is always open to young inventors. Rodney finds, however, that the evil Ratchet and his devilish mother have seized control of Bigweld’s industries and are trying to phase out all obsolete robots. Rodney, along with some newfound friends, have to save Mr. Bigweld and fight the forces of darkness.

ROBOTS is brilliant! It is extremely funny and has a great deal of heart. The script is full of great dialogue, good pacing and wise moments of emotional release. When the audience thinks they have the script just figured out, it surprises you. Best of all, every surprise, every step, every piece of dialogue emphasizes the good. There is some Loony Toons humor about body parts and even cross-dressing jokes, but good is clearly good, and it is hard to imagine a more pristine PG-rated movie.

ROBOTS is brilliant! It is one of the best movies of 2005.

The movie opens in a little robot suburb with Mr. Copperbottom exclaiming that he’s going to have a baby while giving cigars to all his friends. When he gets home, Mrs. Copperbottom tells her husband that he’s already missed the delivery. She hands him a special delivery box with a do-it-yourself robot kit, and add the humorous insight that making the robot is more fun than delivering it. A typical father, Mr. Copperbottom struggles with putting some of the parts together.

Although Mr. Copperbottom is a lowly dishwasher, he raises young Rodney with a clear understanding that Rodney can do whatever he sets his mind to do. Together, they watch Mr. Bigweld’s television program where Mr. Bigwell emphasizes that anybody can shine and that his door’s always open to young inventors.

Growing up with hand-me-down robot parts, assembled each year to make him grow, Rodney turns out to be an excellent inventor and heads out to Robot City to meet Mr. Bigweld. What he finds is that the evil Ratchet and his devilish mother, Madam Gasket, have seized control of Bigweld’s industries and are trying to phase out all the obsolete robots in the interest of more profits and control. Robots either have to upgrade or they’re melted down. Rodney, along with some newfound friends, has to find the imprisoned Mr. Bigweld and fight the forces of darkness to save the robots.

Created by the team that did the blockbuster animated hit ICE AGE, ROBOTS is extremely funny and has a great deal of heart. The scenes with Rodney and his dad will bring tears to the eyes of some dads throughout the world. The script is full of great dialogue, good pacing and wise moments of emotional release. When the audience just thinks they have the script figured out, it surprises you. Moreover, every surprise, every step, every piece of dialogue emphasizes the good. Bigweld is a good businessman, Rodney is a creative inventor, people have limitations but try to do the right thing, and the message is, “See a need, fill a need.” Rodney even wants to help his dad fulfill his forgotten dream.

The animation is wonderfully inventive, detailed and colorful. The cast of cartoon voices is filled with talented people, including some in cameos, who lend a great spirit of wacky comedy and warm characterizations.

Unlike Disney movies, ROBOTS contains some Loony Toons aspects, plus some scatological references. For example, artsy-fartsy emphasizes the first syllable of the last word. Also, armpit noises, anatomical features and even a bit of cross dressing are used unnecessarily to spice up the story.

These elements are not oppressive, however. Good is clearly good, and it is hard to imagine a more pristine PG-rated movie.

All in all, ROBOTS is acceptable for a broad range of the broad family audience, with the slightest of MOVIEGUIDE® media-wise cautions. The end of ROBOTS is a powerhouse. This reviewer wants to see the movie again, and that tells you just how good this movie is.