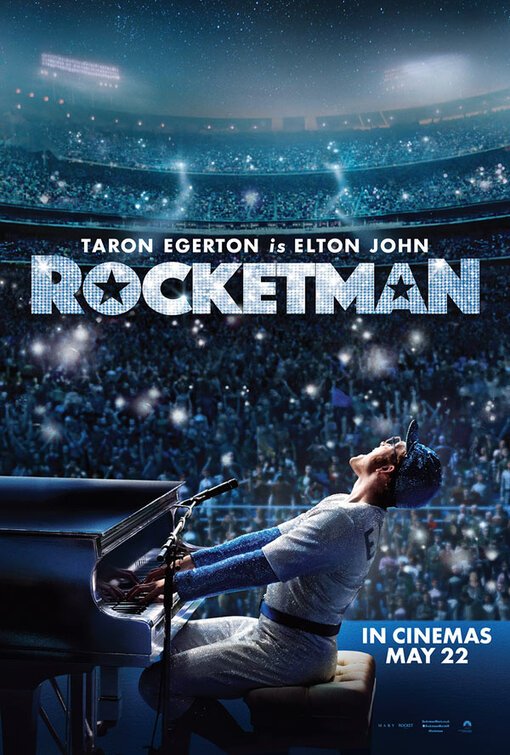 ROCKETMAN is the story of rock music legend Elton John’s sad childhood and rise to fame mired by drug and sex addiction, including his battle to overcome those problems and achieve happiness. As a child, Elton suffers from an emotionally distant father and a mother who sometimes is verbally cruel. Salvation for Elton comes in the form of music, as young Reginald is seen playing classical masterpieces by ear from age five. Elton’s friendship with his lyricist Bernie Taupin gives Elton confidence. However, Elton is continually rejected by his parents despite his success and falls into a horrible cocaine and alcohol addiction.

Dazzling musical numbers and a compelling performance by Taron Edgerton as Elton John keep ROCKETMAN flying smoothly. However, the R-rated movie has lots of foul language and a mixed worldview. Strong Romantic and pro-homosexual elements are combined with some strong moral content showing the dangers of substance abuse and proving that money can’t buy happiness. ROCKETMAN preaches tolerance and acceptance of homosexual sin, but also rebukes a hedonistic lifestyle full of substance abuse and of trying to buy love and happiness.

(PaPa, RoRo, BB, C, PCPCPC, HoHoHo, LLL, V, SS, NN, AA, DD, MM):
Dominant Worldview and Other Worldview Content/Elements:
Strong mixed pagan worldview with some Romantic elements about seeking emotional comfort and personal identity mixed with strong moral elements showing money can’t buy you happiness, homosexual lead character who writes music finds brotherly love with his heterosexual musical partner, who writes the lyrics for their songs, and movie shows the dangers of hedonism and substance abuse that can come from such hedonism, and there’s a redemptive moment where character forgives people who hurt him, but movie takes a very strong politically correct pro-homosexual stance as it shows some homosexual bedroom scenes and says that eventually Elton John finds happiness when he finds a male lover who treats him better, and he “marries” the man (contrary to the movie, the Bible says homosexuality is a perversion of love that represents an rebellion against God, His moral law and His divine plan for men and women)
Foul Language:
At least 53 obscenities (mostly “f” words), two GDs, and three light profanities
Violence:
Elton is slapped hard on the face once by his homosexual “boyfriend”
Sex:
Strong and light sexual content and sexual immorality includes two men kiss passionately before laughingly taking their clothes off, each of themselves, in bed, one man rolls atop the other and kisses him before the camera cuts away, next scene is the two men holding each other in bed, and it’s implied they are nude under the covers, the same men later kiss passionately in a closet with the implication they’re about to engage in homosexual acts, implied homosexual oral sex as man zips his pants up, musical fantasy dance sequence shows Elton John overlooking a symbolic orgy where dozens of barely clothed men and women dance and writhe around on a floor in suggestive ways before Elton falls on his back atop them, two clothed men in fantasy dance scene kiss Elton on his neck from either side, and a third man briefly has his head near Elton’s groin, orgy scene is portrayed very bleak and negative and leads to Elton being raced to a hospital in an ambulance from a drug overdose, woman is seen having foreplay with a man she’s not married to while her horrified young son sees her, a man surprises Elton by kissing him on the lips and later forces Elton to admit being homosexual to his best friend
Nudity:
Upper male nudity and implied full male nudity in one male homosexual sex scene
Alcohol Use:
Social drinking of alcohol in many scenes, and Elton John is seen drunk several times with his best friend (at first the drunkenness is happy carousing but later turns into a sad addiction that demands rehab)
Smoking and/or Drug Use and Abuse:
Elton is seen snorting cocaine several times, he says he’s tried “every drug known to man,” and he eventually winds up a hopeless addict who must go to rehab to save his life; and,
Miscellaneous Immorality:
Strong miscellaneous immorality includes dysfunctional family members don’t get along, man dresses up in a devil’s costume, but the costume is seen as ironic because he’s going to rehab for substance abuse at the time, Elton’s distant father breaks his heart repeatedly throughout childhood, Elton’s mother sometimes is verbally cruel toward him, and Elton himself winds up having temper tantrums as an adult toward others.

ROCKETMAN is the story of rock music legend Elton John’s sad childhood and rise to worldwide fame mired by drug and sex addiction and his battle to overcome those problems and achieve happiness until he finally decides to be a homosexual. Dazzling musical numbers and a compelling performance by Taron Edgerton as Elton keep ROCKETMAN flying smoothly, but the R-rated movie has lots of foul language and a mixed worldview with strong Romantic and pro-homosexual elements combined with some strong moral content showing the dangers of substance abuse and proving that money can’t buy happiness.

The movie opens with the stunning visual of a bloated, middle-aged Elton John (Taron Egerton) wearing an elaborate red devil costume with horns on his head and feathered wings. Writer Pete Bell and director Dexter Fletcher (who took over the troubled production of BOHEMIAN RHAPSODY, another biopic of a homosexual rock star, Freddie Mercury) aren’t setting up a Satanic celebration, however. Rather, Elton is entering an Alcoholics Anonymous meeting, and his devil costume is a symbol of how corrupted he feels inside. Elton openly admits he’s a sex addict, drug addict and alcoholic. Moments later, he sees a vision of himself as a 5-year-old boy (with his birth name of Reginald Dwight). Reginald starts singing one of his classic pop songs, while the adult Elton John busts out of the meeting with his fellow addicts and group leader running behind, dancing through the streets of his childhood.

This dazzling opening has the silly charm and rock and roll energy of the classic musical GREASE, and it establishes quickly that this will be no ordinary biopic. Bell and Fletcher have conceived a musical fantasy style for the movie, which bounces back and forth between the anguished confessions Elton makes in his group meeting and the various periods of his childhood and his adult rise to fame.

The movie’s core emotional impact lies in Elton’s quest for love. This is heartbreakingly shown when Elton’s 10-year-old self sings his late-period ballad “I Want Love” after his emotionally distant father tells him not to tap his fingers on the family dinner table. In a brilliant move, each family member (including his father, his condescending and careless mother, and his saintly grandmother) sings a verse, revealing the inner pain that made them turn out the way they are.

Salvation for Elton John comes in the form of music, as young Reginald is seen playing classical masterpieces by ear from age five, with his grandma encouraging his artistry all the way to receiving a scholarship from the Royal Academy of Music. As he learns to properly compose, he’s told by a record executive that he should put lyrics to his beautiful tunes, but Elton can’t think of anything to say. So, the exec hands him an envelope of songwriter Bernie Taupin’s lyrics and tells him try to write music for them. Thus, a 50-year magical partnership is born, with the heterosexual Bernie (Jamie Bell) providing the platonic love and acceptance that Reginald (who renames himself Elton John after a bandmate named Elton and John Lennon) never had before.

Elton’s friendship with Bernie gives Elton newfound confidence. Soon, they are on a rapid rise to worldwide fame and fortune. However, Elton finds that material wealth doesn’t bring happiness, as he can’t seem to find a strong relationship while his fellow homosexual manager (Richard Madden) lures him into an affair that’s manipulative and shallow.

Elton’s path to sobriety and at least a worldly sense of redemption in ROCKETMAN is an affecting one. It gives the movie a surprisingly moral tone in spite of its homosexuality and other excesses. The movie makes it very clear that promiscuity and substance abuse rendered Elton an extremely unhappy man, and that he had to learn to forgive his parents in order to ever be emotionally healthy.

Despite some media hype that ROCKETMAN would actually show a homosexual sex scene rather than implying such activity the way BOHEMIAN RHAPSODY did to earn a PG-13 rather than R rating, the movie has one main such scene that cuts away as soon as Elton and his manager fall into bed together after some passionate kissing. No nudity other than bare chests and backs are shown, and one other scene cuts away as they kiss passionately in a closet. The scenes aren’t as explicit as has been advertised, but they are offensive enough.

What’s remarkable about the movie’s depiction of Elton John’s homosexual lifestyle is that it shows that, when engaged in promiscuity, or the relationship where his manager cheats on him and emotionally abuses him, he’s anything but “gay” or happy. The movie also has an extremely negative depiction of Elton’s drug and alcohol abuse. So, ROCKETMAN actually has a fairly traditional moral stance with this extreme subject matter.

The end credits do, however, update viewers on Elton John’s life over the past 30 years since he became sober. Thus, Elton is shown having “married” a man named David Furnish 25 years ago and now having twin sons born through a surrogate. The writing on the screen says Elton’s “finally loved – properly,” a reference to his mother earlier telling him that his lifestyle would ensure that he would “never be loved properly.” Thus, the movie does accept and condone his current homosexual lifestyle, but that shouldn’t come as a surprise considering that Elton John himself is an executive producer on ROCKETMAN.

As Elton, Taron Egerton (THE KINGSMAN movies) does a phenomenal job, setting himself up for an Oscar to match the one given to actor Rami Malek for his portrayal of Freddie Mercury in BOHEMIAN RHAPSODY. Egerton’s performance is an emotional rollercoaster of extreme highs and lows, but always underpinned by a heartbreaking wish for true acceptance and love.

Jamie Bell as Bernie Taupin is also outstanding, and the movie’s depiction of their friendship is an excellent example of brotherly love that stands true through a myriad of crises. With 20 of Elton John’s greatest hits used in endlessly inventive musical numbers, ROCKETMAN is undeniably entertaining through much of its running time, whatever the movie’s moral flaws.

So, despite the movie’s dazzling musical numbers and the lead performances, ROCKETMAN has lots of strong foul language and a mixed worldview. Strong Romantic and pro-homosexual elements are combined with some strong moral content. ROCKETMAN preaches tolerance and acceptance of homosexual sin, but also shows the dangers of substance abuse and of trying to buy love and happiness.