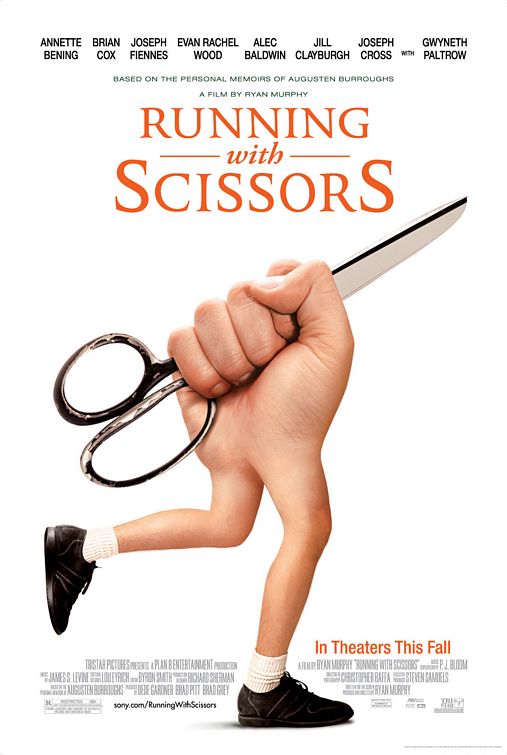 RUNNING WITH SCISSORS is a coming-of-age tale based on the autobiographical memoirs of homosexual author Augusten Burroughs. Augusten’s crazy mother Deirdre is a struggling poet. Augusten's father, Norman, is an alcoholic. His parents get into terrible fights. Deirdre, a manic depressive, forces Norman to go to marriage counseling with a pompous, certifiably mad, psychotherapist, Dr. Finch. Deirdre divorces Norman. Dr. Finch convinces Deirdre to let him become Augusten’s guardian. The decision devastates 13-year-old Augusten, who tries to cope as he can. No one is normal in Dr. Finch’s own family. Augusten gets sexually involved with Neil Bookman, a 30-year-old patient of Dr. Finch's who lives in the garage out back.

RUNNING WITH SCISSORS tells an incredibly sad tale. The movie is not overtly politically correct, but it avoids making any moral judgments against the pedophile relationship between Augusten and Neil, or Augusten’s homosexual inclinations. It does appear to make moral judgments about Augusten’s crazy feminist mother and Dr. Finch’s manipulation of his patients for personal gain. The broad moviegoing audience most likely will be turned off by this quirky comedy with its lack of moral outrage about bizarre, immoral behavior.

(H, RoRoRo, PaPaPa, HoHo, B, Ab, LLL, VV, SS, N, AA, DD, MMM) Light humanist worldview with very strong Romantic and pagan characters who follow their quirky or immoral feelings, including into adultery, homosexuality, pedophilia, fraud, and larceny, but movie does make some moral points against feminists full of rage and in favor of parents giving direction and moral stability to impressionable children, to the point of showing what kinds of chaos and immorality can occur when you don’t provide solid guidelines, plus two or three ungodly moments when insane man mentions God at one point in an offensive manner and family misuses Bible by dipping their fingers onto a passage and coming up with crazy rationalizations to make decisions that having little or nothing to do with the passages they arbitrarily pick out; at least 50 obscenities, eight strong profanities, six light profanities, and references to feces, including one scene where blasphemy occurs; some strong violent content (much of it in a satirical tone), including talk about suicide, psychiatrist fakes suicide with young teenage boy so boy can play hooky from school, people full of rage, teenagers poke hole in kitchen ceiling, man almost stabs another man in his sleep, and two men grab insane woman to put her into the loony bin, references to shock therapy, and woman entraps pet cat and lets it starve to death, woman makes joke about eating dead cat, and man angrily charges his wife but bangs his body against stove and/or cupboard and then falls down unconscious with head bleeding (eventually he regains consciousness); strong but not very graphic sexual content includes depicted lesbian kissing, implied homosexual sodomy, thirtysomething pedophile has implied sex with 13- or 14-year-old boy and they become homosexual partners (boy later concludes man is just using him, but boy still feels loss when man goes away for good), older man lies in bed with young teenager; upper male nudity; alcohol use and drunkenness; smoking, psychotherapist haphazardly gives pills to his patients, therapist drugs one patient to manipulate her and adopt her son, and psychologist fakes teenager’s suicide by giving him pills so that teenager won’t have to attend school; and, very strong miscellaneous immorality such as mentally ill mother abandons son after her divorce with his father, father refuses to talk with son after father divorces son’s mother, larceny, fraud, autocratic psychotherapist makes arbitrary decisions and arbitrary statements, skipping school, and bad parenting rebuked.

RUNNING WITH SCISSORS is a coming-of-age tale based on the autobiographical memoirs of homosexual author Augusten Burroughs. Like the book, the movie minimizes the dark side of Augusten’s terrible childhood, including his relationship with a thirtysomething pedophile being treated by Augusten’s insane guardian, a wacky psychotherapist. The events in the book apparently have been compressed.

The movie opens with Augusten’s crazy mother using him as an audience for one of her poems. Deirdre desperately wants to become a famous poet, but the goal always eludes her. Augusten’s father, Norman, is an alcoholic, and his parents get into terrible fights. Deirdre, a manic depressive, forces Norman to go to marriage counseling with a pompous, but certifiable, psychotherapist, Dr. Finch. Dr. Finch drives Norman away by making impossible demands on the couple. He says they need five hours a day of counseling.

After she divorces Norman, Deirdre goes to Finch’s Victorian house for her analysis, because Dr. Finch has had to give up his office due to tax problems. She drags Augusten, now about 13, along. The inside of the house is almost a total mess. Everyone in it seems crazy, including Dr. Finch’s two daughters, Hope and Natalie, and his mousy wife, Agnes.

Suddenly, it becomes clear that Dr. Finch has drugged Deirdre into a stupor. He convinces her to let him adopt Augusten so she can live her own life. The decision devastates Augusten, who tries to cope as best he can. One of the ways he copes is by getting sexually involved with Neil Bookman, a 30-year-old patient of Dr. Finch’s who lives in the garage out back. Further adventures with the Finch family, Neil and his mother follow.

RUNNING WITH SCISSORS tells an incredibly sad tale. At one point, Augusten yells desperately that he’d like to have a normal life, with rules and boundaries, and normal parents. This is a major positive message in the movie, but it gets lost because of the movie’s satirical, comic tone. Adding to this tone are popular, upbeat rock tunes and ballads, including a couple songs sung by Nat King Cole, played loudly. Ultimately, though the movie might deserve some points for trying something new, the story and characters don’t quite work as a whole. The characters, situations and tone are just too bizarre, though often entertaining and sometimes absorbing. Also, Augusten is too much of a blank slate and too young and powerless to compel viewer interest. It seems a disservice to his agony to make so many of the movie’s scenes so flippant and hip. Despite this, several sequences and many acting moments stand out in the movie.

RUNNING WITH SCISSORS is not in-your-face politically correct. For example, Augusten’s mother comes across as a shrill feminist with almost insurmountable psychological, moral and spiritual problems. Even so, the movie avoids making any moral judgments against the pedophile relationship between Augusten and Neil, or Augusten’s homosexual inclinations. Yet, it does seem to make moral judgments against Augusten’s mother and Dr. Finch’s manipulation of his patients for personal gain. Although Augusten apparently was indeed sexually abused repeatedly as a young boy by an older man, there is no excuse not to treat such abuse in anything other than utter contempt.

Be that as it may, the broad moviegoing audience most likely will be turned off by this quirky comedy with its lack of moral outrage about the bizarre, immoral behavior of these characters.