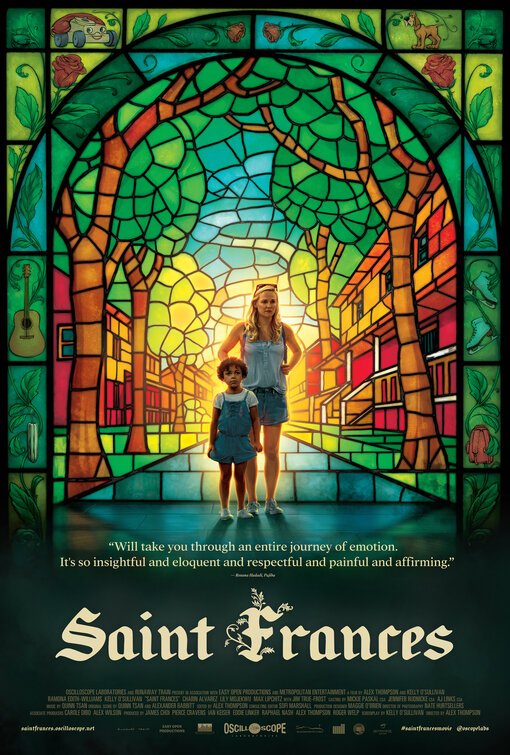 SAINT FRANCES follows a 34-year-old waitress, Bridget, who doesn’t know what to do with her life. Bridget meets Jace. The two hit it off and go back to her apartment to hook up. This interaction ends up backfiring when Bridget becomes pregnant and ends up getting an abortion. While all this is happening, Bridget gets a summer job as a nanny for a lesbian couple, where she forms an unlikely friendship with 6-year-old Frances who challenges her.

SAINT FRANCES is well made but too long and slow. Many scenes could be deleted or reduced to make the movie flow better. Also, the ending leaves viewers hanging and is unsatisfying. The movie has some positive elements. For example, little Frances is seen praying, caring for her new brother and being taught how to respect others even when you disagree with them. Also, friendship and loving and supporting your family are also extolled. However, SAINT FRANCES has a strong, somewhat mixed pagan, politically correct worldview with strong feminist, pro-abortion, homosexual elements. Finally, SAINT FRANCES has an excessive number of gratuitous obscenities, including some “f” words.

(PaPaPa, PCPC, FeFe, HoHo, C, BB, E, LLL, VV, SS, N, A, MM):
Dominant Worldview and Other Worldview Content/Elements:
Very strong, somewhat mixed pagan, politically correct worldview with strong feminist, pro-abortion, pro-homosexual content where female lead character says it’s not her job to take birth control and that men should wear a condom instead, lead character talks about her unborn child only being a sack of cells and not a child, lead character eventually has an abortion, lead character becomes the nanny for the daughter of a lesbian couple, with some Christian elements where one pregnant lesbian woman is Catholic, baptizes her newborn son, and talks about praying to the Virgin Mary, but sides with her nanny’s decision to abort her own child, with images of crosses, a Catholic photo in a home, a random car has a sticker saying “Unborn lives matter,” a billboard has a “Hell is real” sign, prayer depicted twice, plus some strong moral elements where child is seen apologizing, nanny shows compassion for young girl, young girl cares for new sibling, friendship is extolled, child is taught it’s okay to disagree but still to respect other people, and supporting and loving your family are extolled, and a young girl expresses compassion for the environment
Foul Language:
32 obscenities (mostly “f” and “s” words), five light profanities, some potty humor, you can hear a woman vomiting in one scene, and another scene shows a woman vomiting
Violence:
A young girl is accidently tossed out of a stroller but isn’t hurt, the same young girl accidently falls into a pond but isn’t hurt, the aftermath of an abortion is depicted with a woman bleeding a lot many times throughout the movie, a child plays with toy gun, and a man talks about a nightmare he had about committing suicide
Sex:
Woman has sex with two men who she claims not to be dating, she is also seen kissing these men multiple other times, a father kisses his daughter on the forehead lovingly
Nudity:
Two instances of upper male nudity, one scene with a man in his underwear, one scene with woman’s midriff showing, one scene where a woman is in the shower, but nothing is shown, and it’s implied a woman is breastfeeding in public
Alcohol Use:
Five instances of casual drinking, but no one is drunk
Smoking and/or Drug Use and Abuse:
No smoking or drugs; and,
Miscellaneous Immorality:
Conversation about lying, dysfunctional family depicted but is resolved, child displays bad behavior in the beginning but straightens up in the end, a conversation about divorce, a conversation is had about racism, black lives matter sign is in the front yard of a house, there’s a weird conversation between mother and daughter about would her daughter choose to be born if she could go back and choose, and a new mother develops Post-Partum Depression and has a rough time caring for her child.

SAINT FRANCES opens with Bridget at what looks like some sort of a gathering. While there, Bridget meets Jace. The two connect because they’re both waiters and aren’t sure where their lives are headed.

Upon meeting, they go back to Bridget’s house and hook up. The next morning, they find blood in the bed and on each other. Neither thought anything of it, but this interaction between the two will have consequences. Bridget remembers at the last second, she has an interview for a potential job and has to rush off to make it on time.

When Bridget arrives, she’s greeted by two lesbian mothers, Maya and Annie. Maya is pregnant with their second child, and they need someone to help out for the summer with their 6-year-old daughter Frances, who they call Franny. Franny and Bridget don’t hit it off, so Bridget doesn’t get the job. However, a few weeks into the summer, the moms call her and end up hiring her because their first choice didn’t work out.

Right after Bridget starts the nanny job, she finds out she’s pregnant. Without question, she tells the father, Jace, she’s going to have an abortion. Jace doesn’t try to talk her out of it, but rather says he will help pay for it and go with her when she has the baby aborted.

During this process, Bridget has a strained relationship with Franny. Franny doesn’t really trust or get along with her yet, so gives Bridget a rough time. As the summer continues, the two start taking different activity classes and spending more time together. Bridget also continues to experience the side-effects of her abortion, which consists of vomiting and bleeding a lot.

Bridget tries to stay connected to Jace, the father of her murdered child. However, it doesn’t work out, because they fight too much, and Jace wants to talk about the feelings he has about the child she aborted.

Bridget begins to spend more and more time with Franny and Maya, because Maya is experiencing Post-Partum Depression. The sickness puts a rift into Maya and Annie’s marriage, putting Bridget in a bad spot. Will the two work it out so Bridget can still have a good relationship with them and Fanny?

SAINT FRANCES is well made but is too long and slow. Many scenes could be deleted or reduced to make the movie flow better. The movie’s best part is little Franny. She is smart, funny, intuitive, caring, and almost carries the entire movie. However, the movie’s ending isn’t satisfying and leaves the audience wanting to know what happens to Bridget.

SAINT FRANCES has some positive elements pertaining to a child who prays and is taught the value of respect. Also, Maya is a Catholic who baptizes her new son and talks about praying. However, there are major worldview problems consisting of strong feminism, homosexuality, anti-Christian content mixed with strong Biblical and Christian content. For all these reasons and extreme foul language and miscellaneous immorality Movieguide® finds SAINT FRANCES abhorrent.