SHOW ME THE FATHER

"God Can Turn a Mess into a Miracle" 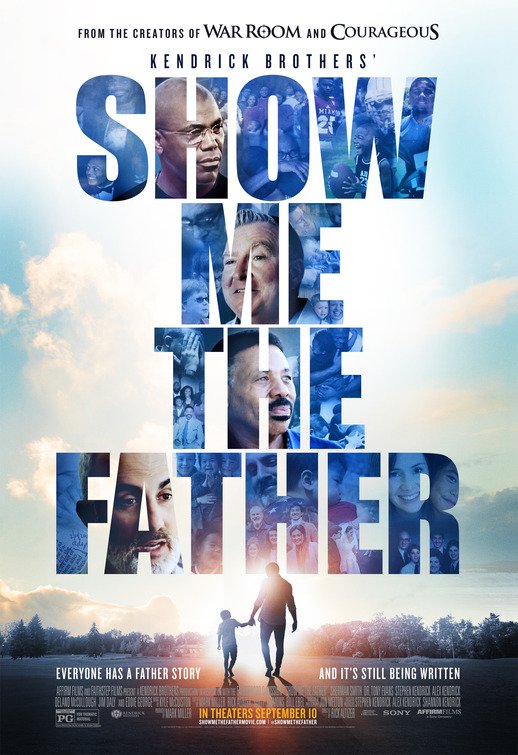 SHOW ME THE FATHER is a wonderful, inspiring documentary. It tells six emotionally powerful stories about fatherhood. Four stories involve two football coaches who mentor four young men from broken families to become better men and better fathers. Another story tells how God performs a miracle in helping a man and his wife find the perfect daughter to adopt. A sixth story shows how an older man overcomes a serious bout with depression to bless his own three sons.

SHOW ME THE FATHER is a must-see movie. It will brighten your day and inspire you. The filmmakers let the people involved tell their stories. It intercuts these segments with great visual aids and archival footage that move the story along. The emotionally powerful stories ultimately lead to three great heartwarming, surprising twists. SHOW ME THE FATHER has a strong Christian, biblical worldview, with many great biblical references. Just as good, if not better, the movie overtly stresses that Jesus Christ is the visible image of God the Father. As Jesus says in John 14:7, “Anyone who has seen Me has seen the Father.”

(CCC, BBB, V, AA, M):
Dominant Worldview and Other Worldview Content/Elements:
Very strong, evangelistic, profound, Christian, biblical, morally and spiritually uplifting worldview, with mane references to God, Jesus, prayer, and the Bible, but not at all preachy or dull
Foul Language:
No foul language
Violence:
No depicted violence, some football blocking in game footage, man relates story how his alcoholic father told him he was going to kill his mother when she came home, some talk about abusive fathers, and some references to deaths in families
Sex:
No sex, but a story is related how a 16-year-old girl gave up her baby for adoption without telling the father
Nudity:
No nudity
Alcohol Use:
Some discussion about fathers who had drinking problems
Smoking and/or Drug Use and Abuse:
No smoking or drugs; and,
Miscellaneous Immorality:
Light references to some families and children being abandoned by their fathers.

SHOW ME THE FATHER is a wonderful, inspiring documentary about six different emotionally powerful stories about fatherhood, with three great twists that will leave viewers amazed by the miraculous power of God. SHOW ME THE FATHER is filled with strong biblical references showing, among other things, how Jesus Christ models for us the pattern of fatherhood that God the Father has toward us.

The movie relates the story of how a football coach, because of how well his own father treated him, makes it a point of behaving like a father to all the players under him. It focuses on the stories of three different players whose lives are changed by this coach’s positive, compassionate Christian attitude. The coach says he wants to do more than just teach the players football fundamentals. He also wants to make a difference in their lives.

A fifth story shows how God performed a miracle to help a man and his wife find the perfect daughter to adopt.

A sixth story shows how one man suffers a heavy bout with depression after receiving a bad medical prognosis but decides to strengthen his personal faith in Jesus Christ and apply the lessons he’s learned from God and the Bible to bless the lives of his own three sons in a powerful way that brings their family and friends to tears.

SHOW ME THE FATHER lets the people involved in these six situations tell their stories, intercut with good visual aids and archival footage that move the story along. The men also comment on what they learned from their encounters with God. The movie also inserts clips of Dr. Tony Evans, founder and senior pastor of Oak Cliff Bible Fellowship in Dallas, giving profound Bible-centered comments about God, fatherhood and the Gospel of Jesus Christ. There are also a few uplifting interviews with and comments from some family members, including the three sons in the sixth story. Eventually, the emotionally powerful stories lead to three great heartwarming, surprising twists in the movie’s second half that show the power of God the Father to transform lives and turn the messes that human beings make into miracles and blessings.

SHOW ME THE FATHER has a strong Christian, biblical worldview. The Gospel of Jesus Christ is clearly preached. The filmmakers and storytellers also insert many biblical citations and themes. Just as good, if not better, the movie overtly stresses that Jesus Christ became the visible image of God the Father on Earth. As Jesus says in John 14:7, “Anyone who has seen Me has seen the Father.” Just as Jesus mirrors the image of God the Father, so men should mirror Christ’s image to their children, Dr. Evans advises.

During the movie, Dr. Evans says everyone has a fatherhood story. Whether you have a sad story or a happy story, you can always turn to Jesus Christ, who will gladly show you God the Father and lead you to the many blessings the Triune God has in store for you. Whoever turns to Jesus and follows Him is destined to be adopted to sonship and fellowship with God (Ephesians 1:1-6). As one person says in SHOW ME THE FATHER, “If you don’t have a Dad, God is standing there for you.” God can turn a mess into a miracle.

“See what great love the Father has lavished on us, that we should be called children of God! And that is what we are!”

Watch SHOW ME THE FATHER: