"Depraved Movie Lives Up to Its Title" 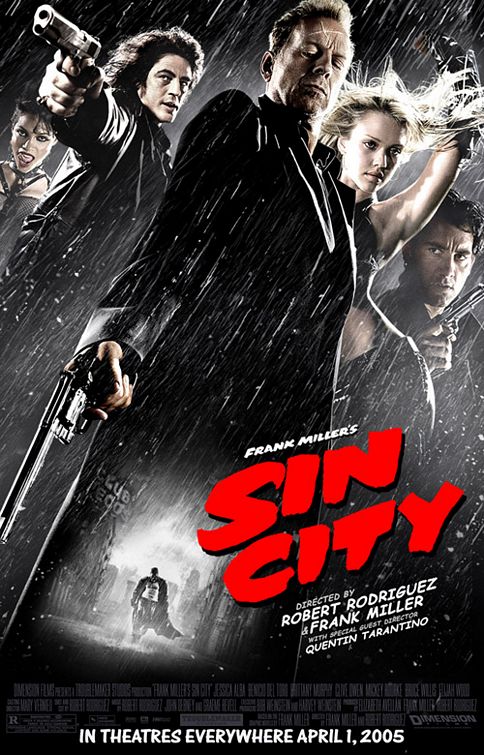 SIN CITY is a different breed of comic book movie. There are no flashy costumes, no Batmobile, and no hero. Instead of triumph, there is an endless barrage of evil acts and hedonism. Three stories weave together: a retiring cop risks his life to stop a pedophile, a mutant goes looking for revenge but uncovers a huge conspiracy, and a violent man teams with prostitutes to hide a policeman’s murder. Even the good guys are horrifically violent, and the bad guys are revolting. The evil in this movie, which is shot in black and white with splashes of color, is shocking.

Filmmaking virtuosity aside, SIN CITY has a sociopathic thirst for violence and contains a cynical, extremely hostile view of religion. Also disturbing is the movie’s philosophy that each man is utterly alone and pitted against the rest of society. That is the lie of Romantic individualism. The Bible tells us that we are part of the body of Christ and, consequently, we should exist in communities. The dangerous individualism of SIN CITY teaches us that we cannot trust man, and it results in the amorality and paranoid violence exhibited in the movie.

(PaPaPa, RoRoRo, AbAb, B, LLL, VVV, SSS, NN, AA, DD, MMM) Pervasive pagan moral worldview with murder, revenge, corruption, and prostitution, and strong Romantic philosophy that pits the individual against an evil society, as well as anti-Christian content includes two corrupt or evil priests, both of whom are murdered (one inside a confessional), and light moral element man risks life to stop a pedophile and end governmental corruption; 33 obscenities, but no ‘f’ words, and eight strong profanities; gory, bloody violence includes many people being fatally shot with some body parts flying off, man dragged from car, crooked priest shot in confessional, people hit in head with sledgehammers and hatchets, men impaled, decapitations with a head that is bandied like a ball, cannibal keeps decapitated heads on his wall, dog eats at dead person, corpses are cut into pieces so they can be dumped, murderer is electrocuted by the state, gun backfires and becomes lodged in man’s head, pedophile’s genitalia is pulled off, suicide, man almost hanged, woman lashed, grenade explodes, people punched, man jumps through windshield, people smashed into wall, and men’s heads are held in toilet bowls; fornication depicted, pedophile kidnaps a girl but is prevented from harming her, many characters are prostitutes, and reference to priests using hookers; upper and rear female nudity; heavy alcohol use; prescription drug abuse and smoking; and, heavy governmental corruption, heavy corruption in the Catholic Church, cannibalism, pedophilia, revenge, and kidnapping.

SIN CITY is a different breed of comic book movie. There are no flashy costumes, there’s no Batmobile, and there is no hero. Instead of triumph, there is an endless barrage of evil acts and anti-biblical hedonism.

The movie is broken up into three parts which weave together loosely. Bruce Willis is John Hartigan, the only character who could be confused for a hero. Just before quitting the police force, he risks his life to stop a powerful man from molesting and murdering young girls. He succeeds in saving the girl, but he is framed for the crime and thrown into prison. The almost-victim never forgets his bravery and writes to him every week for twenty years. When he is released, he has to save her life again.

Marv is a disfigured mutant with a bad temper played, with lots of makeup and prosthetics, by Mickey Rourke. A beautiful woman named Goldie seems to be suddenly in love with him, then after one night of passion, she is murdered in his bed. Marv canvases the city to find out who killed Goldie. When he finds out, he unfolds a huge conspiracy that involves the government and the Catholic Church.

Lastly, Clive Owen’s character Dwight has to defend his girlfriend (Brittany Murphy) from her abusive and potentially insane ex-boyfriend Jack Rafferty (Benecio Del Toro). Dwight chases Jack all the way to Old Towne, which is policed by outlaws and a gang of hard-fighting prostitutes. After Jack pushes his luck and gets killed, Dwight realizes that Jack was a cop, and now he and the prostitutes have to hide the murder.

Already, then, SIN CITY seems depraved, but the truth is more extreme. Even an essentially good intentioned character like Bruce Willis’s John Hartigan uses sadistic and horrifically violent methods to fight the bad guys. Marv, who is out for revenge, not justice, drags a man from his car and shoots a corrupt, lying priest inside the confessional. This betrays not only a sociopathic thirst for violence from the filmmakers, but a cynical, extremely hostile view of religion. The bad guys are even worse, the highlight of which is Elijah Wood as a demon-like cannibal.

Perhaps more disturbing than the violence is the line of thought that undergirds this movie, that each man is utterly alone and therefore pitted against the rest of society. That is the lie of Romantic individualism. The Bible tells us that we are all part of the body of Christ and, by extension that we should exist in communities. As adopted sons of God, we are not individuals in the Romantic sense, but actual members of a family network. The dangerous individualism of SIN CITY teaches us that we cannot trust any man, which results in the amorality and paranoid violence exhibited in the movie.

On a craft level, SIN CITY is fairly accomplished. The black and white cinematography, with little splashes of color, is engrossing and truly succeeds in creating an alternate world for the audience. The three stories are stitched together very similarly to the three episodes in PULP FICTION, with some characters reappearing and a twisted chronology,

and the maneuver is again effective. It adds some complexity to the otherwise straightforward plot.

Although the dialogue is intentionally stilted, to ape film noir, the actors do some exceptional jobs bringing humanity and realism to their characters. Bruce Willis is especially good. His Detective Hartigan is not a cardboard cut-out but a real person struggling to do what he thinks is right. For all the flack he takes, Willis is actually a convincing actor who’s often very fun to watch. Most of the performances are good, which speaks to the directors’ and actors’ seriousness about this movie.

Filmmaking virtuosity aside, SIN CITY is despicable. It glamorizes and justifies its violence and anti-social behaviors to a highly successful degree. It is important that we who are educated about the issues to not support vile-spewing movies like this one.