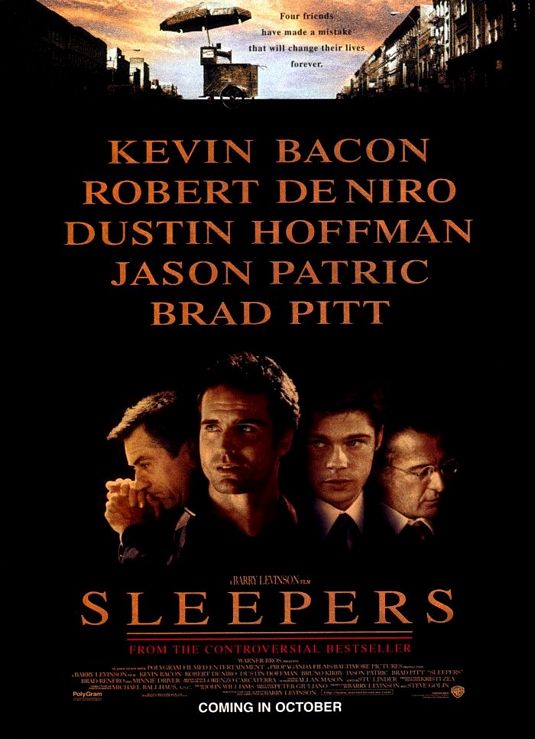 SLEEPERS is a violent movie about four boys who were raped and victimized in a reform school in the late 1960s. As adults, the boys find a way where they can exact revenge on their abuser. Thought-provoking and with a mild Christian worldview, it is a movie for adults only since it also has excessive amounts of obscenities and profanities as well as a priest who lies to save his friends.

Sleepers is a slang term for a boy who spends more than nine months in reform school. It also is the name of a complex movie about friendship, devotion and brutality. In the late 1960s in Hell’s Kitchen, New York, a group of boys play pranks, lay about and serve the Catholic Church under their friend Father Bobby. The boys are Lorenzo , Michael, John, and Tommy. One day, the boys steal a hot dog cart and are sent to the Wilkinson Home For Boys, a house filled with torture, abuse and even rape from the guards. As adults, the boys find a way to exact revenge. Yet, the justice system, a defense attorney and Father Bobby stand in their way towards retribution.

SLEEPERS is well produced in every category, except editing. It has fine performances by Bacon, Hoffman, Pitt, and especially Jason Patric. It has a very involved and honest script that lets the actors talk out complicated issues. Regrettably, this movie has many obscenities, implied rape and lots of murder and brutality. Like A TIME TO KILL, where the defendant(s) committed a crime that seems to be justified because the victim previously abused innocent people, it will challenge you to think about ideas of justice.