"Clever and Witty, But Slightly Marred" 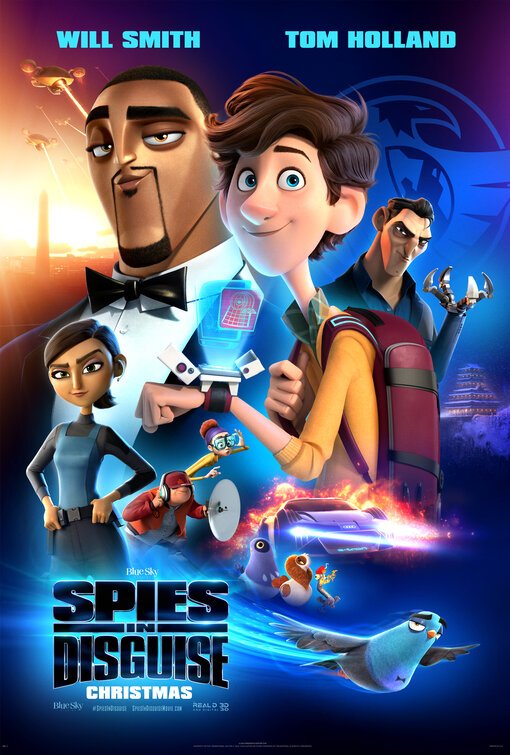 SPIES IN DISGUISE is an animated movie. It follows Lance Sterling, an egotistical secret agent who fights bad guys for the United States government. Lance gets turned into a pigeon by Walter, a scientist. This makes Lance’s job harder. Matters are made worse when a villain named Robo Hand disguises himself as Lance and puts Lance’s reputation in jeopardy! With the help of Walter, Lance sets out to clear his name and right all wrongs.

SPIES IN DISGUISE is clever and witty, with exciting action and well-written dialogue. It’s got a light moral, redemptive worldview stressing helping others, stopping evil and sacrifice. However, it strikes a politically correct, pacifist tone about using weapons to fight evil. The geeky scientist guy believes that, by not using deadly force, people can come together, solve problems and stop evil without causing much harm. Also, the secret agent turns out to have been turned into a female bird, although he gets changed back into his normal self. MOVIEGUIDE® advises caution for pre-teen children for the above issues, brief potty humor and animated action violence in SPIES IN DISGUISE.

(B, C, PC, VV, N, A, M):
Dominant Worldview and Other Worldview Content/Elements:
Light moral, redemptive worldview stressing friendship, helping others and sacrifice for others, with some light politically correct elements where a character believes “there’s a good way to stop the bad” and ultimately convinces the protagonist that it’s the best means to solve problems by peaceful means instead of using harmful weapons, and in one scene the male protagonist turns out to have been turned into a female bird, but gets changed back into his normal self
Foul Language:
Character says “my butt” and begins to say SOB but drifts off, a pigeon vomits, a character mentions the need to use a rectal thermometer, and potty humor where character urinates and falls into the toilet after
Violence:
Animated violence, characters appear with guns, characters fall off tall buildings, car chases, and fighting
Sex:
No sex, female pigeon character coos at a male pigeon, male kisses his other male friend on the cheek to thank him
Nudity:
Upper male nudity in a few scenes, male character’s rear shown, implied full male nudity but it’s not shown
Alcohol Use:
Characters drink martinis in a few scenes to mimic the James Bond stereotype, villains drink beer in a bar in one scene
Smoking and/or Drug Use and Abuse:
No smoking or drugs but characters occasionally get shot with a dart that knocks them out; and,
Miscellaneous Immorality:
Character has an extreme ego but ultimately transforms and realizes he’s become too proud and conceited about his accomplishments, and a character refers to someone as a “god of asphalt” for his driving skills.

SPIES IN DISGUISE begins 14 years in the past. A young boy, Walter Beckett, plays with his inventions as he tries to dazzle his mother, who’s a police officer. She encourages him that, one day, his inventions will make the world a better place.

Cut to Japan. Secret agent Lance Sterling fights bad guys, led by a villain named Killian aka Robo Hand, because he has a robotic left hand. Back at headquarters in D.C., Lance walks with pride from his latest mission only to find Walter, who’s now all grown up, working on some weird inventions. Lance proceeds to fire him, thinking Walter’s “help” is useless.

As Lance parades about, a fellow agent named Marcy accuses him of stealing the Agent Database. Lance runs out of the building, but he’s innocent! What’s happening?

Lance travels to Walter’s house in the suburbs of Virginia to ask for help with a disguise that will make him invisible. Accidentally, Lance drinks what he thinks is a glass of water only to learn that it’s actually a concoction that alters DNA. Lance becomes a talking pigeon because Walter used a feather from his pet pigeon Lovey to make it.

Dedicated to clear his name, Lance takes Walter to Mexico to see Robo Hand’s henchman who can give them more information. Yet, Marcy and her team are hot on their trail!

As Lance and Walter continue on their adventure, Lance becomes more accustomed to bird-life like flying, eating off the ground and other things of similar nature. At the same time though, Lance is dedicated to using weapons against their enemies while Walter wants to use his creative gadgets just to maim them, not causing lasting harm.

Events come to a head after Walter and Lance escape Marcy in Mexico and venture in a submarine to find Robo Hand. Walter finally concocts an antidote that will make Lance human again because he realizes he’s actually a female bird because of Lovey’s feathers and needs to switch one variable to put things back to normal.

Shortly after, Lance becomes human again but decides to finish the mission alone so that Walter won’t be in any more danger.

Will Lance finish his mission? What will happen with Walter and Marcy?

SPIES IN DISGUISE has clever, witty dialogue and some exciting, comical action. Will Smith and Tom Holland make for a dynamic duo, and older audiences will enjoy hearing country star Reba McIntire’s voice as the head of the secret agents.

SPIES IN DISGUISE shows a strong moral worldview with an emphasis on helping and sacrificing for others. However, the movie maintains a politically correct, somewhat pacifist tone when it comes to fighting evil with weapons. The protagonist asserts that “evil doesn’t care if you’re nice” while the supporting character believes that, by not using deadly force, people can come together, solve problems and fight evil without any harm being done. Media-wise viewers should also note that in one scene the male protagonist turns out to have been turned into a female bird, but eventually gets changed back into his normal self. MOVIEGUIDE® advises light caution for young and older pre-adolescent children because of the above issues, brief scatological humor, and the animated action violence in SPIES IN DISGUISE.

Rent or Buy SPIES IN DISGUISE: