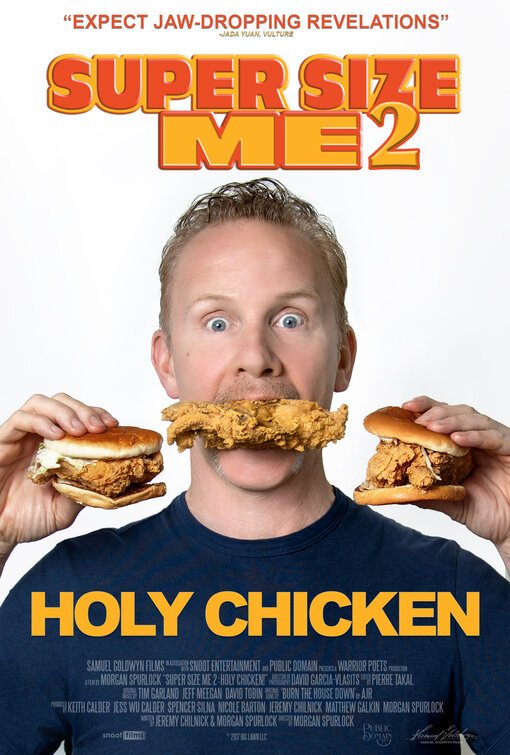 Morgan Spurlock’s documentary SUPER SIZE ME 2: HOLY CHICKEN! digs into the fast food chicken industry. To discover what’s happening, Spurlock opens up his own fast food chicken restaurant. He buys a chicken farm and baby chicks, works with a team to create a brand and menu, and begins serving the people of Columbus, Ohio. However, Spurlock’s restaurant tells customers the truth about what they’re eating, how the chickens were raised and how the farmers are getting the short-changed by the large companies and government bureaucracy running the industry.

SUPER SIZE ME 2 shines light on some business practices in the American chicken industry. For instance, it shows how the large chicken companies like Tyson collide with the state and federal governments to keep farmers in debt to the large companies, which sells baby chicks, feed and equipment to farmers. However, Morgan Spurlock uses a humanist, environmentalist, anti-capitalist perspective. In reality, the large socialist companies are stifling competition and damaging the free market, while giving government too much power. Thus, Spurlock’s analysis in SUPER SIZE ME 2 is incomplete.

(HH, B, AC, PCPC, EE, AcapAcap, B, LL, V, M):
Dominant Worldview and Other Worldview Content/Elements:
Strong humanist worldview but with a solid moral message about telling consumers and the public the truth about how the American chicken industry is being run, including the socialist monopolistic practices of the big chicken companies who collude with bureaucrats in the state and federal governments regulating the industry, thus stifling the free market and keeping farmers in debt to the big companies, plus movie condemns gluttony and the mistreatment of animals, in this case chickens, but the movie’s humanist worldview couches its crusade in a strong politically correct and strong environmentalist, anti-capitalist manner that actually undermines the main argument
Foul Language:
12 obscenities and profanities include one “GD” and two “f” words, plus a few uses of things like “Holy Cow”
Violence:
Some disturbing and bloody images including many dead chickens and shots of chickens being beheaded by assembly line type of machines, chickens are taken to a veterinarian for an autopsy and the chickens are shown being cut open as well as sticking a Qtip in their rear end to study
Sex:
No sexual content
Nudity:
No nudity
Alcohol Use:
No alcohol use
Smoking and/or Drug Use and Abuse:
No smoking or drug use; and,
Miscellaneous Immorality:
Examples of socialist government and corporation corruption throughout without any recourse or punishment, theme of greed as the companies who control the chicken industry are obviously controlling the farmers in order to make more money, and farmers have altered the way that chickens can properly grow to make more money faster.

SUPER SIZE ME 2: HOLY CHICKEN! is Morgan Spurlock’s follow up documentary to his first fast-food experiment where he only ate from McDonalds three times a day for a month. This time, he decides to open his very own chicken restaurant in the heart of the fast-food world, Columbus, Ohio. He wants to start from the very beginning and be able to tell the completely transparent truth to his customers.

First, he goes directly to the source: the chicken farmers. After many people refused to give him any type of inside look into this industry, he finally found a farmer who would help him out. This farmer is named Johnathan and has been in the chicken business for years, hoping to eventually pass it along to his son. Johnathan helps Morgan make a purchase of a few hundred baby chicks, and helps him get his barn set up to properly accommodate them.

This is when Morgan begins to learn about the FDA regulations for the way in which chickens are farmed. Even though these chickens are stuck inside a barn for the duration of their short lives, because there are no cages, they pass for “Cage Free.” As soon as he opens the door slightly, allowing the chickens to have about ten square feet of access to the outdoors, it counts as “Free Range.” The chickens have been bred over time to grow at a rapid rate, causing their legs to break underneath them and to have heart attacks because of their weight. However, because these problems are a result of breeding and not hormones, they can also advertise the chickens as “Hormone Free.”

While his chickens are growing, Morgan is also working with a team to find a building for his restaurant, a team creating the recipes, and a team working on the creative side of marketing. The marketing team points out that many restaurants have created ways where they put a “green halo” around their food, portraying items as healthy, when in reality, they are far from it. Morgan decides to use words like “crispy” and “tempura” instead of “fried,” and use bright green colors to give the impression of health.

After the help of many people, Holy Chicken finally opens its doors and the customers are surprised by what they find inside. Morgan has actually told the truth about the food that they are eating, including pictures of the overgrown and premature chickens on every table, and marks on the floor signifying the amount of space that qualifies his birds as “free-range” chickens. He also tells Johnathan’s story on a wall of the fast-food restaurant. There, people can read about how large chicken companies like Tyson and Pilgrim’s Pride allegedly are keeping small farmers under their thumbs and completely controlling their lives. For example, the big chicken companies provide the farmers with the baby chicks to raise, and the chicken feed for the chicks. Then, after a farmer pays off his debt for that, the large companies get the state and federal governments to change the regulations for chicken farming, such as new water regulations or new heating regulations for the birds, causing the farmers to remain in debt to the big companies.

During the documentary, Spurlock reveals that the National Chicken Council sent out a letter warning farmers about talking to Spurlock. Spurlock says that, as a result of helping him out, Jonathan has been exiled from the industry and has stopped receiving a new shipment of chickens. Hoping to change things for the better, Morgan Spurlock says he’d like to open more restaurants like the first one, spreading the truth about this industry.

SUPER SIZE ME 2: HOLY CHICKEN! reveals the many ways in which the average consumer is relatively blind when it comes to knowing the source for their food, what’s in it and whether it’s actually healthy or not. Using a few street interviews, Spurlock claims the eating habits of Americans are truly unhealthy, yet most people believe their habits are perfectly acceptable. Spurlock says human bodies are meant to be regenerating, as long as we put the correct items into it. Thus, for example, every single organ in the human body, including skin and the liver, replaces itself over time. If the body has only junk to replace itself with, the body will undoubtedly fail. Animals aren’t meant to grow at an unhealthy speed, Spurlock adds. He says the bodily failures the fast-growing chickens are having prove this point.

SUPER SIZE ME 2: HOLY CHICKEN! brings to light some chicken industry practices that give the industry a black eye. The problem with Morgan Spurlock’s approach, however, is that he comes to the issue from a humanist, environmentalist, anti-capitalist perspective. According to Spurlock, it’s the “corporate greed” of the big chicken companies in America that forces farmers to operate in a way that leaves them stuck in an unending cycle of debt. However, in reality, the big chicken companies are engaging in monopolistic practices, including colluding with government, to stifle competition. Thus, the big chicken companies, in cahoots with government, are actually violating the free market. So, while we may applaud Spurlock’s efforts to shine light on the chicken industry, his approach leaves something to be desired. You don’t have to be an anti-capitalist environmentalist wacko to bring reform to a flawed system. Capitalism is not the problem here. Big government and lack of competition are the real problems.

SUPER SIZE ME 2 also has some disturbing images and strong foul language.