"A Poignant Celebration of Grandparents" 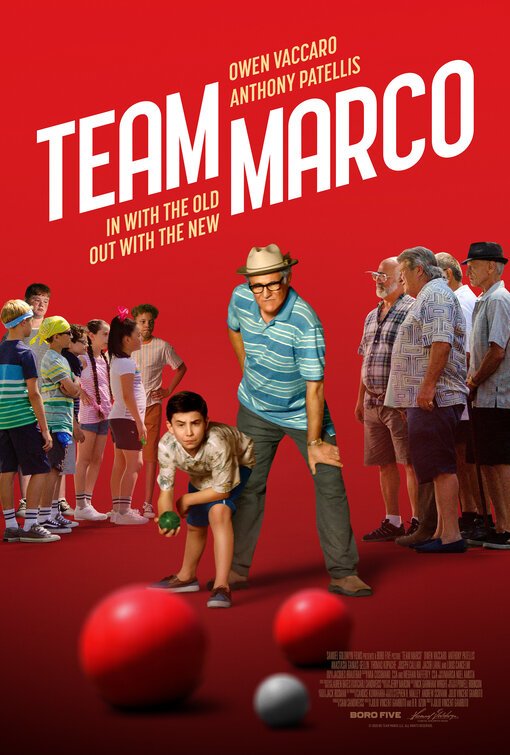 TEAM MARCO is an inspiring family drama from Samuel Goldwyn Films. The title character is a middle-school boy nearing age 12 who grows closer to his Italian grandfather one summer when his grandfather introduces him to his favorite game, the ancient lawn bowling game of bocce. At first, Marco and his widowed grandfather clash because Marco is obsessed with playing a video game designed by Marco’s father, who divorced Marco’s mother. Marco’s grandfather is also upset that Marco doesn’t have any friends and never goes outside to play. How can Marco’s grandfather change Marco’s bad habits and bad attitude?

TEAM MARCO is a funny, poignant movie, with a strong morally uplifting worldview celebrating family and the importance of grandparents. The movie also celebrates the proper training of children by their parents and grandparents. There are lot of joyful moments in TEAM MARCO, but there are also some heartrending moments. On the downside, TEAM MARCO has two strong profanities taking the Lord’s name in vain, a couple obscenities and some light profanities. The movie also contains some references to death and dying. So, MOVIEGUIDE® advises extreme caution.

(BBB, C, Ro, L, V, N, D, M):
Dominant Worldview and Other Worldview Content/Elements:
Very strong moral worldview with some light Christian, redemptive references to church and Christian crosses and a Virgin Mary statue and an explicit scene promoting repentance and forgiveness, with celebrations of family, the importance of grandparents, friendship (man tells his grandson, “Life is nothing without friends”), the proper training of children, and honoring family and positive social/family traditions, a Romantic moment where a line of dialogue stresses feelings opposed to head knowledge
Foul Language:
One “a**” obscenity, two strong Jesus profanities, six light exclamatory profanities, and one bleeped obscenity
Violence:
No real violence but there are a couple visits to a hospital where a character is seriously ill, and some references to death
Sex:
No sex
Nudity:
Upper male nudity in one scene when a man takes off his shirt in the summer heat and lies down on a park bench, plus some home movie images of people at a pool where males wear swimming trunks and women wear bathing suits
Alcohol Use:
No alcohol use
Smoking and/or Drug Use and Abuse:
Two or three brief scenes where an older man smokes cigarettes; and,
Miscellaneous Immorality:
Divorced man and woman argue, boy’s father is a superficial person, but he’s there at the end when the boy needs him, and 11-year-old boy turning 12 in the movie is sometimes disobedient and disrespectful but changes as the story moves forward.

TEAM MARCO is an inspiring family drama about a middle-school boy who grows closer to his Italian grandfather one summer when his grandfather introduces him to his favorite game, the ancient lawn bowling game of bocce. TEAM MARCO is funny and poignant, with a strong morally uplifting worldview celebrating family and the importance of grandparents, but there are two strong Jesus profanities and some references to grandparents who’ve passed away that warrant caution for children.

The title character is an 11-year-old boy whose divorced mother, Anna, has moved them out of Manhattan in New York City and to Long Island. When Marco’s widowed grandfather almost burns down his house, Anna insists he stay with them in Marco’s room. Marco, of course, isn’t completely happy with having to share his room with his Nonno, an Italian nickname for grandfather.

Marco is preoccupied, however, with his electronic devices, especially a video game designed by his father, Richie, who still lives in Manhattan. Richie has promised Marco he’ll take him to a major conference in Manhattan for computer apps, including video games, but only if Marco is able to make it to the final level in the video game before the app conference later that summer.

Marco’s preoccupation with the video game and electronic devices doesn’t sit well with his Nonno. Nonno is also upset by the fact that Marco never goes outside to play and doesn’t have any friends. So, while Nonno babysits Marco during the day while Anna works, Nonno takes Marco with him to a park in Staten Island to watch Nonno play bocce ball, the popular European lawn bowling game, with Nonno’s friends. Nonno tells Marco he’ll let him play the video game for the three hours of time Marco’s mother has decreed if Marco goes with him.

The first day of watching his grandfather play bocce doesn’t go well, however. Marco is bored by the slow-moving action. However, when Marco’s grandfather starts introducing the rules of the game to Marco and lets him start playing, Marco quickly develops a passion for the game just like his Nonno.

Marco’s father unexpectedly shows up at Marco’s 12th birthday party in the park, which upsets Marco’s mother, Anna. She’s even more upset when Marco’s father gives a Virtual Reality headset to Marco as a birthday present. Marco is now able to play the video game on the headset. As a result, all thoughts about Marco playing bocce with his grandfather go out the window. What’s even more upsetting, however, is that, after getting the headset, Marco forgets to even say goodbye to his grandfather’s friends, who also attended the birthday party. Adding insult to injury, Marco forgets all about the nice new bocce ball set that they and his grandfather gave to Marco as a birthday present.

Back home, Marco is totally enamored with playing his father’s video game on the Virtual Reality headset. After a day or two of this nonsense, Marco’s grandfather decides to take action. He confiscates all of Marco’s devices and offers his grandson a challenge. In order to get back the devices, Marco has to get a team from his school and beat his grandfather and his grandfather’s friends in a three-game bocce tournament.

Marco accepts the challenge, but how can he interest a group of electronified middle-school children in learning an ancient lawn bowling game played by old people?

TEAM MARCO is a funny and poignant movie, with a strong morally uplifting worldview celebrating family and the importance of grandparents. TEAM MARCO also contains scenes where Marco and his mother honor the memory of his grandmother with his grandfather. The movie also promotes limiting the time that children spend on electronic devices and getting them to play outside with their friends. Eventually, Marco learns that being able to develop friends and spend time with them in person, instead of online, is a crucial part of a fulfilled life. Both he and his new school friends also learn that, while change is inevitable, and there will always be new things to enjoy in life, it’s still important to make an effort to honor and keep the best traditions of time-honored society, especially the cherished traditions of grandparents and great grandparents.

TEAM MARCO also has some positive Christian references. There are a couple verbal references to attending church. Also, the movie opens with a scene of Marco, Marco’s mother and his grandfather traveling to attend the Christian funeral of Marco’s grandmother. At least twice in the movie, Marco’s grandfather walks through the Italian cemetery’s Christian chapel to visit his wife’s remains in a wall filled with narrow grave chambers. A couple other scenes promote repentance and forgiveness.

At one point, though, Marco’s grandfather tells him to focus on his feelings rather than his head knowledge. This comment is a little bit Romantic, in the philosophical sense, but it occurs in the context of the movie’s overall Christian, moral worldview.

TEAM MARCO is almost totally free of objectionable content. There is one “a**” obscenity and a bleeped obscenity, however. Also, there are two strong Jesus profanities and six light exclamatory profanities. Despite this, the Jesus profanities are easily deleted. So, a good clean the screens program on your TV system would make TEAM MARCO an even better drama for the whole family to watch together.

TEAM MARCO also contains some references to grandparents who’ve passed away. These references add some heartrending gravitas and jeopardy to the story, however. Media-wise viewers will find these references and other moments in TEAM MARCO very touching. That said, there is much joy in the movie’s uplifting ending. As Walt Disney, the king of family entertainment, reportedly once said, “For every laugh, there should be a tear.”

MOVIEGUIDE® advises extreme caution, especially younger children, for the references to death and the brief foul language including taking the Lord’s Name in vain in TEAM MARCO.