10 THINGS I HATE ABOUT YOU 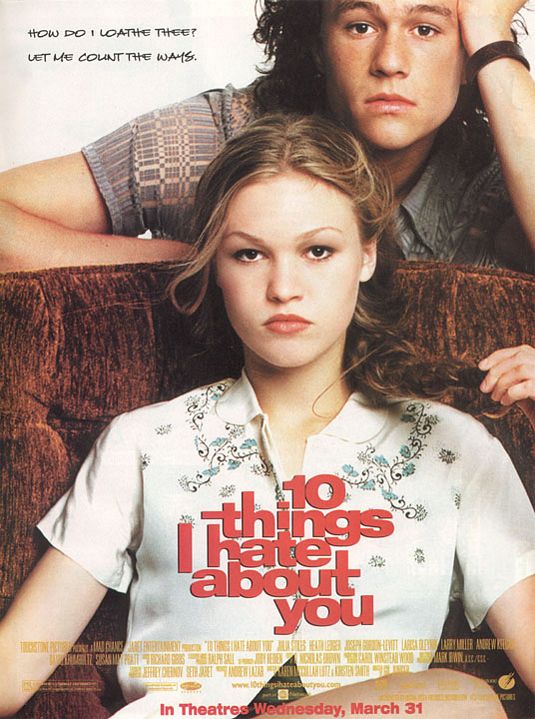 The opening scenes of TEN THINGS I HATE ABOUT YOU are strikingly similar to the recent SHE’S ALL THAT. In fact, it’s the same plot, but with different actors and a decidedly raunchier script. While SHE’S ALL THAT is formulaic but endearing, TEN THINGS I HATE ABOUT YOU is simply formulaic, grating and offensive. Comparing the two movies illustrates how sympathetic characterization and good intentions can go a long way toward determining cinematic success.

TEN THINGS I HATE ABOUT YOU hinges on a promising-sounding premise. Just as SHE’S ALL THAT resembled George Bernard Shaw’s “Pygmalion,” TEN THINGS I HATE ABOUT YOU is based on the similarly-plotted “The Taming of the Shrew.” (What is it with teenagers and Shakespeare these days?) But the great playwright’s handiwork has been twisted into obscenity here. The “shrew” in this story is Kat, played by Julia Stiles, an embittered, feminist high-school student with a hefty chip on her shoulder. She is a misfit just like Lani, the more likeable heroine of SHE’S ALL THAT. Her sister is the flighty, materialistic Bianca (Larisa Oleynik), a sweet temptress who inspires lust among her male classmates at Padua High School. Bianca’s most ardent pursuers are Cameron (Joseph Gordon-Levitt), the nice “new kid,” and Joey Donner (Andrew Keegan), the class stud. Both Cameron and Joey are just dying to ask Bianca out, but the poor oppressed child has a strict father who will not allow her to date. Smitten with the smarmy Joey, Bianca begs her father to change his mind. He feigns concession by promising that Bianca can date whenever her unpopular sister does.

Thus, our heroes are presented with a challenge: in order to date Bianca, they must first find someone to woo the antagonistic Kat. After interviewing several candidates, Joey and Cameron happen upon Patrick, an aloof, mysterious classmate rumored to be an ex-convict. Patrick agrees to give Kat the old college try in exchange for cash.

What follows is entirely predictable (save for its unprecedented lewdness). Joey and Cameron compete for the shallow Bianca’s affections, while Patrick manages to pierce Kat’s crusty exterior to find the vulnerable girl within. Yawn! Of course, Kat eventually discovers, in a contrived revelation scene, that Patrick was paid to romance her, just like in SHE’S ALL THAT when the heroine learns that her suitor asked her out on a bet.

Pat and Kat’s love seems doomed, but, don’t worry, this movie’s makers never stray far from the teen-movie formula. Everybody gets a happy ending. But, in contrast to SHE’S ALL THAT and some other, wittier teen movies, you won’t care about this movie’s ending, because these characters are too obnoxious. SHE’S ALL THAT was charming and sympathetic, while TEN THINGS I HATE ABOUT YOU is simply alienating. The characters in the first movie were basically good kids with good hearts. In contrast, everyone in TEN THINGS, not just the “bad kids,” drinks, has sex (or wants to), swears continuously, and generally discourages the single among us from ever producing offspring. These kids have little or no moral grounding and accept without question the adult activities they all indulge in. Sex and drinking are presented merely as typical high-school activity, and the few adults present are mostly as corrupt as the kids (with the lone exception of Kat and Bianca’s father). In one particularly repulsive scene, Kat helps Pat escape from detention by distracting her soccer coach. How, you ask? When her discussion of game strategy fails to fascinate, she pulls up her shirt and exposes herself. The coach stares at her chest, awestruck, while Patrick climbs out the classroom window.

TEN THINGS I HATE ABOUT YOU compounds its offenses with wooden dialogue, hopelessly amateurish acting and a tedious lack of creativity. There are a couple of bright spots, a scene in which Pat wins an angry Kat over with a Frank Sinatra song and dance, for example, but these little glimmers seem jarringly misplaced in an otherwise dim film. The only new ground this movie truly breaks lies in its post-modern portrait of cynical high-schoolers. Teen movie characters have become as jaded and unmoored as their adult counterparts, and that should scare all of us.

TEN THINGS I HATE ABOUT YOU can only have a detrimental influence on teenagers. If it represents an accurate portrayal of high-school students today, as some speculate, we should quake at the prospect of America’s future.

Writer: Karen McCullah Lutz & Kirsten Smith BASED ON: Shakespeare's "The Taming of the Shrew"