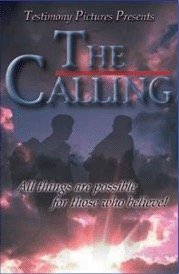 THE CALLING is a Christian movie about a pastor who leaves his Wisconsin church to preach the Gospel of Jesus Christ on the road. Pastor William’s first test comes in Chicago, where a pimp threatens his life after William leads one of the pimp’s prostitutes to Jesus Christ. William promises to pray for the pimp’s crippled mother. When she is healed, the pimp converts. That and other miracles gets the attention of the news media. It also attracts the attention of a Christian talk show host who is disturbed by the ministry of William as an itinerant faith healer. The misguided Christian radio personality sets up William in a contrived sting operation.

THE CALLING is a wonderful surprise – an ultra low budget, "Scotch tape and paper clip" video movie that tells a compelling story and has succeeded in limited release against some stiff competition. Although it has many visible flaws, it shows a lot of filmmaking talent and captured not just my attention but also the attention of my children. Some of the supporting acting needs work, however, and the movie’s theological debates should have been written in a less stereotypical manner

(CCC, Pa, FR, Ab, V, N, M) Strong Christian worldview with a slightly nominalistic tone and some broad stereotypes of conflicting Christian theological positions, including an anti-intellectual approach that mocks a stereotypical Christian anti-cult ministry; pimp threatens pastor with knife; no sex but pastor witnesses to prostitute and her pimp and pastor kisses his wife and asks another pastor to leave hotel room so he and his wife can have some time alone; upper male nudity in natural settings; and, deceit, bearing false witness and anger rebuked.

THE CALLING is a wonderful surprise – an ultra low budget, “Scotch tape and paper clip” video movie that tells a compelling story and has succeeded in limited release against some stiff competition. Although it has many visible flaws, it shows a lot of filmmaking talent and captured not just my attention but also the attention of my children.

The simple story involves a pastor who is called to go on the road to preach the Gospel of Jesus Christ. His first crisis comes in Chicago, when he tries to defend a prostitute, who accepts Jesus Christ as her Lord and Savior, from her pimp, who wants her back. Pastor William speaks to the pimp’s spiritual needs for the healing of his crippled mother and offers his life for the prostitute’s if the mother doesn’t get healed. By God’s grace, the mother gets healed, and the pimp comes to Christ.

Soon, the news media is trying to figure out who this mysterious miracle man is. They only have a blurred photo of Pastor William. This attracts the attention of a theological watchdog who makes it his purpose to show that Pastor William is a fraud. When nothing else works, he sets William up in a contrived sting operation, forcing William to go on trial for allegedly advising a dangerously ill man not to seek a medical doctor.

This storyline follows a contemporary incarnational Christ pattern. It differs from incarnational literature in its surprise ending. In this way, the movie parallels the movie JOSHUA, and it suffers from the same theological difficulty of JOSHUA by pitting the good incarnational figure against the bad Christian. This is a dramatic necessity for developing the plot, although it would have worked even better if the villain were not a Christian. In both movies, this skews the movie’s theology and presents a stereotypical depiction of important theological debates.

With this in mind, however, the movie is a strong witness to the Gospel and the presence of God in the lives of faithful people. It tries to distance itself from nominalism, but leans in that direction. Even so, it is a powerful encouragement to Christians and non-Christians alike. The jeopardy is all too real, and so the movie has captured audiences, even at secular film festivals.

It would be nice to see what could happen if the filmmakers had a bigger budget and some help with script development and acting. However, the movies displays raw talent, including the performance by the star, Herb Porter, and, as such, needs to be applauded. THE CALLING is a diamond in the rough; and, has proved itself to be a strong witness on the power of God to those who watch it.