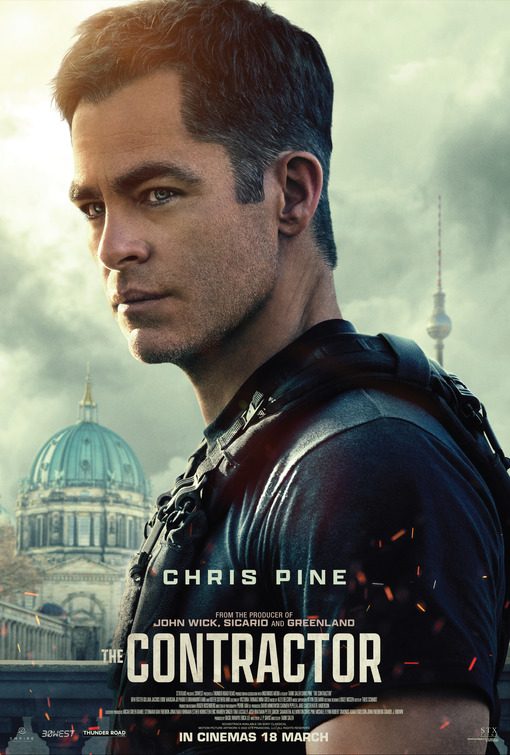 THE CONTRACTOR is an action thriller. Chris Pine stars as James, a forcibly retired Army Ranger with a bad knee and a wife and son. The military took away his pension, leaving the family in dire economic straits. So, James joins a mercenary outfit that does black ops oversees. He and his new team are sent to Berlin to retrieve some data from a secret bio-weapons lab. Or, so they are told. The mission goes sideways, and James must run for his life.

THE CONTRACTOR is an earnest action thriller that shows respect for the grunts in the field and their families back home. The first act shows the difficulties that soldiers, veterans and their families face. Otherwise, though, THE CONTRACTOR is a rather cynical, depressing, politically correct movie. It depicts a really dark world where the American military and national security apparatus is itself a total scam that uses, abuses and betrays ALL soldiers and veterans. THE CONTRACTOR also has many ‘f” words and some very strong bloody violence in a few

(RoRo, PCPC, APAP, BB, P, C, LLL, VVV, A, DD, MM)
Dominant Worldview and Other Worldview Content/Elements:
Strong Romantic, politically correct, Anti-American liberal/leftist worldview says the American military and national security apparatus is a total scam that uses, abuses and betrays all soldiers and veterans, mitigated by strong moral, pro-family elements that shows respect for the grunts in the field, but some soldiers, including the protagonist, are not above killing police and other nefarious behavior, which goes along with the movie’s negative worldview, plus there’s an uplifting, patriotic church scene where the Christian pastor praises the sacrifice of several American soldiers going overseas, saying that the men “protect us” and vanquish “wrongdoing” and represent righteousness, but the movie’s worldview and plot undercut this patriotic picture
Foul Language:
54 obscenities (including many “f” words) and one GD profanity
Violence:
A few very strong bullet hits during gun battles, many men shot and killed, American mercenary soldiers kill some German police, several intense scenes of hand-to-hand combat, American mercenary soldiers knock out lab scientist and blow up his lab with him in it, the bad guys get their just desserts at the end in a gun battle
Sex:
No sex scenes, but a married couple is shown in their bedroom
Nudity:
Some upper male nudity and rear male nudity
Alcohol Use:
Brief alcohol use
Smoking and/or Drug Use and Abuse:
No smoking, but soldier with damaged knee has been injecting himself with mediation the military says is “dirty”; and,
Miscellaneous Immorality:
Betrayal, greed, lying, protagonist holds mother at gunpoint to get her husband’s secret files.

THE CONTRACTOR is an action thriller starring Chris Pine as a retired Army Ranger with a bad knee and a wife and son, who gets hired to help steal some biological warfare intel from a lab in Berlin, but the job is a total scam that puts his life in deadly danger. THE CONTRACTOR is an earnest, action thriller that shows respect for the grunts in the field and their families, but it’s a liberal/leftist conspiracy thriller with constant foul language and intense violence, which says the American military and national security apparatus is a total scam that uses, abuses and betrays all soldiers and veterans.

The movie’s first act shows James, the retired Army Ranger, despite an injured knee, working extremely hard to get back on active duty. However, one of the drugs he uses to help recover is declared illegal. As a result, although he is honorably discharged, he loses all his healthcare and the extra pension he’s built up as a Ranger. This puts James and his family in an untenable position. With no salary, no pension and a backlog of bills to be paid, their situation is desperate. So, James must now do something he swore he was never going to do – contract himself out as a mercenary.

However, his closest friend, Mike, is working for an off-the-books company that does black jobs for the government, the military and companies connected to it. The company is run by a tough

former Marine named Rusty. Despite some contention about the nature of the jobs, James agrees to work for Rusty. As a result, he gets a $50,000 advance bonus.

Rusty gives a special team with Mike, James and several other guys a job in Berlin to steal some biological warfare info from a lab run by a Middle Eastern scientist. However, the German police arrive earlier than expected, so the men blow up the lab, including the scientist, and have to kill some of the police to escape. During the battle, Mike’s upper thigh gets a bullet wound. James carries Mike to safety in a sewer and patches up his leg. However, James has thrown out his knee and needs to rest in the sewer for 24 hours while Mike goes to set up the extraction from Germany. He agrees to meet up with Mike 48 hours later at their hotel.

The 24 hours in the sewer pass. James makes it to his hotel room and waits for the other 24 hours, but Mike doesn’t show. So, James exits the hotel, buys an unsecured burner phone and calls Rusty. Rusty gives James an extraction location, where his rescuers appear driving a brown BMW. James is told Mike was captured by the authorities. Then, the two men in the BMW and several men riding motorcycles start firing machine guns at James in the street, hitting a few civilians. A chase ensues along a river bank.

Will James get out of Germany alive? Will he ever get back to his family in America, considering that Rusty now wants to liquidate him?

THE CONTRACTOR is an earnest action thriller that shows respect for the grunts in the field and their families back home. The movie’s first act shows the difficulties that soldiers, veterans and their families face behind the scenes. It also shows the careless and sometimes disdainful ways the federal government treats its servicemen and women. The movie’s second half is an intense thriller as James must fight to earn his way back home and reunite with his family.

Otherwise, however, THE CONTRACTOR is a rather cynical, depressing movie. The movie is definitely pro-family and pro-soldier, but it depicts a really dark world where the American military and national security apparatus is itself a total scam that uses, abuses and betrays all soldiers and veterans.

Of course, it’s become very clear from recent events that there’s some major corruption going on in the Pentagon and in America’s intelligence agencies and national security apparatus. For example, we’ve found out that more than 50 intelligence experts lied to the American people that the story about Hunter Biden’s laptop was a “Russian disinformation campaign.” Also, when President Biden hastily withdrew from Afghanistan, we learned that the Pentagon willingly left behind $80 billion in state-of-the-art military equipment for the Taliban terrorists! These actions are certainly a betrayal of American servicemen and women as well as a betrayal of the American people. However, this movie goes a step further by saying the whole system is corrupt as well as a big scam. As such, it appears to reflect a strong Romantic, politically correct worldview overall. Television has interviewed many soldiers in this day and age, and MOVIEGUIDE® has never gotten such a negative impression from watching most of these fine and honorable men and women discuss their service or current events.

Adding insult to injury, the movie opens with a church scene where James and his family watch the Christian pastor praise several soldiers about to be deployed overseas. The pastor says that the men “protect us,” vanquish “wrongdoing” and represent righteousness. The rest of the movie is deliberately designed to undercut if not mock the pastor’s sincere, patriotic words.

THE CONTRACTOR also contains many strong obscenities and some very strong bloody violence in a few images.

All in all, therefore, MOVIEGUIDE® declares THE CONTRACTOR unacceptable and excessive.