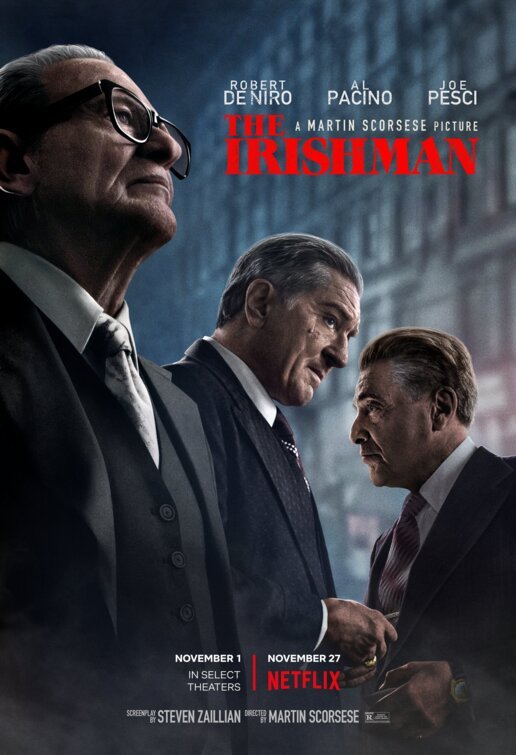 THE IRISHMAN is an epic gangster movie by Martin Scorsese about an Irish union leader and mob hit man. Upon returning from WWII, where he admitted to killing German POWs in cold blood, Frank Sheeran gets married and becomes a truck driver. Frank has a chance meeting with the Mafia head, Russell Bufalino, in Pennsylvania. Soon, Frank is doing strongarm jobs and murders for Russell, who becomes Frank’s friend. Eventually, Frank becomes bodyguard and hitman for Teamster Union leader Jimmy Hoffa, who’s also connected with the Mafia. Things change when Hoffa becomes a liability.

As an epic gangster movie, THE IRISHMAN is meticulously crafted and absorbing, despite its three-hour plus running time. Robert De Niro portrays Frank Sheeran as a cold, calculating killer. Al Pacino plays Jimmy Hoffa as a mad, passionate genius who loves the Teamsters Union. Hoffa’s ego gets in the way, however. THE IRISHMAN portrays a brutal life of crime and warped relationships. Eventually, Frank seeks answers from a Catholic priest, but the movie’s ending is open-ended otherwise. THE IRISHMAN also contains abundant foul language and extreme violence.

(PaPa, CC, B, APAP, LLL, VVV, N, A, D, MMM):
Dominant Worldview and Other Worldview Content/Elements:
Strong mixed pagan worldview about a man who claims to have been a hitman for the Mafia and the Teamsters Union, which was connected to the mob, where the man details his life of crime, but, at the end, he consults with a Catholic priest about his possible salvation, though the ending and final image are open-ended, the man becomes estranged from his children, and the movie can be seen as providing a morality lesson, plus the movie presents a dark vision of America as being corrupt, but perhaps because men are sinful from their youth
Foul Language:
At least 211 obscenities (mostly “f” words), five GD profanities and one light profanity
Violence:
Extreme violence includes multiple point blank gunshot murders with a hitman brutally killing people in cold blood and blood spraying (the blood spraying is compared to painting houses), car bombs explode, two men fight while having lunch in prison in one scene
Sex:
No sex scenes implied or otherwise, but protagonist gets a divorce
Nudity:
Upper male nudity in one scene
Alcohol Use:
Lots of alcohol use
Smoking and/or Drug Use and Abuse:
Smoking but no drug references; and,
Miscellaneous Immorality:
Very strong miscellaneous immorality includes union corruption, stealing, much gangster activity, mobsters raid union pension fund, lying, man steals meat from his meat truck and denies having any knowledge of the theft, man prepares to commit arson against a laundry company but stops when he learns the Mafia has a piece of the action.

THE IRISHMAN is an epic gangster movie by Martin Scorsese about an Irish teamster leader and mob hit man who allegedly became a protégé and friend of the head of the Bufalino crime family and Teamster Union leader Jimmy Hoffa in the 1950s, 60s and 70s.

The movie opens with former local Teamster leader and mob hitman Frank Sheeran sitting in a wheelchair, near the end of his life circa 2000, in an old folks’ home. Frank recalls a time in 1975 while driving with his closest friend, Pennsylvania mob boss Russell Bufalino, up to Detroit for a union convention with their two wives at the time. The movie flashes back and forth through Sheeran’s career in the mob and in the Teamsters. The drive in 1975 conjures up memories of Frank and Russell having a chance meeting outside a gas station and diner where Frank is having trouble with the meat truck he’s driving. Russell helps Frank get his truck running, and Russell gives him his contact.

Pretty soon, Frank is working as a legbreaker and hitman for Russell and crime boss Angelo Bruno. In a voiceover narration, Frank explains that, by the time he met Russell, he was already hardened by his experience as a soldier during World War II in the Italian theater. According to Frank, his superior officers often ordered him to shoot German and Italian POWs down in cold blood in the woods to get rid of them. Killing people for the mob was no different in his mind, Frank says.

Eventually, Russell asks Frank if he’d like to become an enforcer for the popular Teamster President Jimmy Hoffa. Russell’s brother, Bill, is Jimmy’s personal lawyer. Frank loves the union and would like nothing better than work with Jimmy. Frank and Jimmy become fast friends, bonding closely with one another because of their love for the Teamster Union. They become such good friends that Hoffa even lets Frank run for an important Teamsters local union.

In 1964, however, Hoffa’s convicted of jury tampering and improper use of the union’s pension fund. Hoffa’s sent to prison and, while in prison, the Mafia is able to raid the union’s pension fund to an even greater extent under Hoffa’s successor, Frank Fitzsimmons, rank narrates. After being pardoned by President Nixon in 1971, Hoffa decides he wants to take back his job as union president, but many people oppose him, including some of the stronger mob-connected union leaders. This doesn’t sit well with Hoffa, and he starts to publicly criticize the ties Fitzsimmons has with the mob, Russell tries to get Frank’s help to convince Hoffa to back off, but Hoffa doesn’t listen. Eventually, Frank has to pick a side between his two friends, Russell the mobster or Hoffa the charismatic union leader.

As an epic gangster movie, THE IRISHMAN is meticulously crafted. As such, the movie is indeed absorbing, despite its 209-minute running time, nearly three and one-half hours. Robert De Niro and Joe Pesci portray Frank Sheeran and Russell Bufalino as cold, calculating killers. Al Pacino plays Jimmy Hoffa as a mad passionate genius who lets his ego get too involved with his love for the union and its workers. It’s MY union, he keeps telling people. Pacino’s performance here is truly electric. He gives several supercharged union speeches that show why Teamster members really loved Jimmy Hoffa.

Sheeran contends that he was the one who assassinated Hoffa in an unoccupied house in a Detroit suburb. He also claims that, after he left the house, the Mafia sent cleaners into the house to wrap up Hoffa’s body and have it cremated. Sheeran’s story may be one of the more convincing stories of what happened to Hoffa, who disappeared in 1975, but there are a couple other stories that are also plausible. Some critics believe Sheeran was right about how Hoffa died but made up the story that he was the actual assassin. According to the FBI, some blood found in the house was too degraded to be linked to Hoffa via DNA, so the case remains open. Other portions of Sheeran’s story, such as the late-night murder of mobster Joey Gallo, have been brought into question as well. However, the publisher of the book on which THE IRISHMAN is based has written a point-by-point refutation of some of these criticisms.

That said, THE IRISHMAN ends on a slightly redemptive note. Frank starts talking with a Catholic priest about God and confesses to the priest about his life of crime. The movie doesn’t show Frank converting or accepting Christ, but he listens intently as the priest tells him that, though Frank may find it hard to feel remorse for what he’s done, it’s enough to begin the road toward faith by choosing to confess your sins to God and ask forgiveness. By doing so, the priest says, you might eventually come to feel the regret and remorse you should be feeling. However, the movie also shows how Frank lost the respect of his daughters for his life of crime and murder. In fact, the youngest daughter in the movie never reconciles with Frank. So, despite Frank’s meetings with the priest, the ending to THE IRISHMAN implies that, ultimately, grace and happiness eluded Frank Sheeran. It’s an open-ended conclusion, however. Scorsese leaves the door open for the viewer to decide the ultimate meaning of what they’ve just seen.

In some respects, THE IRISHMAN is a morality lesson. In the end, death comes to us all, and we are faced with a decision regarding our ultimate destiny in the afterlife, especially our relationship with God through Jesus Christ and with those around us.