"Nobody Takes Our Flag" 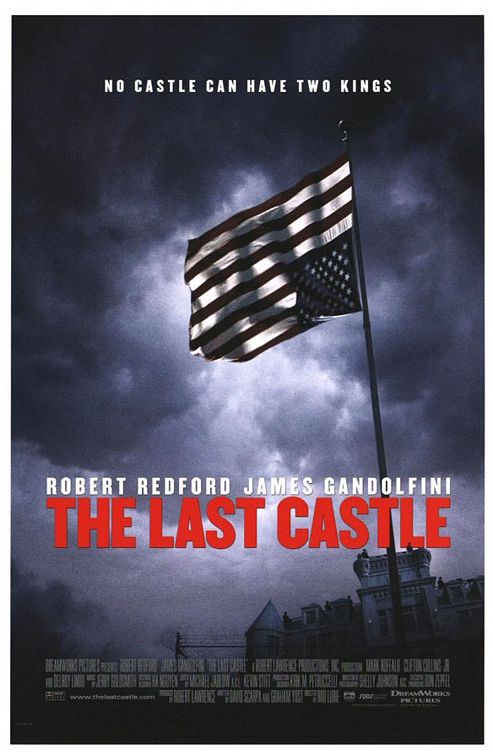 In THE LAST CASTLE, Robert Redford plays General Irwin, a Vietnam War hero court-martialed for disobeying a presidential order that cost eight lives. Irwin is sent to a military prison run by Colonel Winter, played by James Gandolfini of HBO’s THE SOPRANOS. Winter is a no-nonsense commandant. Irwin just wants to do his time and go home, but he unknowingly insults Colonel Winter. Winter begins to think he’s going to have more trouble with this guy than he imagined. Eventually, Irwin leads a prison revolt, and the movie ends on a patriotic note.

James Gandolfini does a superb job as the controlled, tightly-wound Colonel Winter. Robert Redford may be a bit miscast as the heroic General Irwin, but his charisma and acting abilities are undeniable. Director Rod Lurie shows a flair for action, and the script provides fertile ground for the movie’s final patriotic message. Regrettably, THE LAST CASTLE contains far too much strong foul language. The rest of the movie is fairly clean and moral, however, and the violence is not excessive, despite the R rating. Best of all, THE LAST CASTLE proudly exalts honor, duty, integrity, and country while promoting good leadership qualities.

A rousing, action-packed ending with a patriotic finish overcomes some predictable plot points in THE LAST CASTLE. The movie stars Robert Redford and James Gandolfini of the popular but violent HBO-TV drama, THE SOPRANOS, as a court-martialed general and the warden of a military prison who lock horns in a battle of wills. Although director Rod Lurie (DETERRENCE and THE CONTENDER) does not completely get rid of his humanist worldview here, he holds it in check to deliver a powerful prison drama that exalts honor, duty, integrity, and country.

Redford plays General Eugene R. Irwin, a Vietnam War hero who has been court-martialed for disobeying a presidential order that cost the lives of eight soldiers. Irwin is sent to a castle-like military prison run by Colonel Winter, played by James Gandolfini. Winter is a no-nonsense commandant. Irwin just wants to do his time and go home, but he unknowingly insults Colonel Winter, who now begins to think he’s going to have more trouble with this guy than he imagined.

THE LAST CASTLE then proceeds to become the archetypal prison drama. Predictably, Irwin befriends a young, naïve private named Aguilar, whose stuttering and lack of intelligence engenders abuse from both the prisoners and the guards. Winter doesn’t like the fact that Aguilar starts saluting Irwin, especially when that triggers similar nods of respect from the other prisoners. Further irking Winter is the fact that, not only does Irwin seem to enjoy such attention, he also seems to be using it to bolster self-respect and camaraderie among the prisoners. Irwin tells another prisoner, named Yates, that he tries to extract the best from men rather than their worst. Making matters worse is that several prisoners tell Irwin that three prisoners have died during several previous disturbances under Winter’s command. Irwin refuses to help them, however, citing his desire not to make trouble.

Naturally, the conflict between Irwin and Winter comes to a head when Irwin tries to defend Aguilar from being physically hurt by one of the guards. Winter comes down hard on Irwin, but Irwin achieves a moral victory, earning even more respect from the other prisoners. Now, Winter really does have something to worry about, so he tries to take further action against this new “army” that Irwin has apparently created. Tragedy ensues, however, leading to a rousing, exciting prison revolt that ends on a very patriotic note.

James Gandolfini does a superb job as the controlled, tightly-wound Colonel Winter. Robert Redford may be a little bit miscast as the heroic General Irwin, but his charisma and acting abilities are undeniable. Director Rod Lurie, who himself has a West Point and political science background and used to be a movie critic, shows a flair for shooting battle scenes. It has also become clear that he enjoys making movies which resemble dramatic mini-dissertations on the exercise of power. At least in THE LAST CASTLE he avoids the left-wing Christian bashing of his last movie, THE CONTENDER, which also had a patriotic ending (though the patriotism in that movie was far less inclusive, and, hence, more self-righteous, than the patriotism in THE LAST CASTLE). The script by David Scarpa and Graham Yost adds to this potent mix by providing a fertile ground for the movie’s final patriotic message.

Regrettably, THE LAST CASTLE contains plenty of strong foul language, though the amount of obscenity seems to drop off a bit during the movie’s more action-filled second half. The rest of the movie is relatively clean and moral, however, and the violence falls short of being excessively gruesome or offensive. As noted above, THE LAST CASTLE exalts honor, duty, integrity, and country. It also promotes good leadership qualities and traditional military values. There’s even an implicit condemnation of one prisoner’s gambling operation.

Of course, it would have been infinitely better if THE LAST CASTLE had also exalted God and His Word, the Bible. The United States should, after all, be one nation under God. As President John Adams, one of our greatest patriots, wrote on June 21, 1776, “It is Religion and Morality alone, which can establish the Principles upon which Freedom can securely stand.” This is the same John Adams who signed the 1783 Treaty of Paris, that proclaims, “In the Name of the Most Holy, Undivided Trinity.”