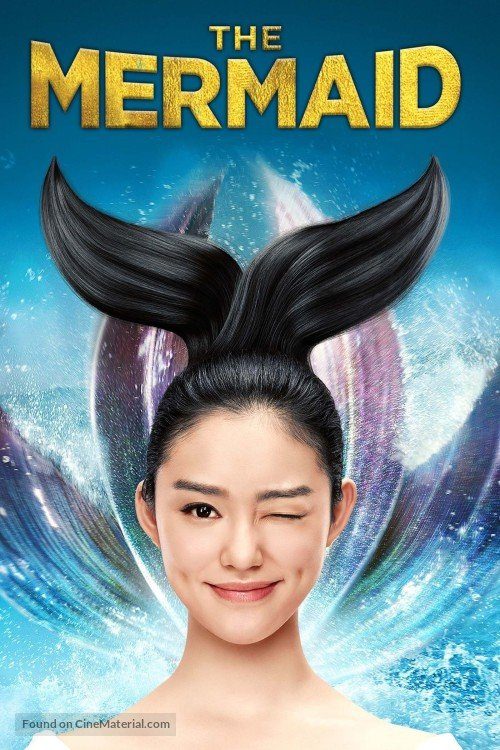 THE MERMAID is an attempt at comedy that falls short in almost every way. When mermaid Shan is sent to assassinate billionaire playboy Liu, she never expects to fall in love with the man responsible for killing her people. As the two get to know each other, Liu begins to see the error of his ways and falls for her. Shan lowers her guard just enough for Liu to find out her true identity. Then, it’s up to him to either destroy her for money or save her out of the goodness of his reformed heart.

At first, THE MERMAID seems to be a redemption story where one man learns the error of his greedy ways. It even includes warnings about the love of money and positive messages of self-sacrifice and love. Sadly, those positive moments don’t outweigh the movie’s cons. They get lost in THE MERMAID’s crude humor, foul language, gratuitous violence and gore, sex jokes, promotion of evolution, and pagan, anti-capitalist messages. Eventually, THE MERMAID leads to a pagan message of worshipping the planet rather than the God who created it.

(PaPa, AcapAcapAcap, EE, EvEvEv, B, C, LL, VVV, SS, NN, AA, D, M) Strong pagan, immoral worldview with very strong anti-capitalist elements where a Chinese capitalist rather than the Chinese government is seen as the primary destructive force behind harm to the environment and animals, with strong environmentalist elements combined with multiple allusions to evolution as fact, lax attitudes towards sexuality, love of money is strong throughout the story but is depicted in an ultimately negative light, and some light moral, redemptive elements supporting love, speaking against greed and villain sees the error of his ways; 15 obscenities, one GD and two OMGs, plus several scatological moments include multiple references to “crapping pants” and passing gas, two scenes of characters vomiting, and one instance of a half-man/half-octopus creature spewing ink out of his mouth as if vomiting; very strong, strong and light, sometimes comical or slapstick, violence includes scene of cartoon-style violent involving a man being thrown around by a jetpack, a man gets pushed around in the street, another cartoon-style comical scene involves numerous security detail personnel tackling a runaway mermaid, multiple scenes with shots of mermaids with cuts/scars/burns on their faces, a sonar weapon causes a goldfish to explode in a fish tank, multiple scenes involve a poisonous arrow that causes the victim to foam at the mouth, a comedic attempted assassination involves a character getting hit in the head with multiple sea urchins, stepped on with crushed fingers, accidentally stabbing herself, and being hit in the face by a golf club, a comedic sequence involves Octopus’ tentacles being chopped, burned and ground up, a character looks up a graphic YouTube video of dolphin slaughters, a woman slaps a man, a woman slaps another woman, and the third act contains excessive violence and blood including dead, burned mermaids, mermaids being riddled with bullets, blood filling the water, brutal hacking of mermaids and blood pouring onto the deck, huge title waves killing attackers, mermaids and people being pierced by harpoons, shot, beaten, and blown up with graphic wounds depicted; numerous references to the main character being a “pervert”, and the plot centers on seducing him, reference to a $200 prostitute, a scene of a man folding/tickling/necking with a woman, an octopus man attempts to put on a pair of pants, but one tentacle protrudes out of the zipper in a suggestive manner, a woman lies in bed seductively and makes innuendos to a man with his shirt unbuttoned, and characters draw a couple dirty pictures; a male wears a bikini top dressed as a fake mermaid, the bottom of his costume is removed revealing his rear end, all mermaids in the movie wear bikini tops and Octopus does not wear a shirt, and in a shot from the shoulders-up, a woman removes her shirt suggesting bare breasts, a character draws a cartoon of a mermaid with bare breasts and another character draws a cartoon of a mermaid with male genitalia; alcohol is used as an antidote for poison in several scenes, plus characters drink for leisure; an attractive character smokes cigarettes; and greed, love of money and selfishness but rebuked.

THE MERMAID is a goofy Chinese comedy from the filmmaker who made KUNG FU HUSTLE and SHAOLIN SOCCER, Stephen Chow. The crude, violent movie has little redemptive quality, focusing more on comical gags than a simple plot about two star-crossed lovers, Shan and Liu Xuan.

Liu Xuan is a spoiled, selfish billionaire and notorious playboy, who acquires an island to grow his real estate empire. However, in order to acquire permits, he must prove that his construction will not endanger any of the marine life. He comes up with an evil plan to use lethal sonar to destroy all signs of life in the area, essentially killing hundreds of fish, sharks and dolphins in the process. Caring very little about the environment, he celebrates his real-estate victory by throwing a party where Shan, an innocent young girl, begs Liu to take her phone number and give her a call.

It’s then revealed that Shan is actually a mermaid, living in the mermaid community where Liu plans to grow his empire. Many of Shan’s fellow mermaids are sick and dying because of the deadly sonar weapons. Disguising herself as a human, Shan is part of a secret plan to seduce Liu and assassinate him in order to save the mermaids.

However, as Shan and Liu spend time together, they genuinely begin to fall for each other. Shan second-guesses the assassination plan while Liu gets closer and closer to the truth about her identity. Once he actually discovers she’s a mermaid, it’s a test of his conscience to see if he will choose his money or his heart. To make matters worse, Liu isn’t the only one who discovers the secret of the mermaid’s identity. So, the story becomes a race against time to save her entire race.

THE MERMAID has everything one would expect from a crowd-pleasing, lowbrow comedy. Shattering numerous Chinese box office records, the comedy plays to the lowest common denominator. While some scenes of slapstick offer moments of mild amusement or surprise, most of the movie’s comedy falls flat and becomes tedious. Ultimately, the movie spends too much time trying to make audiences laugh and not enough time trying to make audiences feel. The love story between Liu and Shan is underdeveloped and shallow, as is Liu’s ultimate redemption. Characters seem to be motivated by their own tropes rather than actual developments within the story. In the beginning, Liu simply states, “I’m shallow. All I care about is money.” The filmmakers make it very clear that The Mermaid is not to be taken seriously, to the detriment of the story, however.

Ultimately, THE MERMAID has a strong anti-capitalist message. After Liu learns his lesson, he says, “If there’s not a drop of clean water, and not a breath of fresh air on this planet, then it would be meaningless no matter how much money you make.” Until he repents, the Chinese capitalist (not the totalitarian Chinese government) is viewed as the villain who’s despoiling the environment.

On a positive note, however, the capitalist eventually changes his ways. Also, a wise mermaid gives Shan advice about love. She says that some humans can be good: “Love is all around. Love is patience. It can stand the test of time.” To Christians, this may seem like a nod to Chapter 13 of First Corinthians, but the movie stops its positive lesson about love there.

The biggest problem with THE MERMAID is that its light moral, redemptive content gets lost in a sea of crude jokes, foul language, sexual references, and gory violence. The characters have very loose morals. Also, evolution is brought up multiple times as an assumed fact. When describing how mermaids came into existence, the “wise” mermaid tells the crowd that man used to be apes, and some of these apes lived in the sea billions of years ago. They evolved fins and became mermaids. These views directly conflict with God’s creation of the planet. It also eventually leads to a pagan message of worshipping the planet itself rather than the God who created all things and sent His only begotten Son to deliver us from sin.