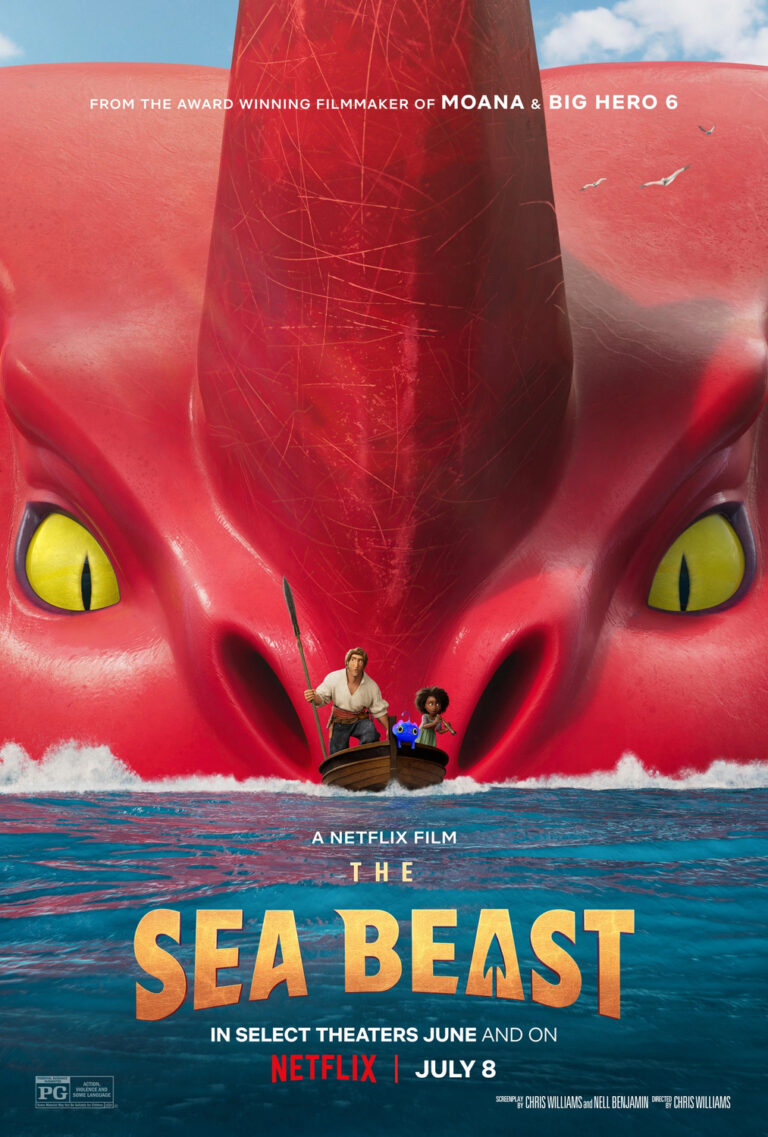 THE SEA BEAST is an animated adventure on Netflix. An orphaned girl named Maisie stows away on board the ship of Captain Crow, who’s chasing a giant sea beast called Red Bluster because it took his eye. Crow orders his adopted adult son, Jacob, to look after Maisie as Crow looked after Jacob when Jacob was young. However, after a battle with Red Bluster, Maisie and Jacob learn that the sea beasts aren’t malicious. Can they save Red Bluster from Captain Crow’s vengeance and convince people to stop killing the sea beasts?

THE SEA BEAST is a little long, but it’s an exciting, sometimes humorous, fantasy adventure for families with older pre-teenagers. The plot is engaging and fast moving, and the animation is gorgeous. THE SEA BEAST has a strong moral worldview. It shows friendship and kindness can overcome strife and misunderstanding. It stresses doing the right thing. However, there are some light Romantic, environmentalist elements and light, brief foul language. Also, the action scenes are intense, perilous and sometimes scary. So, MOVIEGUIDE® advises caution for younger children and sensitive older children.

(BB, Ro, Fe, L, VV, N, M):
Dominant Worldview and Other Worldview Content/Elements:
Strong moral worldview shows friendship overcomes strife and stresses doing the right thing, kindness and working hard, with a Romantic element about chasing after your dreams, but there’s an implicit warning that sometimes your dreams are based on lies or falsehoods
Foul Language:
Three “h” words, one “a” word, a man swears, “By God,” and two uses of the word “bloody”
Violence:
Moderate level of cartoon action violence includes several scenes of fighting against sea beasts, one green beast has tentacles that grab a couple people on a ship, sailors chop off green tentacles and there’s dark green blood spewing in one case, man jumps out of the way before green monster’s large teeth chomp on him, use of knives and spears where people are almost impaled or cut, victims are seen with wounds and cuts and blood, a bloody hand is shown, a couple of sea mates are amputees which implies worse has occurred (but nothing shown), a child tries to kill an adult with a knife, two men engage in a swordfight, ship is in danger of being dragged down to the ocean depths, a huge sea beast takes a man and a child into its mouth, man and child swing from a rope, and a huge sea beast fights with a giant crab, man hurls a spear into the giant crab
Sex:
No sex
Nudity:
Upper male nudity
Alcohol Use:
Three scenes of alcohol use
Smoking and/or Drug Use and Abuse:
No smoking or drugs; and,
Miscellaneous Immorality:
Light miscellaneous immorality such as lying, greed, obsession, and vengeance, but rebuked explicitly or implicitly.

THE SEA BEAST is an animated action adventure on Netflix about an orphan girl who stows away on a ship that hunts and kills dangerous sea beasts but befriends one of the creatures. THE SEA BEAST is a little long, with scary and perilous action scenes, but it’s an exciting, sometimes humorous, fantasy adventure showing friendship overcoming strife and misunderstanding, and it stresses doing the right thing.

An orphan girl named Maisie Brumble desires to become a hunter of giant sea beasts like the crew of Captain Crow’s ship, the Inevitable. Maisie reads stories about the Inevitable to the younger orphans. Long ago, sea beasts ravaged the shores, killing people and wreaking havoc on all who meet them, bringing on the “Dark Times.” No one was safe. Thanks to the hunters, however, all that is gone. Meanwhile, the greatest of the hunting ships, Captain Crow and his crew, risk their lives to make sure the giant horned sea beast named Red Bluster doesn’t return.

Years ago, Captain Crow picked up an orphaned boy named Jacob, whose parents were killed during an encounter with a sea monster. Jacob is now one of Crow’s most trusted sailors besides the first mate, Sarah, and Crow wants to pass on his legacy of monster hunting to Jacob.

One day, the crew spots Red Bluster. Captain Crow wants to go after the sea beast, but they also spy another ship on fire trying to fight another sea monster. Jacob convinces the Captain to rescue the other ship. An exciting sea battle ensues between the Inevitable and the sea monster, who looks like a giant green crocodile. During the battle, the Inevitable suffers serious damage. Captain Crow decides they must sail back to port. The crew is discouraged, but Jacob rallies the crew. Captain Crow promises Jacob that, after they kill Red Bluster, he will retire and pick Jacob as the new captain.

Back at port, the King and Queen demand the horn of Red Bluster. They want to use another ship besides the Inevitable to hunt down Red Bluster, but Jacob convinces them to give Captain Crow and his crew one more chance.

In the meantime, Maisie stows away on the ship before it leaves port to hunt Red Bluster. Jacob must care for her and keep her out of trouble. As they travel together, Jacob teaches Maisie about survival, not only for sea life, but in real life as well.

The ship returns to where the crew last spotted Red Bluster. They soon find Red Bluster and attack the sea beast. However, Red Bluster turns the tables on them and starts dragging the whole ship down into the ocean depths by tugging on the ropes that the crew’s harpoons have wrapped around the creature. To save the ship, Maisie starts cutting the ropes. Captain Crew orders Jacob to stop her, but the order doesn’t make any sense because the whole crew is about to drown. So, he helps Maisie cut the ropes to free Red Bluster and stop the beast from drowning the ship and its crew.

Captain Crow is so angry that he points his gun at Jacob and Maisie for letting Red B luster get away. Suddenly, Red Bluster appears, knocks their side of the boat into the air and swallows Jacob and Maisie.

Red Bluster takes Jacob and Maisie to a small island populated by other, smaller beasts. Maisie befriends Red Bluster and decides the beast isn’t malicious. She has a hard time convincing Jacob, however, though she appears to be right.

Meanwhile, believing that Red Bluster has killed Jacob, Captain Crow is even more obsessed with killing the creature. An elderly merchant gives him poison and a large harpoon to kill Red Bluster.

Can Jacob and Maisie save Red Bluster from Captain Crow’s vengeance and convince people to stop trying to kill the sea beasts?

THE SEA BEAST is a little long, but it’s an exciting, sometimes humorous, fantasy adventure for families with older pre-teenage children. The plot is engaging and fast moving, which will hold children’s attention. The theme of hunters and sea beasts isn’t a common. One, so the story may be confusing for some children. However, the fact that both Jacob and Maisie are orphans brings out the movie’s theme of kindness. For example, Captain adopts Jacob as his son, and, in turn, Jacob treats Maisie like his own child. Families will love the relationship that grows between Jacob and Maisie. Their characters are very relatable as every child wants to be accepted and loved.

The movie’s use of computer-generated graphics is wonderful. The animation is especially brilliant during the scenes where the sailors fight the sea beasts. The camera follows the beasts’ twists and turns as they entangle themselves around the hunters and the ships.

THE SEA BEAST has a strong moral worldview showing that friendship and kindness can overcome strife and misunderstanding. It also stresses doing the right thing and hard work. The movie reinforces a theme of being special through Captain Crow’s references to Maisie as having a “fire” inside her like Jacob. This is seen as a good thing when the captain encourages Jacob to mentor Maisie in the same way the captain mentored Jacob as a young boy. The scenes where Jacob and Maisie are swallowed by the sea beats will remind media-wise viewers of the biblical story of Jonah and the whale.

THE SEA BEAST has many intense, perilous and sometimes scary action scenes. For example, the movie showcases many fight scenes where sailors use swords and harpoons to kill sea creatures. THE SEA BEAST also has four light obscenities and one light profanity. So, MOVIEGUIDE® advises caution for younger children and sensitive older children.