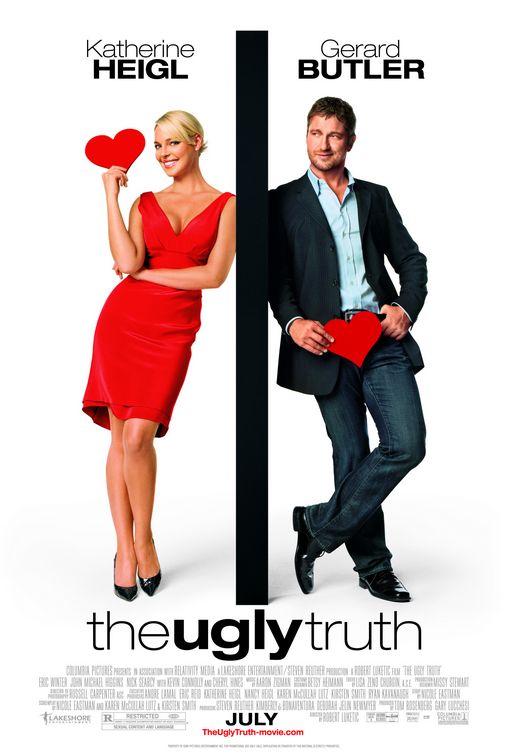 THE UGLY TRUTH, a romantic comedy, opens with a producer of a local morning TV show in Sacramento learning from her boss that the ratings are sinking. The next day, Abby’s boss brings in Mike, the crude host of a love advice show called “The Ugly Truth,” to do regular segments on Abby’s show. Mike’s segments, which are deliberately racy and chauvinistic, annoy Abby. Especially when they hit a chord with viewers. Then, Abby accidentally meets her new next-door neighbor, a handsome young doctor. In order to prove to her that he knows what makes men tick, Mike offers to leave the show if he cannot help Abby land the doctor as a boyfriend.

THE UGLY TRUTH has a lot of funny comic energy going for it, but there’s a lot of sexual vulgarity in the verbal sparring between the two romantic leads, played by Katherine Heigl and Gerard Butler. The movie also has a racy scene at a restaurant and a briefly depicted sex scene. Many obscenities and profanities also occur. Perhaps worst of all, there is very little morality to the movie’s portrayal of romance and sex.

(H, PaPa, Ro, B, LLL, V, SS, N, A, MM) Light humanist worldview with strong pagan elements and light Romantic elements in sex farce between two characters, one of whom tries to help the other land the ideal mate she has created in her mind, plus some light moral content in the male lead’s compassion toward his sister’s son, whose father is missing for some unexplained reason, and in the movie’s backhanded support of telling the truth; 58 obscenities (including a few “f” words), three strong profanities and 17 light profanities; light comic violence when tree limb breaks and woman hangs upside down from tree; strong sexual content includes crude verbal references to sex, oral sex, sex organs, a sex toy, and self-abuse, plus briefly depicted sex between man and woman; rear male nudity in a couple scenes and upper male nudity, plus romance eventually leads to the bedroom, one dream scene shows naked woman has objects hiding her nude torso in strategic places and woman accidentally sees man’s naked sex organ, but the nudity is not explicitly shown to the camera; alcohol use; no smoking; and, bickering married couple, romance leads to the bedroom, and woman pretends to be a different person than she is so that she can land a handsome young doctor as her boyfriend.

THE UGLY TRUTH is a sex farce centering on the age-old battle between the two sexes. It has a classic comedy structure that has attracted audiences for decades, but it contains many explicit, crude sexual references, which is why it is rated R.

The story in UGLY TRUTH is about the clash between a local TV producer in Sacramento, whose morning show featuring a bickering husband and wife team is failing, and the new romance guru she has been forced to hire to spice things up. The producer is a control freak who can’t find the perfect mate. The love guru’s deliberately racy and chauvinistic segment claims to reveal the “ugly truth” about how men operate. His shock jock style rubs the producer in all the wrong ways, especially when it hits a chord with the public.

Then, the producer accidentally meets her new next-door neighbor, a handsome young doctor. In order to prove to her that he knows men, the love guru offers to leave the show if he cannot help her land the doctor as a boyfriend. She accepts the challenge, so he begins to advise her on everything, from her hem line to her eating habits. After a comical start, his tips seem to work, but what they both didn’t count on is their own deepening feelings for one another.

THE UGLY TRUTH has a lot of funny comic energy going for it, but there’s a lot of sexual vulgarity in the verbal sparring between the two romantic leads, played by the talented Katherine Heigl and Gerard Butler. The sexual content also includes an extended bit about a pair of vibrating female panties and a briefly depicted sex scene. THE UGLY TRUTH also contains many obscenities and profanities.

As for the movie’s portrayal of the age-old battle of the sexes, it has several messages. First, the movie says that women need to admit the fact that most men are primal, simple creatures who need women to fulfill their carnal desires. Second, the movie says that men need to admit the fact that most women are nurturing creatures who need men to emotionally connect with them in deeper ways rather than just sexually. Somewhere and somehow, in the conflict between these two extremes, love blossoms. And, that’s the movie’s final message.

Ultimately, THE UGLY TRUTH fails to connect on a truly memorable level. Although the filmmakers have given some deeper thought to what makes men and women tick, its depiction of what makes its characters tick is more shallow. Thus, it doesn’t give viewers an underlying moral reason to root for these two people to get together. Both characters display their vulnerable sides, but their romance eventually only leads to the bedroom. This is more like infatuation, not love.