"Snakes in the Garden" 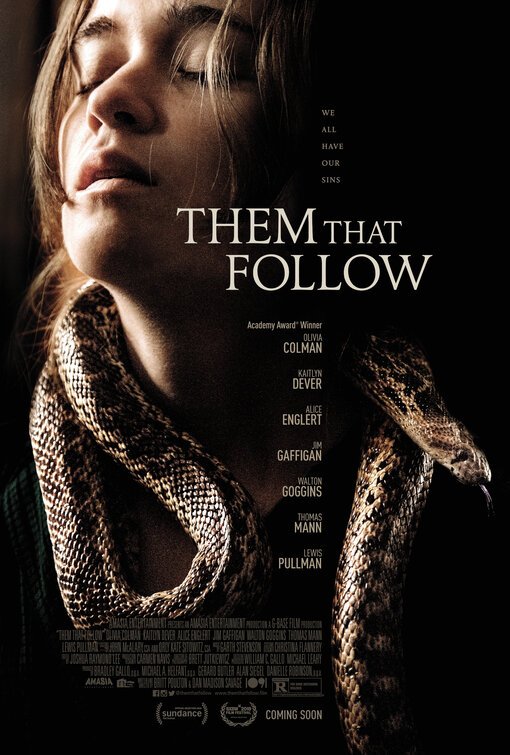 At its core, THEM THAT FOLLOW is a story about the youthful indiscretion of a young couple living in a small Christian Pentecostal community in the backwoods of Appalachia. The story takes place within a congregation that handles poisonous snakes in its worship services. In the main story, the pastor’s daughter finds out she’s pregnant by her boyfriend, a nonbeliever who’s left the church. What follows is a cascading succession of fateful events where nearly every member of the small church is tested in some aspect of their faith.

THEM THAT FOLLOW is constantly under the tension generated by just the thought of deadly snakes lurking in the background. It’s a gripping, brooding drama containing forlorn characters, who are the very opposite of a joyful church. Ultimately, the movie’s unsatisfying because the Christian setting seems a bit superficial and false. That said, the love story provides a poignant study of human passion and misguided faith. THEM THAT FOLLOW has a strong Romantic worldview, mixed with some false theology and a feminist subtext. So, media-wise Christian viewers will find THEM THAT FOLLOW unacceptable.

(RoRo, FeFe, AbAb, CC, FRFR, L, VV, S, AA, D, M):
Dominant Worldview and Other Worldview Content/Elements:
Strong Romantic worldview overall, with a feminist subtext that strongly implies or sees more traditional Christian beliefs as oppressive, especially to women, and includes a character who’s left the local church and doesn’t want to go back, mixed with overt Christian references (including elements of repentance, forgiveness and appeals to God) and false theology (some of it comes across as superficial and misleading), such as snake handling, snake handling is seen as an appropriate test of one’s faith and commitment to God, the church’s pastor sees baptism as one of the requirements for salvation, and a viewer might get the impression that romance between a man and a woman is more important than faith
Foul Language:
One obscenity and two profanities
Violence:
Strong and light intense violence includes menacing rattle snakes are shown, a snake bite takes place, the consequences of a snake bite in a person are depicted as sickness, skin discoloration, and a march toward death, man hits and chokes a woman, a man is threatened with a shotgun, and a shot goes off, and it’s implied a man’s arm is sawed off but not shown to prevent a snake’s venom from spreading further;
Sex:
Implied premarital sex when a woman gets pregnant
Nudity:
No nudity, but a woman is shown scantily clad with night clothes
Alcohol Use:
A man drinks until he’s inebriated
Smoking and/or Drug Use and Abuse:
A man smokes, and a woman smokes; and,
Miscellaneous Immorality:
People use snake handling in church services, and a woman steals a pregnancy test.

THEM THAT FOLLOW is a gripping, brooding movie about the religious practices of a small Christian Pentecostal snake handling sect in the heart of Appalachia. Setting aside the menacing poisonous snake aspect, which is always hanging over the story like a thick dark cloud, this movie is really about unrequited love and the conflicts that arise from being unequally yoked, which include the unfortunate consequences of youthful sexual indiscretion.

The manner in which the various characters in the story deal with the unexpected circumstances in which they find themselves within the confines of their religious faith, and how they manage their circumstances, ultimately defines the narrative of the movie, gives rich food for thought to viewers. Although this might be expected given the story’s setting, there are a few instances of intense violence, as well as some brief instances of smoking, drinking and foul language that are objectionable. So, viewers should consider these problems before making a decision to sit through this somewhat theologically misleading but taut emotional drama.

The movie opens with Mara (Alice Englert) showing a poisonous snake in its nest at the river’s edge to her boyfriend Auggie (Thomas Mann). Right at that moment, the action abruptly cuts to a kitchen scene where Mara is washing the dishes at home, and it appears that she was just daydreaming.

After finishing up her tasks, Mara meets her younger friend and neighbor, Dilly (Kaitlyn Dever). Both of them head out to the nearby country store where they purchase a few sundries. During a brief moment when nobody is looking, Mara takes a small package from one of the shelves and puts it in her purse. The movie later reveals the stolen item was a pregnancy kit and the reason for stealing it was that Mara didn’t want anybody to wonder why she would need such a thing in that tightly knit community. It appears Mara has been dating Augie surreptitiously while keeping their relationship a secret because she also happens to be Pastor Lemuel’s (Walton Goggins) daughter, and Augie is not a Christian. Mara loves him, however and wishes he came to the faith and attended church with her, but Augie won’t have any of it.

Meanwhile, Garrett (Lewis Pullman), a handsome young suitor, who’s a member of the church, begins courting Mara with her father’s approval. Caving under her father’s pressure, Mara goes along with plans that will lead to their eventual marriage. A short time later, however, Mara finds out she’s is pregnant with Auggie’s baby, and tries to rekindle their relationship hoping that he will finally start coming to church. However, Auggie’s adamant and informs Mara he’s actually planning to go away.

Mara chooses not to tell Auggie she’s pregnant. However, he eventually finds out about it from his mother, Hope (Olivia Colman), who is also a member of Pastor Lemuel’s church and had examined Mara earlier confirming that she was in fact pregnant. When Auggie finds out, his mother berates him angrily, and he breaks out into an uncontained emotional outburst, weeping long and bitterly as he faces the reality of what happened.

That very night, Auggie attends Mara’s church seemingly to make things right. At one point during the service, he decides to walk forward to the pulpit, and Pastor Lemuel leads him to participate in the snake handling ceremony, with disastrous results. What follows is a cascading succession of fateful events where almost every member of the small church is tested in some aspect of their faith. This forces them to confront the conflict that emerges between their beliefs and their lifestyles, leading to some unexpected outcomes.

The practice of snake handling in worship by some small Christian sects began and spread in the early to mid-1900s. It emerged from an unsupported interpretation of the Gospel of Mark 16:18 where it states that Christians will take up serpents and is later illustrated in Acts 28:3-6 by the Apostle Paul handling a poisonous snake without being killed, even though it clung to him and bit him. The use of snakes in worship has thus remained a fringe practice through the years but has never been validated, because it is clear from Scripture, and supported by relevant Commentaries, that, in the case of Paul, this was a single occurrence that took place without any related act of sacrifice or worship on his part, while Jesus himself admonished against these types of practices when he rejected Satan’s challenge in Matthew chapter 4:5-7.

Sadly, the screenplay appears to have been written from a cursory knowledge of Christianity rather than from deep religious study. Sometimes research alone isn’t the same as having a more grounded understanding of the Christian faith, which comes from being an integral part of a community of believers. To make things worse, the movie makes snake-handling an integral part of the story. Eventually, this plays more like a silly gimmick meant to drive the narrative forward than enlighten viewers. In the end, THEM THAT FOLLOWS leaves viewers with a plot that often doesn’t ring true. That said, some of the underlying situations and the romance at the story’s core are still very powerful in their own right. Those parts provide a poignant study of human passion and misguided faith in the backwoods of the heartland.

Walton Goggins, who stars as the mercurial, headstrong shepherd of the small snake-handling flock, brings to the screen a level of intensity that doesn’t let up until the very end. Alice Englert as the pastor’s daughter is equally commendable, although coming from the opposite end for portraying a quiet inner desperation while she cries out to God in repentance, to be delivered from her mistakes. Auggie, as the intense but aloof young man, provides a fitting but reluctant soul mate for Mara. Auggie wants to do the right thing first and accept the Lord second. Not to be left behind, Lewis Pullman as Garrett rounds out the love triangle as the immature, carnal foil whose flesh-driven passions betray his faith.

Ultimately, THEM THAT FOLLOW is intense and gripping but ultimately unsatisfying, despite a well-dramatized third act. It has a strong Romantic worldview with a feminist subtext that implicitly depicts more traditional Christian beliefs as oppressive, especially to women. Its overt Christian references contain false theology. For example, snake handling is seen as an appropriate test of one’s faith and commitment to God. Also, the romance between the star-crossed lovers is seen as more valuable than Christian faith. Finally, THEM THAT FOLLOW contains brief foul language and intense violence involving deadly snakes and a character being threatened with a shotgun.

Media-wise viewers, especially Christian ones, will find the movie unacceptable. Other viewers may be misled by the movie’s depiction of Christianity. In fact, an unsuspecting viewer of THEM THAT FOLLOW might walk away with a skewed vision of the Christian faith.