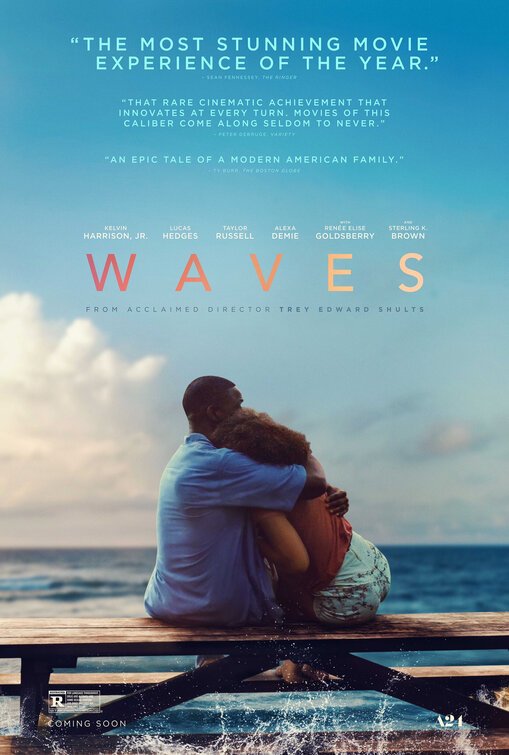 WAVES focuses on an average black suburban family in Florida, with a teenage son and daughter who are figuring out life one day at a time. Their father loves them but sometimes comes across as controlling and domineering. Tyler is a high school wrestling star. However, a shoulder injury puts him out for the season, his girlfriend becomes pregnant, and his world spirals out of control. When Tyler acts out irrationally, causing a great tragedy, his family tries to recuperate from his bad decisions.

This story takes a turn and shifts from focusing on the teenage son to his younger sister. WAVES is well written, with fine acting and great cinematography, but it takes a while to wrap up. Also, it has abundant, gratuitous foul language, some violence, teenage sexuality, and substance abuse. There are some Christian elements involving Scripture and being raised in church, but they really don’t have an effect on the characters. The movie’s worldview is Romantic, with the characters following their hearts more than anything else. The objectionable content in WAVES renders it unacceptable for media-wise viewers.

(RoRo, C, B, LLL, VV, SS, N, AA, DDD, MM):
Dominant Worldview and Other Worldview Content/Elements:
Strong Romantic worldview where most characters follow the desires of their hearts, regardless of what’s best for anyone else or looking to God for guidance, and most of the storyline focuses on emotional relationships, and one character makes some bad decisions because of family and social pressure, with some Christian elements as a family attends church and clearly has a faith of some kind, but it doesn’t seem to have much of an impact on their decision making, and there’s some light family reconciliation at the end, plus a pregnant teenage girls decides not to get an abortion
Foul Language:
At least, 151 obscenities and profanities (including three GDs and nearly 100 “f” words), plus six racial slurs, obscene gestures and vomiting shown a few times
Violence:
Strong violence with some blood when a character is hit in anger and accidentally falls and strikes their head and dies, plus a few lightly violent confrontations including pushing and slapping, and a guy punches a hole in the wall,
Sex:
One lightly depicted fornication scene showing two teenagers losing their virginity, two teenagers are shown taking a bath and a shower together, implied fornication between teenagers as a teenage girl becomes pregnant, and implied self-abuse as teenage boy watches pornography (nothing directly shown)
Nudity:
Upper male nudity shown a few times while working out, full rear male nudity shown multiple times in a men’s shower, girls are shown at a pool party in swimsuits, a girl is shown wearing an almost see through shirt, and implied nudity when a teenage girl and boy are shown in bath and shower without showing any body parts
Alcohol Use:
A few teenage party scenes where there is underage alcohol consumption, and a teenage boy is shown clearly intoxicated and even drives drunk
Smoking and/or Drug Use and Abuse:
Vaping shown, a teenager sneaks prescription pills from his dad for his pain and then becomes addicted and even snorts the pills, people are shown smoking marijuana a few times, two people discuss and then agree to take Ecstasy together, and a girl recalls how her mother overdosed; and,
Miscellaneous Immorality:
Major dysfunctional family shown throughout as a young boy extremely disrespects his father and stepmother and even gets physical with his father, a man left his wife and son, a young man hates his father for leaving and even says he deserves to have cancer, a teenage girl lies to her parents in order to take a trip with her boyfriend, teenage girl almost gets an abortion but can’t go through with it although her boyfriend becomes upset by her decision, and a racist moment element when a woman calls a black man the “n” word.

WAVES follows the journey of a suburban black family in Florida navigating their way through the complications and the challenges that life brings, especially when people make bad decisions.

Tyler is an average high schooler. He’s focused on wrestling and his girlfriend, Alexis. His father had an athletic knee injury that still causes him pain, but he wants Tyler to push himself as hard as he can and be the best he can be. Even after a wrestling match that went well, Tyler’s father still trains with him at home to make sure that, next time, he’ll win better and faster. Black people have to work harder to succeed, Tyler’s father tells him.

However, Tyler’s shoulder has been seriously bothering him. Instead of telling his parents about it, he just sneaks pain pills from his dad’s prescription. He even lies to his stepmother about his condition, after she forces him to get it checked out at the doctor. This works for a while, until a snap during a wrestling match puts him out officially for the season. Because of this, Tyler becomes seriously depressed, being unable to work out and hurting from his father’s extreme disappointment. As a result, Tyler hasn’t been able to spend as much time with Alexis as he’d like to spend. To make matters worse, when he finally does catch up with her, he learns she’s late on her period and getting concerned. A few days later, Alexis confirms her pregnancy, and Tyler’s life just got a lot more complicated.

Tragically, Tyler and Alexis decide to go to an abortion clinic. They try to ignore the screaming protestors outside of the office. Tyler sits and waits for Alexis, and she leaves the clinic really upset. While in the car going home, she tells Tyler she couldn’t go through with the abortion. She’s clearly extremely upset, but all Tyler can think about is what kind of impact this is going to have on his life. They argue and fight over it, and she gets out of the car and walks home. Later, she won’t answer his calls, but texts him that her parents support her decision, that she’s breaking up with him and blocking his number.

Alexis and Tyler were supposed to go to their school dance together, but Tyler sees she’s going with someone else. He has turned to substances to block out his pain, not only drinking alcohol but also crushing up and snorting oxycodone. Tyler just wants to talk to Alexis. He steals his father’s car keys, but is immediately caught by his stepmother, who recognizes his intoxication. He is at a breaking point, yelling at her and shoving his dad to the ground before taking off in his truck. He’s in no position to be driving and his anger is being fueled by the things he’s put into his body. When he gets to the party where Alexis is, Tyler’s younger sister, Emily, is there too, and she sees him follow his ex-girlfriend into the garage. Little does anyone know how, in the next few minutes, all their lives will drastically change.

Well produced, WAVES is heavily performance driven, with characters that are beautifully written to be at the true level of complexity that human beings are. Every actor in WAVES more than carries their own weight, which creates a powerful ensemble in the movie. The cinematography serves the story well, and some of the shots are very creative and inventive. Writer/Director Trey Edward Shults is quickly establishing himself as an acclaimed filmmaker. The only drawback with this particular story is that it takes a bit too long to finish up, thus creating a feeling that the ending should have come about 15 minutes earlier. Also, WAVES has a heavy amount of gratuitous foul language, including nearly 100 uses of the “f” word, plus some racial slurs. The overall worldview is mainly Romantic because the characters seem to follow their hearts and selfish desires, not looking to God or any type of moral guidance for help. Although the family in the movie attends church and seems to have an element of Christian faith in their lives, their Christianity doesn’t appear to affect their decisions or actions. Because of these things, as well as some violence, sexual immorality, and teenage alcohol and drug use, MOVIEGUIDE® finds WAVES to be excessive and ultimately unacceptable. WAVES could have been a great movie without all the unnecessary foul language, and if the filmmakers had looked into the true peace, love and deliverance that trusting in Jesus Christ can bring to us even in the most dire situations and incorporated that truth into their story.