WHERE ANGELS FEAR TO TREAD 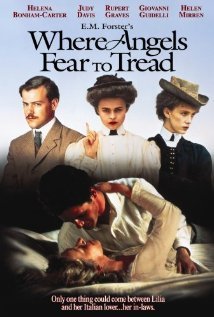 WHERE ANGELS FEAR TO TREAD is another E. M. Forster comedy of manners similar to his A ROOM WITH A VIEW. Here, Forster depicts a cross-culture clash between the English and the Italians which results in a toss-up but leans toward the Italians. The movie is superbly acted but somewhat lacking, especially in the scenes of the Tuscany countryside.

(H, L, S) A passable attempt to pierce the barriers that separate cultures slightly marred by one or two obscenities, one discreet sexual situation (within context of marriage), implied adultery, and a Fabian worldview.

This film adaptation of E.M. Forster’s first novel, WHERE ANGELS FEAR TO TREAD, tells about Lilia Herriton, a 33-year-old widow who embarks for Italy helped by her late husband’s family. After an indecently short interval, Lilia is engaged. Lilia’s dutiful brother, Phillip, is sent to investigate, checkbook in hand. Phillip discovers that Gino Carella is the 21-year-old son of an Italian dentist, and that he and Lilia are already married. Since Lilia’s late husband was a Herriton, the family feels responsible for her. Months later, the Herritons learn that Lilia died giving birth to Gino’s son and determine to retrieve the baby. Phillip and his sister, Harriet, return to Tuscany to introduce Gino to English ideas of right, wrong and responsibility. Cultures clash: Herritons vs. Gino–the English way versus the Italian way.

Tuscany is never as ravishing as it deserves to be; however, the acting is uniformly excellent even when the staging is too pedestrian. Overall, however, both sides needed to realize that God is not a respecter of persons, and in particular, that He “resists the proud” (James 4:6). As it is racism and classism, on both sides of the camera, seem to be the order of the day.

Rent or Buy WHERE ANGELS FEAR TO TREAD: